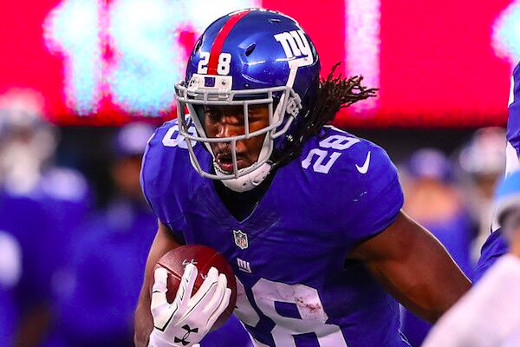 He’s suddenly in the mix for the starting job after Blake Bortles’ horrific showing against the Bucs on Thursday night. In fact, the The Florida Times Union's Ryan O’Halloran expects Henne to be under center come Week 1. He’d be piloting a conservative, run-heavy offense, though. Henne is only worth a look late in 2-QB drafts.

He continues to pull away from Samaje Perine in the race for the Week 1 starting job. Kelley isn’t an exciting player but is a value pick at his 10th-round ADP as the lead back in a strong offense.

He’s reportedly been splitting 1st-team reps with Paul Perkins in camp recently. Darkwa is averaging just 3.8 yards per carry for his career — and we’re still not betting on him beating out Perkins. But the situation is worth monitoring over the next couple of weeks.

The 7th-round rookie played 9 snaps with the 1st-team offense in Friday night's 2nd preseason game, turning 7 touches into 44 yards. RB Eddie Lacy got 13 snaps, while Thomas Rawls and C.J. Prosise sat out. Carson has reportedly been impressing in camp and could be working his way into a regular-season role.

The rookie backed up a buzzy spring with a 2-TD outing in his preseason debut. Golladay started to get 1st-team reps in camp this week and is on track to open the season as Detroit’s #3 WR. He’s an intriguing late-round flier.

He made his practice debut this week after offseason shoulder surgery. Ross has a lot of catching up to do but could still win a Week 1 role. He’s no more than a late-round flier in fantasy drafts, but Ross’ presence is good news for QB Andy Dalton.

Marqise Lee’s high-ankle sprain gives Hurns at least an early-season target boost. But it's tough to get excited about a secondary option in what figures to be 1 of the least productive passing games in the league.

He was 1 of 2 Cardinals WRs — along with Larry Fitzgerald — who HC Bruce Arians said “could play in the NFL” in a tirade this week. John Brown has struggled getting over a quad injury, and J.J. Nelson evidently hasn’t been good this summer. Jaron’s place on the depth chart is worth keeping a close eye on the rest of this month.

Rams insider Joe Curley expects Higbee to be the #2 option in Los Angeles’ passing game, behind only Sammy Watkins. While that feels a bit aggressive, we’re buying Higbee playing an increased role in his 2nd season. He could emerge as a fantasy spot-start option.

He’s in line to handle kicking duties in Tampa Bay this year after Roberto Aguayo was released last weekend.

He struggled mightily in Buffalo’s 2nd preseason game on Thursday night, completing just 8 of 18 passes with 0 TDs and 2 INTs. That’d be less concerning if we hadn’t been reading all August that Taylor has been struggling in camp. He’s gone from 1 of our favorite late-round QB targets to a risky QB2.

Bortles turned in an ugly effort in Jacksonville’s 2nd preseason game — even by his standards. Afterward, HC Doug Marrone refused to commit to Bortles as his starter. The Florida Times Union's Ryan O’Halloran even predicted that Chad Henne will be under center for the Jags come Week 1. Bortles is undraftable right now.

It looks like Kessler is out of Cleveland’s QB competition. He reportedly hasn’t been getting 1st-team reps in practice this week and will be the 3rd QB into Monday’s night’s preseason game against the Giants.

The Giants gift-wrapped Perkins the starting job this offseason, but he’s failed to grasp it. He’s been losing 1st-team reps to Orleans Darkwa in camp and was called out by HC Ben McAdoo after the preseason opener. Perkins’ fantasy value is saved only by the fact that he’ll only cost you a 7th- or 8th-round pick.

As expected, Mathews was released by Philly on Tuesday after being medically cleared from last year’s neck injury. We haven’t heard of any interest in him in the few days since.

Matthews suffered a chip fracture to his sternum in his 1st practice with Buffalo on Sunday. It’s especially bad news for a guy tasked with learning a new offense with a new QB just about a month before the season starts. Matthews will be tough to trust in fantasy lineups early on.

Both Brown and HC Bruce Arians seemed to suggest this week that the WR’s sickle-cell trait is impacting his ability to recover from injuries. Brown has been sidelined for the majority of the past 3 weeks with a quad injury. You can’t count on him as a weekly fantasy starter at this point.

He just can’t stay healthy. Perriman is currently dealing with a hamstring injury that’s had him out since August 1. It’s killed any chance he had of cutting into Jeremy Maclin and Mike Wallace’s targets early this season.

Lee suffered a high-ankle sprain last Sunday. That has him questionable-at-best for Week 1. Toss in Jacksonville’s shaky QB situation, and Lee isn’t worth drafting in most leagues.

The rookie underwent thumb surgery last weekend. He wasn’t looking like a redraft option before and certainly isn’t now.

He broke his foot. At some point. Or he didn’t. We don’t really know exactly what’s up with Reed at this point. He’s still on the PUP list, though, and remains 1 of the riskiest picks in your fantasy football draft.

He underwent knee surgery and is “week-to-week,” according to HC Chuck Pagano. Swoope is an intriguing player in an offense that makes heavy use of its TEs, but it’s tough to recommend using a draft pick on him now.

The Bears scooped Aguayo off waivers after he was release by the Bucs last weekend. He’ll compete with Barth for the starting job. Stay away from the situation in fantasy drafts until we know the winner.

He missed a 40-yard FG and an XP in the 2nd preseason game — then the Jags worked out Ks Dan Carpenter and Patrick Murray. Myers is on thin ice. Look elsewhere for your kicker on draft day.