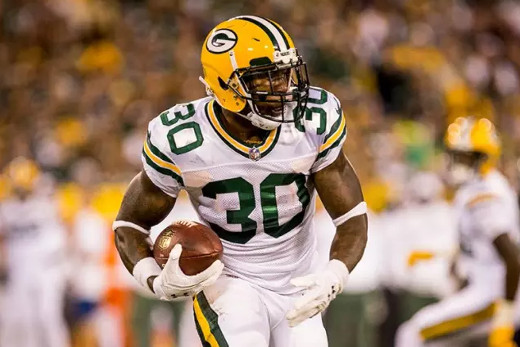 Williams seems to be solidifying himself as Green Bay's lead back. ESPN’s Rob Demovsky wrote this week that it could be the “Jamaal Williams Show” in the backfield this season. Williams was a top 10 fantasy RB over the 2nd half of last year.

Barber continues to run ahead of rookie Ronald Jones as Tampa’s clear starter. It looks like he'll at least open the season as a viable fantasy play.

He again got the start ahead of Isaiah Crowell in the 3rd preseason game, receiving all 5 carries on the Jets’ 1st possession. It looks like Powell will open the season with a significant role — and maybe even as the Jets’ lead back.

He inked a deal with the ‘Skins, who are searching for a lead ball-carrier after Derrius Guice’s season-ending knee injury. Peterson got significant run with the starters in Friday’s preseason game, carrying 11 times for 56 yards.

Williams was the 2nd RB in for New Orleans in the 2nd preseason game and is looking like the favorite to play behind Alvin Kamara during Mark Ingram’s 4-game suspension. That could make him a deep-league and DFS option.

Fantasy zombie. Michael won’t die, running with the 1st-team in the Colts’ 2nd preseason game. With Marlon Mack iffy for Week 1 and Indy’s rookie RBs struggling, Michael could open the year with a real role.

Charles Sims landed on IR with a knee injury this week, leaving Rodgers as the favorite for pass-catching work in the Bucs backfield. He’s still not worth a pick in drafts, though.

These guys are the favorites for the #2 and #3 WR jobs in Buffalo, according to insider Sal Capaccio. That’s not enough to make them draft-day targets, though.

Williams ran with the starters in Arizona’s 2nd preseason game. The 2017 3rd-rounder appears to be battling with Brice Butler and Greg Little for outside snaps. (Rookie Christian Kirk has been playing primarily in the slot.)

With Vance McDonald still sidelined with his foot injury, James is looking like the favorite to open the season as Pittsburgh's lead pass-catching TE. Week 1 brings a plus matchup against the Browns.

The 5th-round rookie beat out Cairo Santos for the starting job. Carlson is a fine draft target and figures to be a spot-start option all season in a strong Vikings offense.

The rookie has had a rough preseason, receiving very few 1st-team snaps. And RBs coach Tim Spencer called out Jones’ deficiencies in the passing game this week. It doesn’t look like he’ll be an early-season fantasy asset. And it's possible that he remains behind Peyton Barber on the depth chart all season.

He ran behind Bilal Powell again in the Jets’ 3rd preseason game — although Crowell ended up with 11 opportunities (carries + targets) vs. Powell's 6 with the 1st-team offense. This looks to be a committee backfield to open the season.

He got just 3 snaps with the starters in the 3rd preseason game, with Adrian Peterson dominating work with the starters. We’ll see if that carries over into the regular season, but Kelley is no more than a late-round flier now.

Hines has had ball-security problems and averaged just 2.4 yards per carry through 2 exhibitions. This backfield remains wide open, but Hines has lots of work to do to earn a role.

He suffered a Jones Fracture in his foot in practice this week and is expected to miss 4-6 weeks. McKissic is off the redraft radar.

Williams suffered a rib fracture and a "deep" hip bruise in San Francisco’s 2nd preseason game. He’ll miss the start of the season and isn’t worth a roster spot on your fantasy team.

Sims was placed on IR with the knee injury he suffered in Tampa’s 2nd preseason game.

West was dumped by the Saints on Tuesday.

HC Steve Wilks said this week that Kirk has "somewhat" played himself into the mix for the #2 WR job. In preseason action, the rookie has run behind Larry Fitzgerald in the slot and received little work with the 1st-team offense. Kirk will need to start getting snaps on the outside if he's going to make a 2018 impact.

Insider Sal Capaccio believes Coleman is in danger of not making the Bills’ 53-man roster. We’d be surprised if he ends up getting cut, but he’s not worth a pick in drafts right now.

After struggling with a hamstring injury for much of the spring and summer, Britt was cut by the Patriots this week.

He remains sidelined with the foot injury he suffered on July 29. The Steelers expect McDonald to be ready for Week 1, but it’s tough to see him in a significant role early this season after missing so much time.

He had surgery on Friday to repair a stress fracture in his foot. NFL Network’s Mike Garafolo reports that Hurst is expected to miss 3-4 weeks, but we’d consider him fortunate if he returns that quickly. The rookie isn’t an option in fantasy drafts.

Dickson has been sidelined all August with a groin/quad injury. HC Pete Carroll admitted this week that Dickson is “tremendously behind.” Dickson isn’t a fantasy option right now.

Shaheen went down in Chicago’s 2nd preseason game with a sprained ankle and foot. His status for Week 1 is uncertain.

Santos was released by the Jets after missing training camp with a groin injury.

Forbath was released by the Vikings after losing a battle to rookie Daniel Carlson.