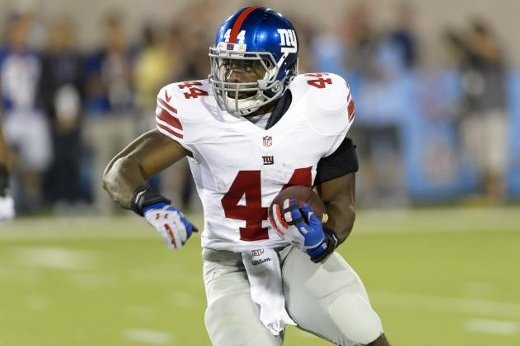 Manziel has “narrowed the gap” on Brian Hoyer, per insider Nate Ulrich, fueled mostly by a solid showing in an intrasquad scrimmage last weekend. Manziel took all the 1st-team reps in Monday’s practice. Hoyer will start Saturday’s preseason opener and still looks like the slight favorite to start the opener. But that could easily change over the next few weeks. Manziel is worth adding late in fantasy drafts.

Smith has done nothing to lose the starting job through a couple weeks of camp. He’s shown improved accuracy and decision-making and went 4-of-6 for 33 yards in the preseason opener. With a year of experience under his belt, an improved supporting cast and sneaky rushing ability, Smith is an intriguing QB2 in fantasy.

The rookie flashed in the Hall of Fame Game, busting off 37 yards and a score on 5 carries. The team reportedly “already loves” Williams as a runner. We’re not expecting him to push Rashad Jennings out of the lead role, but Williams could see 6-10 carries per game this season, including goal-line work. That could make him a RB3 or flex in your non-PPR league.

Taylor is listed as the #2 RB on the Cardinals' initial depth chart, ahead of RB Jonathan Dwyer. That spot could give Taylor sneaky fantasy value considering the Cards don’t want to overwork Andre Ellington.

The buzz on Hillman continued this week, with HC John Fox calling him “drastically improved.” With Montee Ball out, Hillman started the preseason opener. He picked up 15 yards and a score on 6 carries. More importantly, he was solid in pass protection and held on to the football. As long as he hangs on to the #2 spot, Hillman could see 100+ touches this year as a change-of-pace back behind Ball.

With DeMarco Murray and Lance Dunbar sitting out, Randle drew the start in Dallas’ preseason opener – a clear sign that he’s ahead of Ryan Williams for the #3 job. Randle totaled 50 yards on 13 carries, impressing HC Jason Garrett with his vision and decisiveness. If Randle hangs on to the #3 spot, he’d likely share the backfield with Dunbar in the event of a Murray injury.

Williams has been working as Buffalo’s #2 WR in training camp and played with the 1st-team in each of the team’s first 2 preseason games. If he continues to hold off Robert Woods, Williams will be worth drafting as a spot starter. He could lead the Bills in receiving TDs this year.

Holmes was listed as a starter on Oakland’s initial depth chart. That follows a strong finish to the 2013 season that saw him rack up 22 catches, 366 yards and a score over his final 5 games. At 6'4, 210 pounds with 4.5 speed, Holmes has the look of an intriguing late-round flier.

The knee Kelce had surgery on last year didn’t appear to be an issue on Thursday night, when Kelce jetted through the Bengals secondary for a 69-yard TD. This guy has a chance to emerge as a top-3 option in the Chiefs passing attack. Draft him as a high-upside TE2.

The rookie has been flashing in camp and impressing the coaching staff by how quickly he’s picked up the offense. Seferian-Jenkins is easily the most talented TE in Tampa. He probably won’t emerge as a reliable weekly fantasy option this season, but he could be an upside spot-starter.

David Ausberry’s knee injury puts Rivera back in the driver’s seat for the starting job. He had a solid rookie season but is nothing more than a low-upside fantasy backup.

Veteran Shayne Graham seemed like the heavy favorite to win the Saints’ starting job. But Dimke has reportedly been better in camp so far. Avoid this situation in fantasy draft until a winner emerges.

Vick’s chances of winning the Week 1 starting job are getting slimmer by the day. He was the clear #2 in Thursday’s preseason opener, going 3 for 6 for 17 yards. He’s not worth drafting at this point.

Wilson’s neck issues forced him to retire from football.

Dwyer has fallen behind Stepfan Taylor for the backup job. Unless that changes, Dwyer isn’t worth drafting.

Anderson is clearly behind Montee Ball and Ronnie Hillman. The concussion he suffered in Thursday’s preseason opener won’t help him climb the depth chart.

Woods continues to work behind Mike Williams. He should at least end up as Buffalo’s #3 WR, but that spot wouldn’t give him much fantasy value.

Givens seems to have fallen behind Tavon Austin, Kenny Britt, Brian Quick and Stedman Bailey in the pecking order. He’s not worth drafting in fantasy unless we see him climb back up the depth chart.

Moore is listed on the 3rd team on Oakland’s initial depth chart. Insider Paul Gutierrez believes he’s on the roster bubble. Don’t bother with him in fantasy drafts.

Wilson fractured his collarbone in practice on Monday. Expect him to be out 6-8 weeks. It hurts his chances of making an early-season impact, but he should still take over as Chicago’s #3 WR by mid-season. Wilson is still worth targeting late in best-ball leagues.

Abbrederis tore his ACL in practice on Wednesday and is done for the season. He was unlikely to be a fantasy factor this season anyways.

Ausberry underwent knee surgery. There’s no timetable for his return. Ausberry was looking like the favorite to open the season as Oakland’s top pass-catching TE. Now he’s not worth considering in fantasy drafts.

Lyerla will miss multiple weeks with a sprained knee. It kills any chance the rookie had to win the starting job out of training camp. Lyerla remains an intriguing dynasty prospect but is off the redraft radar for now.

Graham has reportedly been out-kicked by 24-year-old Derek Dimke early in camp. Stay away from this situation in fantasy drafts until a winner emerges.