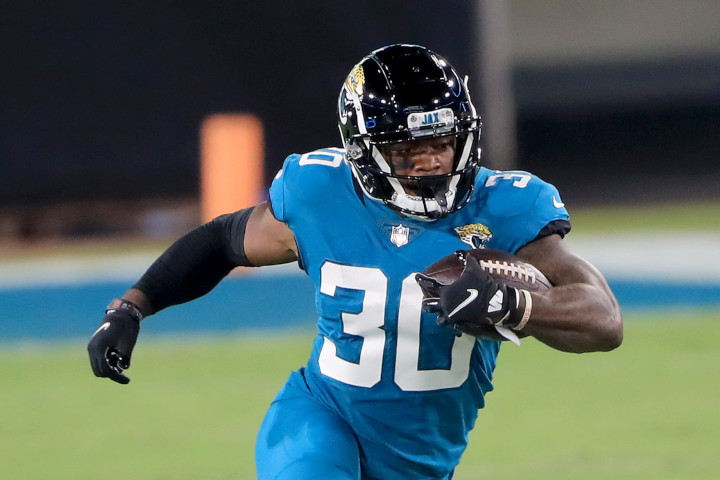 Wentz returned to practice on Monday and is “optimistic” that he’ll be ready for Week 1. He conceded that it’ll ultimately be the doctors’ call, but Wentz is certainly trending in the right direction.

Bridgewater was named Denver’s starter after an impressive performance in the 2nd preseason game. He still sits low in QB2 territory in the rankings -- but a strong group of weapons could make him a spot-start option this year.

He was named New Orleans’ Week 1 starter after a strong showing in the 2nd preseason game. Winston is good news for RB Alvin Kamara and the Saints’ WRs. But Winston himself isn't a very attractive fantasy option. He'll be working with an underwhelming group of pass catchers until WR Michael Thomas returns. And Taysom Hill still figures to steal snaps, especially in the red zone.

He’s Jacksonville’s clear lead back after Travis Etienne’s season-ending foot surgery. We’ll see exactly how much Carlos Hyde mixes in, but Robinson looks like at least a solid RB2. And there’s RB1 upside if he plays a role similar to last year’s.

The Sony Michel trade clears up New England’s backfield a bit. Harris is atop the depth chart as the lead ball-carrier for now (although he’ll still lose most of the pass-catching work to James White). Stevenson is directly behind Harris on the depth chart -- and a nice late-round flier in fantasy drafts.

These guys operated as Miami’s top 2 RBs with the 1st-team offense in the 2nd preseason game. And they’ve both looked much better than RB Malcolm Brown. This backfield remains a bit of a mystery heading into Week 1. But consider Gaskin a risk/reward RB3 as the likely leader; Ahmed an interesting late-round flier.

We nudged him up the rankings with RB D’Andre Swift’s Week 1 status a bit murky. Williams would likely be a 3-down back if Swift misses time this season.

He’s looked excellent this preseason and out-snapped RB Zack Moss 21 to 12 with the 1st-team offense in the 2nd exhibition. This will still be a committee backfield -- but Singletary might open the season as the leader.

These guys split 1st-team work in the 2nd preseason game: 10 snaps for Coleman, 9 for Johnson. RB Michael Carter got 0 snaps with QB Zach Wilson. We’re still projecting the rookie to lead this backfield in fantasy points over the course of the season. But Coleman and Johnson are worth a look late in your draft.

He was dealt to Los Angeles, where he’ll join Darrell Henderson in the backfield. We’ll see how the situation sorts out, but ESPN’s Adam Schefter opined that Michel will "probably be the lead back.” Consider him a RB3 with upside for now.

HC Sean Payton reportedly told ESPN’s Steve Levy prior to Monday night’s preseason game vs. Jacksonville, "If you’re asking me today, my #2 RB is Tony Jones.” Jones has out-played RB Latavius Murray this preseason and will be a high-end handcuff if he wins that #2 job.

Cooper played 13 snaps in last Saturday's preseason game vs. the Texans, so it seems like we can stop worrying about his surgically repaired ankle now.

Callaway was the star of the 2nd week of the preseason, hauling in all 5 of his targets for 104 yards and 2 TDs on Monday Night Football. He looks like New Orleans’ #1 WR to open the season.

The rookie has passed the eye test with flying colors this preseason, snagging 6 of 8 targets for 138 yards. WR Curtis Samuel leaves behind 97 targets, so there’s room for Marshall to become a fantasy factor even behind D.J. Moore and Robby Anderson.

Indianapolis released K Eddy Pineiro this week, locking in Blankenship as the starter.

He’s atop Cleveland’s depth chart after K Cody Parkey was placed on IR with a quad injury.

He lost the starting QB battle to Jameis Winston. There’s still a decent chance that Hill gets some starts this year, but he’s not worth stashing outside of 2-QB and Superflex leagues.

He’ll open the season backing up QB Teddy Bridgewater and is off the fantasy radar for now.

Etienne will miss his entire rookie season after undergoing surgery to repair a Lisfranc tear in his left foot. He should make a full recovery for the 2022 campaign.

HC Dan Campbell said Tuesday that he’s not sure what kind of shape Swift will be in -- or if he’ll even be available -- for Week 1 after he missed a lot of August with a groin injury. Swift reportedly had a nice practice later that day, so we’re not panicking yet. But we did nudge him down the rankings.

Henderson appears to be back in a committee with the arrival of RB Sony Michel this week. We’ll see how the situation shakes out, but Henderson is now a risky RB2 target.

The rookie got 0 snaps with QB Zach Wilson and the 1st-team offense in the 2nd preseason game. We’re still projecting Carter to lead this backfield in fantasy points over the course of the season -- but it doesn’t look like he’ll be a starting option early on.

He played behind and was out-played by RB Devin Singletary in the 2nd preseason game. Moss might open the season as the 1B in this backfield.

Tony Jones is reportedly the favorite for the #2 RB job in New Orleans, leaving Murray as a potential cut candidate.

After starting the preseason opener, Brown operated the #3 RB in Miami’s 2nd exhibition. This backfield remains murky, but both Myles Gaskin and Salvon Ahmed have looked better than Brown.

It looks like this might be an ugly 3-headed committee (on a bad offense). Phillip Lindsay and Mark Ingram shared early-down work in the 2nd preseason game, with David Johnson handling 3rd downs. Avoid.

These guys are back off the fantasy radar after the Rams traded for RB Sony Michel this week.

Campbell has had some funky preseason usage, only playing in 3-WR sets -- and playing on the outside, rather than the slot. It’s possible that Zach Pascal opens the year as the Colts’ starting slot receiver, in between Michael Pittman and T.Y. Hilton.

St. Brown has only played in 3-WR sets this preseason. He’ll struggle for reliable fantasy value as long as that usage continues.

Cole got 0 snaps with the starters in the Jets’ 2nd preseason game. He’s off the fantasy radar for now.

Trautman is expected to miss 1-3 weeks after suffering a foot injury in Monday night’s preseason game. We’ll see if he’s ready for the season opener -- but Trautman was already trending down before this injury.

He was placed on IR this week with a quad injury.