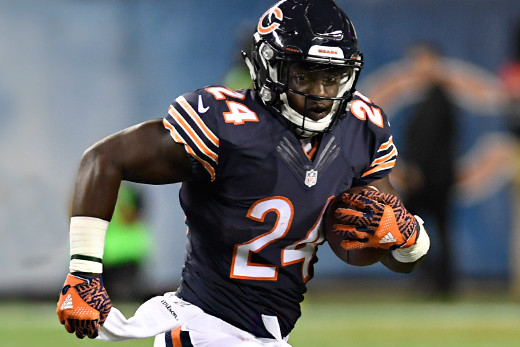 Howard saw encouraging usage this preseason, playing 72% of Chicago’s 1st-team snaps and splitting 3rd-down work with RB Tarik Cohen. By comparison, Howard posted 68.6% and 58.3% snap rates in his first 2 seasons. If the increased playing time continues into the regular season, he’ll carry a higher weekly floor than he has the past 2 years.

Michel returned to practice this week, although he remains limited. The rookie won't be an early-season fantasy option but retains big upside. His ADP has fallen into the late 7th round.

Morris ripped off 84 yards on 17 carries in San Francisco’s 3rd preseason game. He still figures to be behind Jerick McKinnon and Matt Breida on the depth chart. But he looks capable of making a fantasy impact this season if given an opportunity. Put him on your waiver-wire watch list.

This rookie has worked himself into the mix for playing time during RB Mark Ingram’s 4-game suspension, according to ESPN’s Mike Triplett. Scott finished the preseason with a 4.8 yards-per-carry average. We’ll see exactly how the work is divvied behind RB Alvin Kamara those first 4 weeks. For now, Scott is worth keeping on your radar.

With WR Alshon Jeffery expected to miss at least the first 2 weeks of the season, Agholor is in line to serve as Philly’s #1 WR. Note that he ranked 28th among WRs in PPR points last year and led the Eagles in both red-zone targets and targets inside the 10. Agholor is still only being drafted as WR38 over the past week.

These are your top 3 receivers in Jacksonville after Marqise Lee's season-ending knee injury. After Lee exited that 3rd preseason game, Moncrief played 32 snaps, Cole 28 and Westbrook 26. So it looks like all 3 guys will be heavily involved in what’s still a run-heavy offense. That limits the upside, but all 3 are worth looks in the double-digit rounds of drafts. We rank them Cole-Westbrook-Moncrief heading into Week 1.

Enunwa started the 3rd preseason game and finished with 2 catches for 28 yards. He could play a significant role this year, especially with WR Jermaine Kearse (abdomen) expected to miss the opener.

Ebron flashed in Indy’s 3rd exhibition, hauling in 5 balls for 54 yards, including a 15-yard TD from QB Andrew Luck. He remains behind TE Jack Doyle in the pecking order, but Ebron could still play a big role this year with the Colts’ WR looking thin.

Jones got extensive run in the 4th preseason game (not good). He carried 10 times for 4 yards (really not good). The rookie finishes the preseason with .8 yards per carry on 28 attempts. He looks nowhere near ready to make a fantasy impact.

HC Todd Bowles said this week that McGuire won't be ready for Week 1 due to the broken foot he suffered in late July. McGuire could miss time beyond that and isn’t worth a roster spot.

He was cut by the 49ers on Friday. Williams suffered a rib fracture and hip bruise in the 2nd preseason game but is healthy now, according to NFL Network's Tom Pelissero. We'll see where he lands, but Williams is obviously off the redraft radar.

He was placed on IR with a hand injury suffered in the preseason finale. Vereen probably wasn’t going to make the final roster anyway. The Saints are set to roll with Alvin Kamara, Jonathan Williams and Boston Scott atop the RB depth chart to open the season.

Baldwin labeled himself 80-85% this week and admitted that his knee issue is something he’ll need to manage all year. He’s a risky pick at his 3rd-round ADP.

Jeffery (shoulder) was activated from the PUP list but is expected to miss “at least” the first 2 games of the season, according to ESPN’s Adam Schefter. It might be October before we can trust him in fantasy lineups.

He’s expected to miss Week 1 after undergoing surgery for an abdominal injury. Kearse could return to a limited role if Quincy Enunwa and/or Terrelle Pryor impress in his absence. He's not worth a roster spot.

Decker announced his retirement on Sunday. It sounds like he wasn’t going to make New England’s final roster.

The Texans released Miller on Friday. The former QB and 3rd-round pick totaled just 34 catches in 2 seasons in Houston. The Texans will roll with Bruce Ellington and rookie Keke Coutee as slot options behind DeAndre Hopkins and Will Fuller.

He was cut by the Texans on Friday. Ryan Griffin will open the year as Houston's lead TE, with rookie Jordan Akins backing him up.