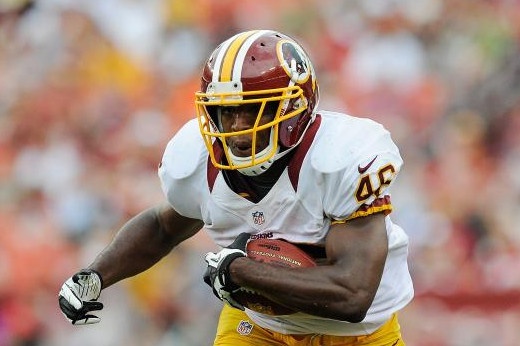 Brady’s 4-game ban was overturned on Thursday, setting him up to play a full 16 games. He ascended to low-end QB1 territory in our rankings, although his ADP figures to climb higher than that.

Cousins was named Washington’s starter for the entire season. (But we wouldn’t be shocked if he’s benched at some point.) He’s nothing more than a risk/reward matchup play.

McFadden averaged 5.9 yards per carry in 2 preseason games and appears to still have some gas in the tank. All indications are that Dallas’ backfield will be a committee attack this year. We’re not falling over ourselves to draft McFadden, but he’s a better shot in Round 11 than Joseph Randle is in Round 4.

After a rough start to training camp, Johnson has built some momentum over the past couple of weeks. The release of RB Robert Hughes opens up short-yardage work for the rookie. We’ll see if he can carve out a more significant role.

OC Pat Shurmur reiterated this week that the team wants to get Sproles more involved this year. He looked ready for a bigger role in the 3 rd preseason game, hauling in both of his targets for 41 yards and a score. Sproles is a nice bench stash and potential RB3 in PPR leagues.

This rookie was 1 of the most impressive players in the NFL this preseason, ripping off 139 yards and a score on 20 carries. HC Jay Gruden called Jones a “very integral part” of the running game this week. He could be a threat to RB Alfred Morris’ early-down work. And a Morris injury would make Jones a weekly fantasy starter.

With Todd Gurley still working his way back and Tre Mason dealing with a hamstring injury, Cunningham might lead the Rams backfield in Week 1 touches. The problem is that St. Louis opens against the Seahawks.

Lewis will open the season as New England’s 3 rd-down back, according to insider Erik Scalavino. We’ll see whether he hangs onto that gig all year, but he’s at least an intriguing flier in PPR leagues. Shane Vereen averaged 4.1 catches per game as the Patriots’ 3rd-down back over the last 2 seasons.

Health remains a question mark here after Williams was hospitalized a couple of weeks ago. But the rookie looks like a good bet to emerge as Buffalo’s #2 RB. That makes him an intriguing stash with LeSean McCoy still dealing with a hamstring injury.

Cruz’s calf trouble has Randle looking like the #2 WR at least to begin the season. He could easily hang on to that gig all year.

The rookie made his practice debut on Monday and even got on the field for Thursday night’s final preseason game. He’s ready for the start of the season after undergoing June foot surgery. Parker won’t be an early-season fantasy option but could quickly emerge as a weekly starter.

Here’s the Jets’ starting TE after Jace Amaro (shoulder) was placed on IR. Cumberland isn’t worth rostering and isn’t particularly likely to emerge as a matchup option.

Lewis figures to open the season as Jacksonville’s lead pass-catching TE with Julius Thomas expected to miss the first 3 weeks. You should be able to do better for your fantasy squad, though.

Scobee was dealt to Pittsburgh, where he’ll kick for a top-end offense. He’s a fine fantasy starter.


Stock Down - These players have moved down the Draft Sharks rankings over the past week.

After a strange concussion situation where he was cleared and then un-cleared, RG3 was benched in favor of Kirk Cousins. We might have seen him in a Redskins uniform for the last time. Griffin isn’t worth rostering in redraft leagues.

Jimmy G was stripped of a 4-game cameo when Tom Brady’s suspension was overturned. Brady is now a strong bet to play 16 games, so Garappolo isn’t worth rostering in redraft leagues.

McCoy remains sidelined with his hamstring injury and might not be “fully ready” for Week 1, according to ESPN’s Josina Anderson. The hammy issue also has the potential to linger. McCoy is a risky pick even at the end of Round 2.

Morris has a hot rookie on his tail pushing for carries. And the benching of QB Robert Griffin figures to hurt his production.

Randle was out-played by Darren McFadden in the 3 rd preseason game and finds himself in what’s expected to be a committee backfield. Randle is way over-priced at his 4th-round ADP.

Bernard’s role in the offense seems to be shrinking. Jeremy Hill is the clear-cut lead ball-carrier, and Rex Burkhead looks set to play a pass-catching role. Draft Bernard only as a RB3 in PPR leagues.

Mason went down with a hamstring injury in the 3 rd preseason game and is questionable for Week 1, per HC Jeff Fisher. Mason’s value was largely based on early-season starts while RB Todd Gurley works his way back.

Turbin was waived/injured by the Seahawks on Friday night. He’s dealing with a high-ankle sprain that’ll cost him at least the first few weeks of the season. Turbin is eligible to be claimed off waivers. If he’s not, he’ll head to Seattle’s IR.

The rookie looked good in the 4 th exhibition before cracking a rib. That could land him on IR. Even if Ajayi makes the roster, he’ll be 3rd on the depth chart and not worth rostering in redraft leagues.

Cruz has been sidelined for a couple of weeks now with a calf injury. It’s unclear if it’s related to last year’s patellar tendon injury, but it has him iffy for the start of the season. We’re not buying Cruz as a fantasy asset this year.

Toon was released this week after spending the summer tumbling down the Saints depth chart. He figures to get another shot elsewhere, but don’t draft him.

Thomas underwent surgery to repair a finger tendon this week and is expected to miss the first 3 games of the season. He’ll return as a low-end TE1 with significant injury risk. He’s only worth considering in the double-digit rounds.

Amaro was placed on IR with the shoulder injury he suffered in the preseason opener.

Barth was dumped by the Bucs a week after being released by the Broncos.