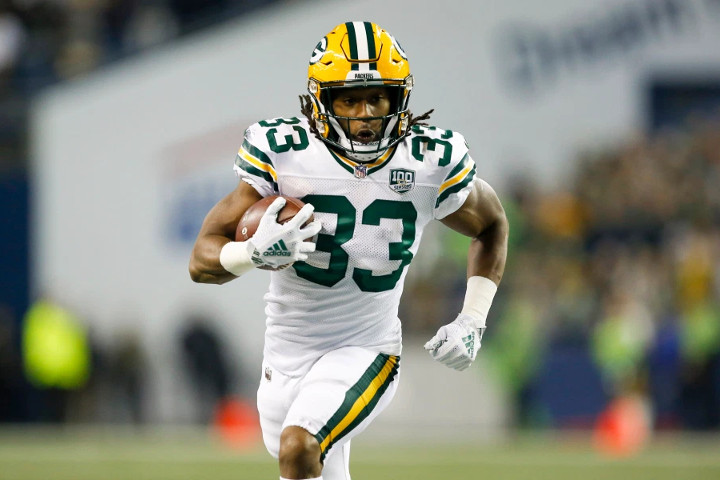 Three notes on last week’s lineup, which came about 10 points short of cashing:

I’m going to follow my own advice and pay all the way up at QB this week. Murray is having a historic season. In fact, he’s on pace the score the most fantasy points by a QB all time — more than 2018 Patrick Mahomes and 2019 Lamar Jackson.

Murray figures to find himself in a shootout against the Bills on Sunday. The game has a huge 56-point over/under. And Arizona’s 29.25 implied total is 2nd highest on the week.

Buffalo’s defense is nothing to worry about. It ranks 15th in Football Outsiders’ pass defense DVOA and 22nd in run defense. The Bills sit 27th in adjusted fantasy points allowed to QBs.

If you do wanna pay down at QB, Carson Wentz ($5,900) is your best bet with the Eagles offense looking as healthy as it has all season coming out of the bye.

Spots don’t get much better than this. Jones’ Packers are 13.5-point home favorites with a massive 31.75 implied total against a Jacksonville squad sitting 21st in Football Outsiders’ run defense rankings.

With David Johnson likely to miss Week 10 with his concussion, it’ll be Duke, Buddy Howell and likely practice-squad call-up C.J. Prosise in Houston’s backfield. Look for Duke to soak up close to 100% of the backfield touches.

We’ve rarely seen Johnson in a voluminous role. In fact, he’s received double-digit carries in a game just 5 times in his entire NFL career and topped 13 carries once. But he sports a career 4.3 yards-per-carry average and has always been a strong pass-catcher, averaging 9.2 yards on 293 receptions. Remember, too, that this guy is the Miami Hurricanes’ all-time leader in career rushing yards — ahead of guys like Edgerrin James, Clinton Portis, Frank Gore and Willis McGahee.

So Johnson is plenty capable of taking advantage of this opportunity. He draws a Browns defense that Football Outsiders ranks 18th against the run and 31st in RB coverage. Cleveland sits a middling 14th in adjusted fantasy points allowed to RBs.

There are certainly holes to poke in Davis’ Week 10 outlook. He faded as Carolina’s lead back, totaling just 168 yards and 1 TD over his final 3 starts. And he gets a rough matchup on Sunday vs. a Bucs squad sitting 3rd in Football Outsiders’ run defense rankings, 4th in RB coverage and 10th in adjusted fantasy points allowed to RBs.

But we simply don’t pass up feature backs priced at $4,000 in cash games. Davis is a strong bet for 15+ touches — including a handful of catches — which makes it tough for him not to pay off this price tag.

I didn’t include Chase Edmonds ($6,300) here because Kenyan Drake is trending toward returning for Sunday’s game vs. the Bills. If Drake remains out, though, consider using Edmonds instead of Duke Johnson.

Allen is the best target bet in football outside of maybe Davante Adams. Maybe. And Allen is $1,900 cheaper than the Packer this week.

Allen has seen 10+ targets in all 6 healthy games with QB Justin Herbert. He’s averaged 12.7 targets and 23.4 DK points in those outings.

Allen’s versatility will benefit him in Sunday’s game against the Dolphins. He’s played 55% of his snaps on the outside this season and 45% in the slot. So while he’ll see some of CBs Xavien Howard and Byron Jones, he’ll also get plenty of slot CB Nik Needham, who ranks 77th among 103 qualifying CBs in Pro Football Focus’ coverage grades. He’s allowed a 69% catch rate and 8.5 yards per target in coverage.

We’re on weather watch in Cleveland, with the early forecast predicting wind gusts of 40+ mph on Sunday. We saw similar conditions back in Week 8, when Baker Mayfield and Derek Carr combined for just 233 passing yards. So if the forecast holds, we’ll need to get off Cooks.

But if we don’t get that wind, he’s my favorite WR value. In 4 games since Bill O’Brien was canned, Cooks is averaging 9.8 targets, with 9+ in every game. He’s also 14th among WRs in air yards over that span. He’s basically getting WR1 usage and has averaged 21.3 DK points over those 4 games.

With Preston Williams on IR, Miami is down to Jakeem Grant and Mack Hollins behind Parker on the depth chart. So Parker should see a big chunk of the targets from QB Tua Tagovailoa.

I don’t wanna spend too much time on this one because it’s so freakin’ gross. But Amendola has totaled 24 targets in 3 games without Kenny Golladay this season. If T.J. Hockenson’s toe injury keeps him out of Sunday’s game against Washington, Amendola will be a good bet for another 8+ targets — and at least worth considering as a cheap cash play.

He’s not the safest play in just his 2nd game back from that ankle injury. But “safe” isn’t really a thing at TE outside of Travis Kelce, who’s on bye this week, and Darren Waller, who’s $1,700 more expensive.

Goedert caught his lone target in his return vs. the Cowboys before the Week 9 bye. But he played 84% of the Eagles’ offensive snaps and ran a route on 74% of QB Carson Wentz’s drop backs. He’s not even listed on this week’s injury report and should be a full-go for Sunday’s game vs. the Giants. Goedert racked up 17 targets — a 20% share — in his 2 healthy games to open the season. And that was with TE Zach Ertz, who remains out this week.

The Saints are coming off a 38-3 demolition of the Bucs. Now they get a home game for a 49ers squad that’s been ravaged by injuries. QB Jimmy Garoppolo, TE George Kittle, WR Deebo Samuel and RBs Raheem Mostert and Tevin Coleman are all out for this one.

The Saints are 10-point favorites, so QB Nick Mullens figures to be dropping back early and often. And the 49ers’ 19.25-point implied total is 2nd lowest on the main slate.