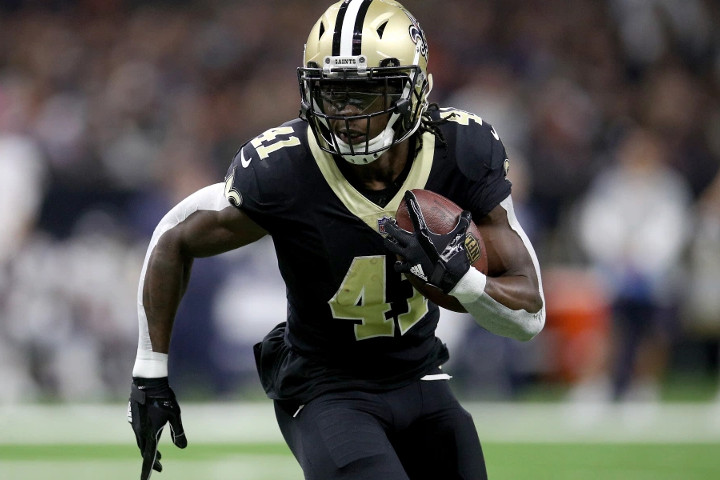 We ran our winning streak to 3 last week, cashing all doubleups and 97% of head-to-heads.

The key to Week 3 was playing at least a couple of Seahawks. Wilson and Lockett carried this team, covering up disappointing outings from Kenyan Drake and Miles Sanders.

This lineup is also a reminder of why going cheap at DST makes sense. I cashed despite getting a goose egg from the $2,000 Jets because they allowed me to load up elsewhere.

Week 4 looks challenging — 1 of those weeks when there are too many good plays. We have 9 teams on the main slate with an implied total of 27+ points.

Expect the cash lines on DraftKings this week to be higher than normal. That means we’ll want to put a bit more emphasis on upside in our cash lineup.

Let’s get to the picks …

I won’t talk you out of paying up for 1 of the stud QBs this week. That’s been the optimal move so far this season and might continue to be considering how many points these guys are racking up.

Now he gets a home game for a Seahawks defense that’s allowed the most DK points to QBs this season. Matt Ryan got ‘em for 27.9 points in the opener, Cam Newton went for 38.6 in Week 2 and Dak Prescott scored 33.5 last Sunday.

This matchup will get even better if Seahawks S Jamal Adams sits with his groin injury.

Kamara leads all RBs in DK points through 3 weeks. He’s carried just 31 times but has racked up 27 catches for 285 yards and 3 scores. His 31 targets rank 5th league-wide.

That kind of usage is gold in DK’s full PPR scoring. Kamara is at least $500 underpriced for a sweet Week 4 matchup vs. the Lions. Detroit ranks 29th in Football Outsiders’ run defense DVOA and 23rd in RB coverage. So Kamara should do damage on the ground and through the air on Sunday.

Kenyan Drake ($6,000) and Joe Mixon ($5,800) are important decision points this week. They’re both talented runners in nice matchups, but their passing-game usage has been disappointing so far.

Consider Drake and Mixon for your flex spot — but spend the extra few hundred bucks to get Edwards-Helaire in your lineup.

There are no passing-game questions here. CEH has racked up 16 targets through 3 weeks, including 14 over the past 2. And he’s been a workhorse on the ground, carrying 55 times.

Edwards-Helaire is a big home favorite with a 29.75-point implied total this week. And the Patriots matchup is not one to fear. New England sits 19th in Football Outsiders’ run defense rankings and has allowed 4.5 yards per carry to RBs. The Pats also rank 24th in RB coverage, per FO, and have allowed the 10th most RB catches.

We’re always chasing volume. Allen is as strong a target bet as any WR on the main slate.

He’s seen an absurd 29 targets — a 35% share — in QB Justin Herbert’s 2 starts. Allen should continue to gobble targets, especially with WR Mike Williams likely out this week with a bum hammy.

He’s been relatively disappointing so far, with single-digit DK points in 2 of 3 games to open the season.

Big games are coming, potentially this week in an up-tempo matchup against Arizona. Moore will see his fair share of CB Patrick Peterson in this one, but that’s no longer a matchup to fear. Peterson ranks 67th among 90 qualifying CBs in Pro Football Focus’ coverage grades.

Cooks was on my shortlist even before Will Fuller popped up on Thursday’s injury report with a hamstring. After being limited in the opener, Cooks has played 89% of Houston’s offensive snaps, ran a pass route on 90% of Deshaun Watson’s drop backs and garnered a 20.6% target share over the last 2 games.

$4,500 is too cheap for any WR seeing that type of usage. It’s especially cheap for a proven producer in a plus matchup against a Vikings defense that’s allowed the 3rd most DK points to WRs.

I’m gonna ignore Waller’s Week 3 dud. And I’m gonna ignore what looks like a tough matchup against the Bills, who have been tough on TEs when their LB corps has been healthy.

This is simply a volume play. Waller tallied 24 targets over his first 2 games. Vegas will be without WRs Henry Ruggs and Bryan Edwards for this one, which should only mean more targets for Waller. And his price is down to its lowest mark of the season.

To be perfectly honest, I’m getting sick of chasing Thomas’ usage when the fantasy production hasn’t followed.

I’ll give him 1 more shot, though, with his price still way down at $3,500. Although Thomas has scored just 6.6 and 7.1 DK points the past 2 weeks, he hasn’t really hurt us because his price tag allows us to do so much at the other positions.

There aren’t any attractive cheap DSTs this week. The Texans ($2,500) look like your best bet down there. They’re 3.5-point home favorites against a Vikings squad that ranks 25th in adjusted sack rate allowed. QB Kirk Cousins has (uncharacteristically) tossed 6 INTs already.

But if you can find the salary, play the Bucs. This unit has been great in both real life and fantasy so far. Tampa sits 2nd in Football Outsiders’ defensive DVOA and 3rd among main-slate DSTs in DK points.

The Bucs are 7-point home favorites this weekend vs. the Chargers and rookie QB Justin Herbert.