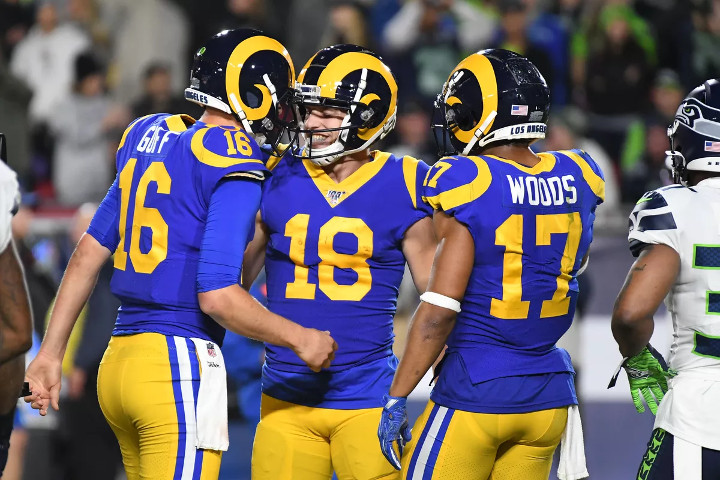 This should be a low-owned stack with Goff not popping in projection systems this week despite a soft matchup against the Cardinals.

I like Goff in matchups against bad defenses that can’t generate pressure — and that’s the case this week against the Cardinals without stud DE Chandler Jones.

The Cardinals have given up the 3rd most fantasy points to opposing QBs and the Rams should have no problems moving the ball against the Cardinals weak defensive unit.

Goff actually has 10 turnovers in last 4 starts but did have a spike week just a couple of weeks ago, throwing for 376 yards and 3 TDs against the Bucs.

I will be stacking Jared Goff with Cooper Kupp or Robert Woods, who easily lead the Rams in targets with 96 for Kupp and 87 for Robert Woods.

Kupp had 2 nice games against the Cardinals last season with 7-99-1 and 6-65-1. The Cardinals have been particularly vulnerable in the slot all season, giving up big games to Tyler Lockett, Jamison Crowder and Cole Beasley.

Robert Woods is in play, too, having scored 7 TDs compared to Kupp’s 2 and adding sneaky rushing upside with 115 yards and 2 scores on the ground this season.

I don’t trust Cardinals pass catchers in this game as Jalen Ramsey has locked up DeAndre Hopkins in the past and the Rams have given up the least amount of fantasy production to opposing WRs.

If I were to pick a Cardinals WR, it would probably be Christian Kirk with his ability to catch long passes and mostly avoid Jalen Ramsey.

In Rams stacks, it is certainly viable to play Kenyan Drake from the Cardinals side of the ball. He’s coming off a 25-touch, 2-TD game against the Patriots.

Allen and Ekeler combined for 26 targets last week from Herbert, who attempted 52 passes against the Bills.

Ekeler saw outstanding usage in his first game back from a major hamstring injury, setting a career high with 25 touches, including 11 receptions on 16 targets while playing 72% of the Chargers’ snaps.

The Patriots have a middling rush defense, giving up the 15th most fantasy points to RBs. They have been particularly vulnerable against the pass, ranking 25th in Football Outsiders’ RB coverage DVOA.

Allen has been one of the top 5 WRs in football with 5 games over 20 DraftKings points. He’s actually averaging over 20 DK points for the season.

Herbert has been a machine as well, finishing as a top 15 QB in 9 of 10 starts. Nothing about the Patriots defense is scary anymore as only 9 other teams have allowed more fantasy points to opposing QBs.

Herbert has easy top 5 upside at the QB position this week against the Patriots and can easily be stacked with Ekeler and/or Allen, who combined for 50% of the Chargers targets last week.

Meyers would be my preferred run-back option from the Patriots as he has seen the most consistent volume at the WR position on New England.

Meyers has 5+ catches in 4 of his past 5 games and has had multiple games with over 35% of the team target market share.

Meyers is somewhat risky due to the inconsistency of Cam Newton’s throwing arm but does have 2 games this season with 10+ targets, including a 30-point DK performance in Week 9 against the Jets.

Montgomery sits atop the DraftSharks model in points per dollar with excellent price tags on both sites in the best possible matchup against the Lions, who have given up the most fantasy points to the RB position.

Montgomery played 85% of the snaps and is the clear workhorse back with Tarik Cohen done for the year.

I like the idea of using Montgomery and the Bears defense together in hopes of a Bears blowout as Matthew Stafford has performed poorly the past several weeks dealing with a thumb injury and the loss of stud WR Kenny Golladay.

The Lions have surrendered a lot of fantasy points to opposing defenses as only 8 other teams have given up more and the Bears should be able to get after Matthew Stafford early and often.

The Bears have had 4 games this season with 3+ sacks and 4 games with 10+ fantasy points — and they’re relatively cheap on both sites.

I will be using Montgomery/Bears lineups hoping they combine for multiple scores. The Bears also have a great special teams unit with elite kick returner Cordarelle Patterson always live to run one back for 6.

Finally the Browns played in a game with no weather concern and Mayfield was able to put up a respectable performance with 258 yards and 2 TDs.

Mayfield hadn’t thrown a TD pass for 3 consecutive weeks after a 5-TD performance against the Bengals 4 weeks ago.

The matchup for Mayfield is excellent in Week 13 against the Titans, who have allowed top 12 QBs in 7 of their past 10 games. Only 4 other teams have given up more fantasy points to opposing QBs than the Titans.

Landry finally popped up for a big game last week with 8-143-1 against the Jaguars and should continue positive momentum against a Titans secondary that has allowed the 7th most fantasy points to WRs.

Landry should dominate target market share with Odell Beckham done for the year. Even though the Browns want to run the ball early and often, they may need to pass more this week as 6-point underdogs on the road.

Henry was the 2nd highest scoring player on the slate in Week 12 only behind Tyreek Hill, who went off for 269 yards and 3 TDs.

Henry had over 100+ yards and 3 TDs at the half against the Colts and that was with the Titans as underdogs. Now Henry and the Titans are 6-point home favorites against an inferior Browns team that he should be able to run all over.