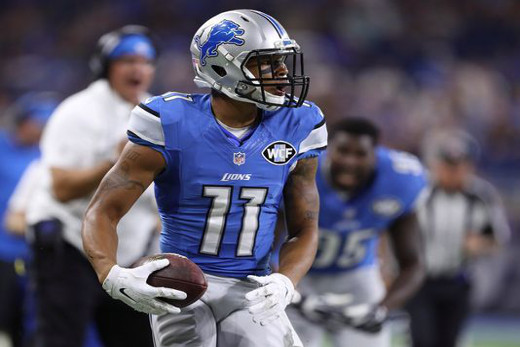 Brady has just 2 TDs since Week 13 — his 1st meeting with Buffalo. That should only help lower his tournament ownership.

Brady’s outlook would improve if Chris Hogan’s back in the lineup. Just getting back home is favorable, as he’s tossed his 2 highest TD totals in Foxborough. The Pats have surprisingly been on the road for 3 straight and for 5 of their past 6 games.

He simply hasn’t supplemented those TDs with high yardage totals. But that could change this week against a Tennessee defense that’s much tougher vs. the run than it is vs. the pass. Football Outsiders’ pass D rankings place the Titans 24th league-wide.

Bortles has dipped below 16 FD points just once over his past 8 showings. And only Ben Roethlisberger, Russell Wilson and Case Keenum own more fantasy points than Bortles over the past 5 weeks.

The 49ers have faced the 2nd fewest pass attempts over that stretch, yet they’ve surrendered the 14th most QB fantasy points.

Lewis is unlikely to become a workhorse back — even with Rex Burkhead out of the lineup. Still, Lewis should see a boost in red zone opportunities. The former Bengal has handled 16 RZ rushes this year, including 9 from inside the 10 yard-line.

For the year, Lewis is sitting on a healthy 5.2 YPC average.

Freeman’s price didn’t budge from last week, as he played on Monday night. But after another busy, productive outing (27 touches and 194 total yards), this Falcon is simply too cheap — even with Tevin Coleman set to return from a concussion.

Thomas has garnered at least 8 targets in all but 1 game this season. He’s caught fire of late with TDs in 3 straight, a span that’s produced an average of 8 catches and 93.3 yards.

Among main slate WRs, Evans sits #1 in our $/point rankings. Not only is he discounted, but the Bucs’ #1 WR also gets a Panthers defense that’s allowed the most fantasy points to WRs over the past 5 weeks.

Plus, DeSean Jackson enters the weekend highly questionable with an ankle injury.

Jones hasn’t found the end zone in 3 straight, but he’s reached 64 yards in each of his past 5. And he’s clearly Detroit’s top scoring threat, drawing 18 end zone targets on the year (per ESPN).

He’ll carry extra motivation this week going against his old squad. More importantly, though, the Bengals have struggled to stay healthy in the secondary.

With Kelvin Benjamin battling a knee injury, the Bills are looking thin at pass catcher. Insert Clay, who tied a season high with 9 targets last week vs. Miami.

Sure, the Pats have defended TEs well this year, allowing just 5 scores to the position and none since Week 6. But that simply looks schedule-driven.

Engram carries a favorable target projection this week, simply because he’ll avoid Patrick Peterson’s coverage. Engram’s likely to see fellow rookie Budda Baker on the majority of his routes — per Pro Football Focus — although he’ll surely see some of the surging Tyrann Mathieu, too.

Combine the matchup with Engram’s top-end athleticism, and it’s easy to see his tournament appeal.