Every Monday morning, I tweet out IDP notes for each team as I go through all of the week’s NFL Gamebooks -- primarily focused on playing time. Starting this week, I’m compiling those notes and posting them in article form right here ...

LB Kenny Young played 1 fewer snap Thursday night against the Seahawks than in the Week 2 game that saw him get ejected for contact with an official. Troy Reeder led the group at 78% playing time, 14 percentage points ahead of his previous high this season.

DE Carlos Dunlap doubled his season tackle total with 3 vs. Rams, including a season-high 2 solos. He also added a pass deflection. But he played a season-low 20 snaps (30%) and posted 0 pressures. He appears done as an IDP option.

Rookie CB Brandin Echols pushed back ahead of fellow rookie CB Michael Carter in playing time vs. the Falcons and led the team with 9 tackles (7 solo). It's gone:

Bryce Hall has been the Jets' constant at the position, playing at least 94% of snaps in each game so far.

With Erik Harris out vs. Jets, S Jaylinn Hawkins played every snap for the Falcons. He grabbed an INT but added just 1 tackle (among only 41 for the entire team).

Even with Jaylon Smith not yet in the mix, LB Krys Barnes played just 34% vs. Cincinnati, Oren Burks 27%. CB Kevin King left with a shoulder injury. Eric Stokes and Chandon Sullivan led the group in playing time in the 1st game post-Jaire Alexander injury.

DE Trey Hendrickson remains the same boom/bust fantasy producer he was with New Orleans. He tallied 2 sacks vs. Green Bay to get to 4.5 on the year. It was his 3rd game among the past 4 with 2+ QB hits. Just 10 total tackles through 5 games, though.

LB Zach Cunningham returned from the COVID list to play only 52% of snaps in Sunday's loss to Pats. Kamu Grugier-Hill and Christian Kirksey each played 100%.

What's wrong with Cunningham? His play.

Here are his Pro Football Focus grades by week this season, with Week 1 at the top ... 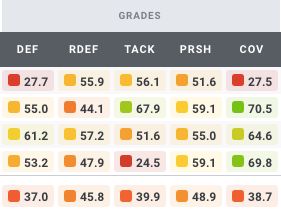 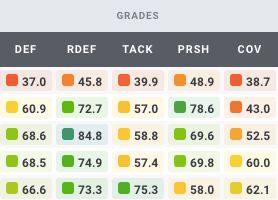 As you can see, his coverage grade has steadily declined throughout his career. That area looks like the primary driver for his decline in overall grade the past 2 seasons. Being a liability in that area is an easy way to get yourself taken off the field.

Cunningham (pictured at the top of this article trying to get acquainted with a football) saw a playing-time dip in the middle of last year that rebounded after just a few weeks. We'll see if there's a bounce back coming this time. But keep in mind that this is a whole new Texans coaching staff vs. previous years -- including a DC, Lovie Smith, whose scheme has long relied on LBs being able to cover.

“His role has been for us, first and second down is where he’s most comfortable. When we get into the nickel-type situations, we feel like the people that we bring in in those particular situations fit us better in pass defense. But he’s been doing well since he came back from the one game he didn’t play. He’s playing well. We need to be playing better. He’s a heck of a player, and expect more out of him as well as the other guys that are playing around him.”

We'll have to head into Week 6 skeptical of Cunningham's playing time, though.

CB Jonathan Jones played a season-high 73% of snaps vs. Texans, with Jalen Mills out. LB Ja'Whaun Bentley returned for 63% playing time, down vs. 72% and 93% in 2 previous healthy games. EDGE Matt Judon is on a tear, with 6.5 sacks and 10 QB hits over his past 4 games.

He collected 4, 2 and 6 tackles, with no plays on the ball in coverage.

Alexander Johnson played every snap and tallied 8 tackles for the 2nd straight game.

LB Damien Wilson topped 80% playing time for the 3rd straight game vs. the Titans. Myles Jack ceding the green dot and then hurting his back certainly can't hurt Wilson's status for Week 6 and beyond.

CB James Pierre defensed 2 passes (1 INT) and led the team with 6 solo tackles while filling in for Cameron Sutton vs. Broncos. We'll see about Sutton's status for Week 6.

This group has been all over the place through 5 weeks. Tough to rely on any of them.

CB Jamel Dean returned to play every snap vs. Dolphins. Other CBs:

Safeties Will Harris and Tracy Walker each saw much more playing time today vs. the past 2 weeks.

LB Anthony Barr returned for 100% playing time vs. the Lions in his 1st action of the regular season. He banished Nick Vigil to just 37% snap share.

Rookie LB Pete Werner played 82 of 83 snaps vs. Washington and delivered a game-high 13 tackles (8 solo). Kwon Alexander is expected back after the Week 6 bye, though.

John Sigler of Saints Wire says Werner "has played well in his absence but there’s no substituting the athleticism and playmaking ability Alexander brings to the table. And, of course, his experience and leadership."

Landon Collins has played every snap in 2 straight games, but they were positive matchups. Atlanta and New Orleans each rank near the bottom of the league in frequency of throwing deep. So if Collins' lagging playing time early this season indicated team wariness over his ability in coverage, then we might see a rebound in the wrong direction. The next 2 games find the Chiefs and Packers on the other side -- with passing games a bit more challenging than those of the Falcons and Saints.

It can't help Collins' outlook that he earned his worst PFF coverage grade of the season so far against New Orleans. PFF has charged him with allowing 4 catches each of the past 2 games, for 148 combined yards and 2 TDs -- as well as allowing perfect QB ratings in each of those contests.

Collins played just 58% of snaps against the Bills in Week 3, before the Atlanta and New Orleans matchups.

Rookie LB Jeremiah Owusu-Koramoah played a season-high 91% of snaps vs. Chargers, despite Anthony Walker returning from IR (73%). His previous snap shares: 38%, 30%, 51%, 52%. He also suffered a throat contusion. Fortunately, JOK was checked out in a local hospital after the game and cleared to return to Cleveland on Monday.

LB Denzel Perryman has now delivered 10+ tackles in FIVE straight games, despite trailing Cory Littleton in playing time for the 2nd straight week. I still can't shake the feeling that Perryman will come crashing down at some point, but the Raiders have given us no reason to believe he'll disappear from the lineup soon.

S Tashaun Gipson returned from a 2-game injury for 87% playing time vs. the Raiders. Deon Bush slid back to a reserve role: 22%. LB Danny Trevathan came off IR for 10 snaps, with Alec Ogletree playing a season-low 52%.

LB Zaven Collins played a season-high 52% of snaps vs. the 49ers, without cutting into playing time for Jordan Hicks (100%) or Isaiah Simmons (95%). Simmons spent a little more time on the edge than usual.

J.J. Watt will need to convert some sacks at some point to help us, but it's worth noting that he has delivered 5 QB hits over the past 2 weeks.

S Jayron Kearse was the only #Cowboys defender to play every snap vs. Giants, and also the only Dallas starting safety to not be punched in the helmet by Kadarius Toney.

LB A.J. Klein played just 63% of snaps despite Matt Milano being out vs. the Chiefs. No other LB (beyond Tremaine Edmunds) factored in. Extra playing time went to CB Siran Neal as team's new leading holder.

If you selected LB Darius Leonard among the first few IDPs in your draft, then you might have been wondering what's been going on through a slow-ish start (by his standards).

Leonard missed the Friday practice of Week 1 with an ankle injury that didn't show up on Wednesday's or Thursday's injury reports that week. He carried no injury status into that game, but it's tough to imagine the ankle was not an issue.

That marked the 1st time this season we got practice participation from Leonard on both Thursday and Friday. He then followed the same practice schedule leading up to Monday night's game at Baltimore.

Is it a coincidence that we got Leonard's 2 largest tackle shares of the season so far in the past 2 games? Maybe ... maybe not.

If you checked the Monday-night box score and wondered who the heck that was leading Baltimore in tackles, it was 3rd-round rookie S Brandon Stephens.

Making his 2nd straight start in place of DeShon Elliott, Stephens racked up 12 tackles (6 solo) against the Colts, 17.9% of the team's total for the OT win. He played every defensive snap after staying on the field for just 74% and collecting 3 tackles (1 solo) the week before at Denver.

Elliott has now missed 2 games with a quad injury. He put in 2 limited practices last week, though, and hit Monday questionable. So the veteran seems like a solid bet to return for Week 6.