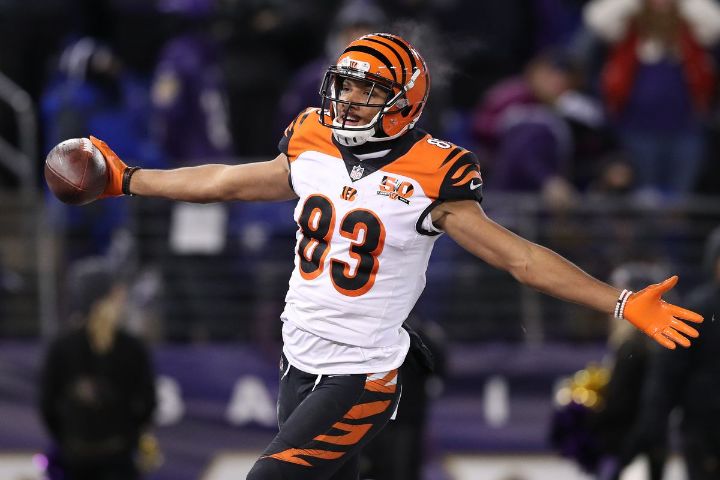 Jared showed you yesterday how many more RBs we’re all taking in the early rounds.

Well, you’ll be shocked to learn that those extra early-RB picks are coming at the expense of the wideouts.

As you can see in the table, the number of receivers going in the 1st few rounds of fantasy football drafts has slid downward over the past 4 years -- continuing this season. Rounds 1-3 are the biggest culprits, and then the numbers start to even out.

Part of the change has likely been more best-ball drafting, which has tended to favor pursuing RBs early and then filling in WR. But the shift has carried beyond best-ball drafts and into lineup-setting leagues as well.

Why the continued dip for 2020? Well, last year’s WR finishes went kinda all over the place.

The blue line through the chart above shows positional ADP for every WR drafted inside the top 200 overall. Red represents each player’s finish at the position in total PPR points. Yellow shows the player’s finish in targets per game.

Take a look at just the top 23 WRs in ADP from last season, and you see wide variation in the return on that draft cost.

I’ll be honest. I’ve wondered plenty whether running away from early RBs is the way to go in the current environment. And that kind of approach might not be a bad idea if you’re trying to win a large-field tournament rather than a common-sized fantasy league.

But especially after running the MVP Board through our 12-team Perfect Draft articles, I won’t generally be exiting the first 3 rounds without at least 1 RB on my roster. (Check out the Perfect Draft that fits your league size and format.) Your Board isn’t likely to favor that approach either.

Part of that is the greater projection gaps at RB. Part of that is a few WRs going earlier than they should in ADP. And part, of course, is the wideout value making it further into your draft because of the RB-heavy start.

Let’s look at how to take advantage …

The best thing about the current WR slide in fantasy drafts is that it gives you options. Are you sitting at 1.11 and deciding between Davante Adams and an RB not currently practicing? Feel free to start with a wideout and then grab a RB around the turn.

Open with a top-5 back and find Chris Godwin staring at you late in Round 2? Go ahead. Round 3 is full of RBs to consider.

Or maybe you’d like to secure a pair of RBs to open your draft and avoid the Round 3 muddle at that position. Allen Robinson, Adam Thielen, Mike Evans and a couple of WRs we project just ahead of them stand as fine potential options.

One thing to keep in mind as you’re making decisions in this range: targets matter … a lot.

When I looked at that erratic 2019 group of wideouts, the correlation between ADP and their final PPR rank was just 0.44.

So even when being drafted earlier didn’t make the WR much more likely to score big, those players did tend to draw more targets. And more targets still meant more scoring.

That’s why we’re wary of a WR such as Kenny Golladay going so early. He’s a worse bet for target share than other top-level wideouts going in his range. Even DeAndre Hopkins presents risk in that category with his move to a new team.

Robert Woods and the Mid-Rounders

Here’s your cheat code for WR in 2020. No matter how many times we bring him up on the podcast, Woods’ ADP simply refuses to climb. In BestBall10s drafting since Aug. 15, he’s still going just 18th among WRs. That’s also where he’s going in FFPC drafting, for lineup-setting leagues.

That has meant you can draft Woods into the middle of Round 4.

He led the Rams in targets last season and finished 14th among PPR wideouts -- despite scoring only 3 total TDs. We have Woods projected 7th among WRs in PPR.

Whether he’s your 1st or 2nd at the position, just draft him.

And Woods merely serves as our poster boy for a range rich in value.

Beyond him and Amari Cooper (8th in our rankings, also Round 4 in ADP), Courtland Sutton, Tyler Lockett, Terry McLaurin, DeVante Parker, Keenan Allen and Tyler Boyd stand out as strong, sturdy options in the range of rounds 4 to 6 (and perhaps even Round 7).

All of those guys could lead their teams in targets. Keep that factor in mind as you’re shopping in these rounds. You could comfortably start your draft with no WRs through 3 rounds and still fill out your starting spots by the end of Round 6 (whether you start 2 or 3).

Upside in the Middle Rounds

There are 2 kinds of upside that you can hunt for just beyond Round 6.

Boyd and his late Round 7 ADP makes him a good segue to the target-upside crew in this range. Boyd isn’t going to wow you with his game tape and isn’t likely to pile up 2-TD outings. But the continued health issues for A.J. Green leave Boyd looking likely to lead this Bengals offense in targets. And the team clearly believes QB Joe Burrow to be an upgrade over Andy Dalton.

Similar bets for target volume in this range include Julian Edelman and Jamison Crowder. The Jet, in particular, carries a late-Round 9 ADP. Crowder’s team ranked just 22nd in the league at 521 pass attempts last season. If the Jets match that number and Crowder draws 25% of the targets, we’re talking about a 130-target season. Only 12 wideouts reached 130 targets last year.

This type of player can fit nicely if you drafted more volatile WRs earlier.

Marquise Brown, Will Fuller and Marvin Jones, on the other hand, don’t look like strong bets for 130 targets. But each has already displayed his big-game potential. Any of those 3 would make for a high-upside 3rd or 4th WR -- especially palatable if you opened with steadier target collectors.

The Giants, Raiders and Eagles head toward the season with no clear target hierarchy at wideout. That could be frustrating for setting your weekly fantasy lineup. But it also means no WR from any of those teams is commonly going before Round 10.

And once you get beyond Round 10, you should be fishing for upside more than following the rankings. Use the “ceiling” projections on your MVP Board to mine for upside in the later rounds. And check out our Sleepers topic under the Analysis tab for more players to target.