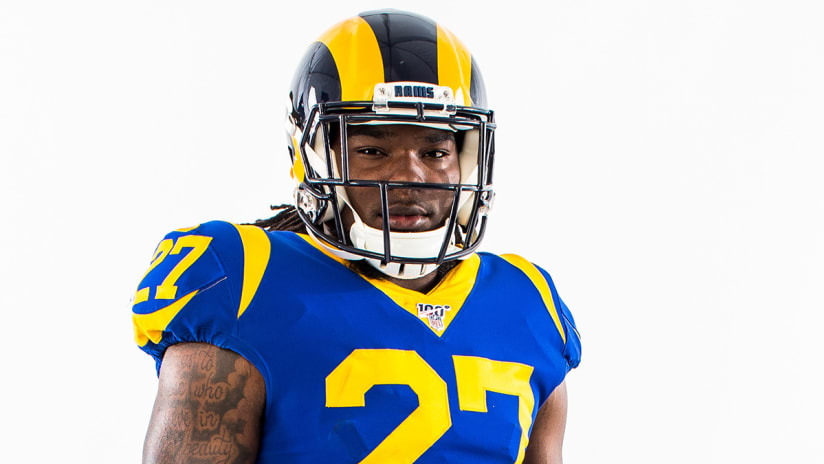 Henderson has finished as a top-20 fantasy RB in all 5 of his games this season. Now he gets the Lions' league-worst RB defense.

Week 6
Henderson scored twice — one on the ground and one through the air — in the Week 6 blowout win over the Giants. He totaled 107 scrimmage yards on 23 touches (21 carries). His TD catch was notable as he beat the secondary on the outside and QB Matthew Stafford threw a dime from 25 yards out for his first receiving TD this year.
Henderson was the clear workhorse from the backfield as he out-touched RB Sony Michel 23-9, and even more so as Michel saw most of his action with the game in hand in the 2nd half. Henderson now has 6 TDs on the season as he has paid off fantasy owners with consistent production. He should continue rolling this week with a juicy matchup at home against the Lions.
Week 5
Henderson has looked the part of a borderline RB1 this season. In the 4 games Henderson has played, he hasn’t finished lower than RB18 on the week. Week 5 was no different as Henderson cruised to 17-82-1 rushing line, finishing as the RB16. Sony Michel did see extensive work, getting 11 carries of his own, but a lot of that production came when Henderson got banged up in the first half.
Henderson’s injury history is alarming, which makes grabbing Michel a major priority for Henderson owners. Michel did take over as the workhorse back when Henderson went down earlier this season.
In Week 6 Henderson is a must start for fantasy owners as they take on the reeling Giants D that has allowed the 4th most rushing yards to RBs this season.
Week 4
Despite playing through a rib injury, Henderson got workhorse usage in the Week 4 loss to the Cardinals. We’ll never know if that was the plan prior to RB Sony Michel’s 2nd-quarter fumble. But Michel didn’t record a touch after that gaffe.

And this Rams running game was gashing the Cardinals. Henderson tallied 89 yards on his 14 totes -- a big 6.4 yards per carry. The only reason he didn’t have a bigger day is that the Rams fell way behind and were forced to abandon the run.

We’ll see if Michel works his way back into the mix, but Henderson sure looks like a workhorse back. He’s racked up 30 carries and 7 targets in his 2 full games this season.

He gets fine matchups vs. the Seahawks and Giants the next 2 weeks. Then comes a dreamy stretch: vs. Detroit, at Houston, vs. Tennessee.
Week 2
Henderson operated as the Rams’ workhorse for the 2nd straight game before exiting early in the 4th quarter with a rib injury. He garnered all 13 RB carries and all 5 RB targets over that time.

And Henderson looked good. He seems more comfortable in the scheme this season and is running with good burst and power. He took those 13 carries vs. the Colts for 53 yards and a score. Henderson added 29 yards on 3 receptions.

Now we’ll see about the injury, which is reportedly to Henderson’s rib cartilage. HC Sean McVay didn’t rule Henderson out for Week 3 when asked on Monday. These rib injuries tend to be pain management issues, so this might come down to a game-time decision. Stay tuned to Shark Bites for updates.

Of course, a Week 3 matchup vs. a dominant Bucs run defense would make Henderson a shaky fantasy play even at 100%. But that’s followed by a nice stretch of opponents: Cardinals, Seahawks, Giants, Lions, Texans and Titans.
Week 1
Any doubts about Henderson’s role in this offense following a trade for Sony Michel should be put to bed, for now. Henderson out-touched Michel 17 to 1 in a game in which the Rams led from start to finish. Henderson was his typical self, running hard and hitting holes in a hurry. He played 49 of 52 total snaps and looked like he had juice all game. Henderson even caught 1 pass for 17 yards. Henderson finished with 16 carries for 70 yards and a TD on a 1-yard plunge late in the third quarter.
We have Henderson at RB16 this week against the Colts’ strong front 7. However, the usually tough Colts front just gave up 140 rushing yards to the Seahawks in Week 1. With Stafford at QB now causing defenses to respect the pass, Henderson could be in for a big season this year if McVay continues to let him have the majority of the touches. If Henderson continues to see 94% of the snaps, it could be a career year in this offense. We have Henderson ranked at RB20 the rest of the way.

Henderson finished last season on the sidelines with an ankle injury, while Cam Akers played a workhorse role. Akers looks like the favorite to lead the backfield in 2021 -- but don’t consider him locked into that job. He saw extensive work in only 6 games as a rookie last year and actually got beat by Henderson in most advanced rushing metrics.

Henderson has a chance at seeing enough work to be a fringe fantasy play this season. And, at worst, he’s a high-end handcuff.

Rams RB Darrell Henderson (ribs) is active for today’s game vs. the Cardinals. He practiced all week, including a full workout on Friday. We’ll see if Henderson returns to the feature-back role he was playing before the injury. If he does, he’ll have RB1 upside today. Even if he cedes some work to RB Sony Michel, Henderson should still be a nice fantasy play vs. Arizona’s leaky run defense.

NFL Network's Ian Rapoport confirms that Rams RB Darrell Henderson (ribs) will play vs. the Cardinals today. He practiced all week, including a full workout on Friday. There's some risk that Henderson's workload is scaled back coming off this injury, but we like him as an upside RB2 in today's plus matchup.

Rams RB Darrell Henderson (ribs) is listed as questionable for this weekend's game vs. the Cardinals. He put in a full practice on Friday, though, and HC Sean McVay confirmed that Henderson will play on Sunday. He was getting feature-back usage before that rib injury, but we wouldn't be surprised if Los Angeles scaled back Henderson's workload a bit going forward. Still, he's a nice Week 4 fantasy play in a likely shootout vs. a leaky Arizona run defense.

Rams RB Darrell Henderson (ribs) was listed as a limited participant in Wednesday's practice. "He had a good look in his eye and took part in the walk thru just now," HC Sean McVay said. "So I think the expectation and anticipation is that he’ll play, but not 100% sure." Henderson was getting feature-back usage before the rib injury, but we wonder if Los Angeles will lighten his load a bit going forward. Check back tomorrow for another update on Henderson's status.

Rams HC Sean McVay said Monday that RB Darrell Henderson (ribs) is making good progress and that he's "hopeful" Henderson will be back for this weekend's game vs. the Cardinals. Sony Michel got feature-back usage with Henderson out Week 3, racking up 20 carries and 4 targets. Michel will be a top 20 fantasy play in Week 4 if Henderson remains sidelined.