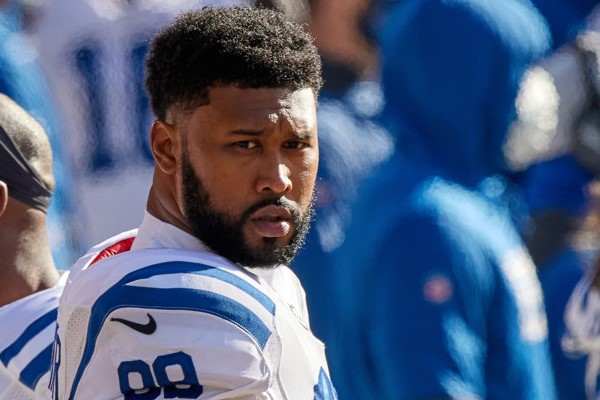 Changing teams couldn't stop Buckner from landing among the top 8 fantasy linemen for the 3rd straight season last year. And it might have even helped.

Buckner's 9.5 sacks fell right in line with the previous 2 seasons. His 26 QB hits marked a career high, though, and a jump of 12 vs. his 2019 total. And that came despite Buckner missing a game.

He lost line mate Denico Autry to Tennessee in free agency, but the team is reportedly high on Tyquan Lewis stepping into the role Autry leaves behind.

More importantly, Buckner is just 1 of the league's best DTs -- and likely 1 of the top D-linemen in general. Keep betting on him.

If you play in a DT-required league, Buckner puts up a strong case to be the 1st lineman drafted. There are only 2 DTs within 16 fantasy points of our baseline projection for Buckner. The first of those -- Chris Jones -- is expected to play a lot more at DE this year, which adds a challenge to his outlook.

Colts DT DeForest Buckner is active for today's game against the Jaguars. He arrived questionable and is likely well short of 100% after missing the entire week of practice with a nagging knee injury. He'll be risky but also carry upside as an IDP option.

Colts DT DeForest Buckner is questionable for Sunday's game against the Jaguars. Buckner missed practice all week with a nagging knee issue and seems like a legitimate game-day decision.

Colts DT DeForest Buckner is active for today's game against the Texans. He was questionable, primarily for a knee injury, but finished the week with a full practice. Buckner belongs in IDP lineups in most cases. Questionable S Andrew Sendejo (calf) is also active.

Colts DT DeForest Buckner is questionable for Sunday's game against the Texans. He's dealing with knee and foot issues, though the knee seemed more significant to begin the week. He close out the week with full Friday participation after a return to limited action Thursday, though. Buckner seems on track to play and should be in IDP lineups if active (barring some announcement of a limited role). S Andrew Sendejo (calf) is also questionable after following the same practice progression as Buckner through the week.

Colts DT DeForest Buckner came away from Sunday's loss to the Buccaneers with a knee injury that has his status iffy for Week 13. “I don’t know if we’re going to see him at the beginning of the week,” HC Frank Reich said Monday, according to the Indianapolis Star, referring to the start of the practice week. “We’ll hopefully see him at the end of the week, but we’re going to have to take it day by day. There’s no guarantee on him.” Losing Buckner would be a significant absence for the Colts D and IDP lineups, but a matchup with Houston would soften the blow for Indy.