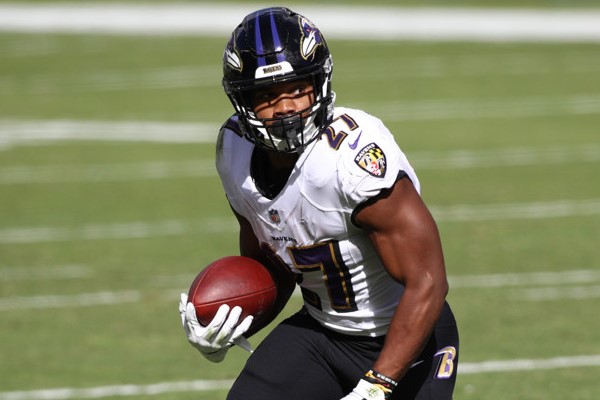 -Baltimore spent a Round 2 pick (55th overall) on Dobbins last year. It marked their most significant use of RB draft capital since selecting Ray Rice 55th overall in 2008.

-Dobbins was slowly eased into the offense; he didn’t exceed 12 touches until Week 8.

-A banged up and ineffective Mark Ingram (11 games played) helped open up touches for the rookie. Ingram signed with Houston this offseason.

-Dobbins only missed 1 game all year — and it was a stint on the COVID-19 list.

-Dobbins and Gus Edwards both averaged ~9 carries per game. The pair each tallied 25 red zone carries.

-Dobbins’ workload picked up down the stretch. He saw double digit touches in 11 of the final 12 games, including the postseason. He maxed out at 17 touches.

-Dobbins notched an eye-popping 6.0 YPC and certainly passed the eye test. That mark led all RBs with 30+ attempts.

-The issue was in the passing game. Even with zero depth at WR, Dobbins saw only 24 targets (6.1%) for the run-heavy Ravens. Gus Edwards, Mark Ingram and Justice Hill combined for 26 targets.

-With OC Greg Roman returning for year 3, Baltimore will remain committed to the ground game. Yet offseason investments in Sammy Watkins and rookies Rashod Bateman and Tylan Wallace show a willingness to open up the passing game. Roman has indicated he’ll go in that direction with recent offseason comments.

-Baltimore re-signed Edwards to a 1-year deal over the spring. After an impressive 2020, Edwards’ presence could limit Dobbins to a ~60/40 split. Jackson will remain a frustrating threat to steal high-value touches, too.

Just evaluating Dobbins the player, there’s not much to dislike. As a rookie, he combined plus power and elusiveness to produce a Nick Chubb-like debut. Really impressive stuff.

While the threat of Lamar Jackson’s legs helped open up space, the same setup remains in place for year 2. The downside is that Gus Edwards figures to continue keeping Dobbins out of a workhorse role. And that’ll continue to put an emphasis on high efficiency.

Unless his receiving usage changes drastically, Dobbins figures to be a volatile asset from week to week. He’s not cheap in summer drafts, either, with an ADP in late Round 2.

Dobbins a "viable weapon in the passing game."

Ravens OC Greg Roman believes RB J.K. Dobbins can be a "viable weapon in the passing game ... That's something we're working on diligently every day -- a threat out of the backfield." We don't doubt that Dobbins can be an asset as a pass-catcher. He tallied 71 receptions over 3 seasons at Ohio State. The question is whether the Ravens will actually get him more action in that department. Dobbins saw just 24 targets last year -- and Ravens RBs combined for just 50. That number checked in at 51 back in 2019, QB Lamar Jackson's first full season as starter. For perspective, 17 RBs topped 51 targets by themselves last year. So file this under "believe it when we see it." If Dobbins truly did take on a significant passing-game role this season, though, he'd be a strong bet for a RB1 finish.

Ravens RB J.K. Dobbins isn't listed on the Week 17 injury report. He left last week's game with a rib injury but is evidently good to go for Sunday's finale vs. the Bengals. The rookie has been Baltimore's lead back over his last 5 games, averaging 12.8 carries -- but just .8 targets.

Ravens RB J.K. Dobbins suffered a rib injury in the 2nd half of Sunday's game vs. the Giants. We'll look for an update on the severity. The rookie's absence left Gus Edwards as Baltimore's top back.

Ravens RBs J.K. Dobbins has been activated from the COVID list and will return for Tuesday night’s game against the Cowboys. When we last saw the rookie back in Week 11, he carried 15 times for 70 yards and a score while playing 63% of Baltimore’s offensive snaps. A similar role would make him an upside RB2 in a plus matchup vs. Dallas.

Dobbins & Ingram out vs. Steelers

Ravens RBs J.K. Dobbins and Mark Ingram were not activated from the COVID list for today's game vs. the Steelers. We'll see if they're able to return for Tuesday night's game vs. the Cowboys. It'll be Gus Edwards, Justice Hill and practice-squad call-up Ty'Son Williams in the Ravens' backfield vs. Pittsburgh's 5th-ranked RB defense.