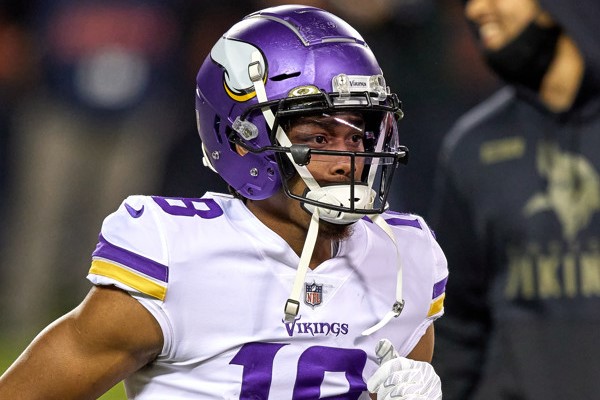 Only 23, it’s wild to think that we might not have seen Jefferson’s best season just yet.

What we have seen is a nice jump in production from year 1 to year 2. He’s poised to dominate targets again with a QB he’s already established with. And now, he’ll play under what’s almost certainly an upgraded coaching staff.

The LSU product shouldn’t last beyond the middle of Round 1 in 12-team PPR setups.

Vikings WR Justin Jefferson said he's "so excited" about new HC Kevin O'Connell's offense. "Our offensive style, it's not a run-first offense anymore," Jefferson said. "Just us being able to put different people in different positions and distribute the ball, really." We actually wouldn't describe last year's Vikings as "run first" considering they ranked 11th in pass attempts. But they finished 18th in situation-neutral pass rate, so there's room for at least a moderate climb in passing volume this season. Jefferson is a locked-in top 3 fantasy WR.

Former Rams OC and new Vikings HC Kevin O'Connell wants to use WR Justin Jefferson in a role similar to the one Cooper Kupp played last year. “The one thing about Cooper Kupp this past season is he lined up in a lot of different spots. It was hard for defenses to really know where he was," O'Connell said. "I see that with Justin. I see an incredible, incredible skillset, but I also see a player we can move around. We can make it hard for defenses to know where he’s going to be. He doesn’t have to line up in the same spot all the time. He doesn’t have to run the same type of routes all the time. He’s dynamic with the ball in his hands. He’s willing in the run game. This guy’s a special, special player." It's no surprise that O'Connell will make Jefferson the focal point of his passing game. But it's exciting to hear about a more diverse role -- especially considering the season Kupp just had.

Vikings to hire O'Connell as HC

The Vikings are expected to name Rams OC Kevin O'Connell their new HC, according to multiple reports. The move can't be made official until after the Super Bowl. The 36-year-old O'Connell was a 3rd-round pick of the Patriots back in 2008. He washed out of the league after just 5 seasons and took his first coaching job with the Browns in 2015 under OC John DeFilippo. O'Connell worked for HC Chip Kelly in San Francisco in 2016 before spending the next 3 seasons in Washington, earning the OC title in 2019. He's spent the past 2 seasons as Rams OC, although HC Sean McVay has called the plays.

The Vikings have fired HC Mike Zimmer and GM Rick Spielman, NFL Network reports. It ends an 8-year run for Zimmer and a 16-year run for Spielman in Minnesota. Zimmer's tenure brought just 3 seasons of double-digit wins and 2 playoff victories. We'll see who the Vikings hire to run the show going forward.

Vikings QB Kirk Cousins has been activated from the COVID list. He's expected to start Sunday's finale vs. the Bears, despite Minnesota having nothing to play for. Cousins isn't an exciting fantasy option, but his return is excellent news for WR Justin Jefferson and the rest of the Vikings' skill-position players.

Former college teammate Ja'Marr Chase edged the near-record rookie production we saw from Jefferson the year before. But the Vikings' new lead wideout spent 2021 showing his debut was no fluke. Jefferson became the 1st player in NFL history to amass 3,000 receiving yards over his 1st 2 seasons. No one else has collected more than 2,755.