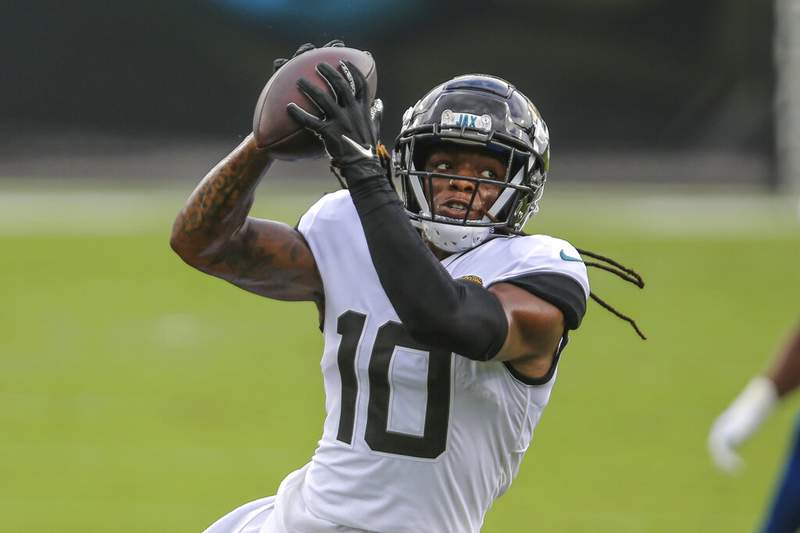 Week 6
Shenault took a step forward in Sunday’s win over Miami … at least in terms of targets. After a 1-catch Week 6, he caught 6 of 10 targets against the Dolphins for 54 yards. The 10 targets matched Marvin Jones for a game-high. Now, it’s worth noting that Miami was down top CBs Xavien Howard and Byron Jones. Trevor Lawrence also fired off 41 passes — his 2nd highest total of the season. With D.J. Chark out for the year, Shenault will continue to get opportunities alongside Marvin Jones. The coaching staff still doesn’t inspire much confidence, but Shenault should remain rostered as a WR4. Week 7 turns up a bye week.
Week 5
Shenault caught 1 of 3 targets for 58 yards in Week 5 against the Titans.
Shenault was quiet even without D.J. Chark in the lineup. QB Trevor Lawrence and the Jags prefer to spread it around, but it was a surprise that Shenault didn’t see any screens or shallow routes as he showed elite elusiveness on his one catch and run.
Shenault is a possible flex option in Week 6 against the Dolphins.
Week 4
Leading the Jaguars with 7 targets in Thursday night’s loss to the Bengals was nice. But the most encouraging sight was Shenault’s 52-yard reception in the 2nd quarter. It was the longest reception of his young career by 16 yards. It was the main reason Week 4 saw Shenault more than double his average target depth vs. any of the season’s 1st 3 games.

We’re not expecting a significant shift in Shenault’s usage, but that catch was 1 of his 2 “deep” targets on the night. That gives him just 3 for the season.

Jacksonville opened the game showing it wanted to get him the ball, with a run for 11 yards on the 1st snap. Shenault led the team with 3 targets by halftime and then gathered 4 more among Trevor Lawrence’s 11 second-half attempts.

Losing D.J. Chark to an ankle fracture in the 1st quarter can only help Shenault’s target counts going forward.

Week 5 brings a terrific matchup with Tennessee.
Week 1
Shenault caught 7 of 9 targets for 50 yards in Week 1 against the Texans.
He looked like the #3 option behind D.J. Chark and Marvin Jones as Jacksonville mostly used Shenault on short routes and screens. He had a long catch of just 14 yards.
Shenault should be considered a WR3 in PPR leagues as the Jags take on the Broncos in Week 2.

Shenault turned in a promising rookie season, posting good-not-great efficiency marks and finishing strong. A 2nd-year leap with a QB upgrade in Trevor Lawrence is a distinct possibility.

The concerns are his injury history and role in new HC Urban Meyer’s offense. We’ll monitor Shenault closely this summer, but he looks like a WR3 target with upside.

Jaguars WR Laviska Shenault (shoulder) put in a full week of practice and isn’t listed on the final injury report. He’s safe to use as you normally would for Sunday’s game vs. the Cardinals.

Jaguars WR Laviska Shenault (shoulder) put in a full practice on Wednesday. Shenault underwent an MRI on Monday that evidently revealed no major issues. He'll be out there for this weekend's game vs. the Cardinals.

Shenault expected back for Week 3

Jaguars WR Laviska Shenault suffered a shoulder injury in Sunday's loss to the Broncos. ESPN's Adam Schefter reports that he'll have an MRI Monday. We'll see about the severity of the issue.

Jaguars coaches are "buzzing" about WR Laviska Shenault, according to insider Hays Carlyon. Shenault has garnered heaps of praise from beat writers for his work in OTAs and minicamp -- and it sounds like Jacksonville's coaching staff has seen the same thing. Shenault turned in a promising rookie season and is getting a big QB upgrade in Trevor Lawrence this year. He's a 2021 breakout candidate.