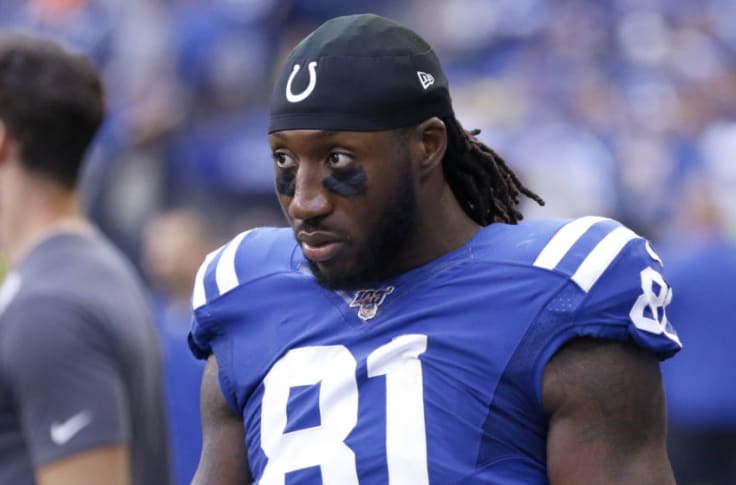 Week 7
Even though Carson Wentz threw just 26 passes in a game that took place in a torrential downpour, Alie-Cox continued his string of impressive performances. Although he was targeted just 3 times, he scored on an 11-yard TD strike to give him his 4th TD over the last 4 games. Otherwise, he played 63% of the snaps, and he and Jack Doyle were often on the field together to help the rushing attack by having extra blockers on the field.

Although he’s been targeted between 3 and 5 times in each of his last 4 games, his role in the offense seems to be secure as a pass catcher in high-leverage situations. Like all TEs, he’ll have the occasional clunker, but due to his efficiency with his targets, he should function as a spot-start option. He also has a very favorable upcoming schedule with 4 of his next 6 opponents being below average against TEs.
Week 6
The Colts currently have a full 3-man rotation at TE. Mo Alie-Cox has clearly emerged as the best pass-game option, but he’s still only a part time player. In Week 6, Jack Doyle (9 routes), Mo Alie-Cox (9) and Kylen Granson (3) all saw some work. These routes for all three TEs were significantly less than Michael Pittman (22). However, injuries to Parris Campbell and T.Y. Hilton might produce more 2-TE sets.

In week 2 with both Hilton and Campbell out, Jack Doyle ran 33 routes vs. 42 for Pittman and had a nice day: 5 catches for 64 yards. Of course, we’ll all be guessing at the target distribution this week.

Alie-Cox posted a career-best 31-394-2 line last year and fared extremely well in efficiency metrics. It was a promising season from a guy who didn’t even play football in college.

Alie-Cox should still be on the rise and has a chance to claim a bigger role in the passing game in 2021 with the departure of TE Trey Burton, who was targeted 47 times last year. 31-year-old Jack Doyle and 4th-round rookie Kylen Granson are Alie-Cox’s competition for snaps and targets in HC Frank Reich’s TE-friendly offense.

The Colts have slapped TE Mo Alie-Cox with a 2nd-round restricted free-agent tender. It's a relatively aggressive move and makes it highly unlikely that Alie-Cox signs elsewhere this offseason. The former college basketball player has taken a while to get going in the NFL but is coming off a career-best 31-394-2 line this past year. He ranked 4th in yards per route run among 43 TEs with 30+ targets. With Trey Burton a free agent, it might be just Alie-Cox and Jack Doyle vying for TE targets in Indianapolis this season.

Colts TE Mo Alie-Cox (knee) is active for tonight's game against the Titans. With TE Jack Doyle out, Alie-Cox should see increased snaps and targets vs. the #31 TE defense -- assuming that knee isn't a major problem.

Colts TE Mo Alie-Cox (knee) is active for today’s game vs. the Ravens. He only got in limited practices on Wednesday and Friday. Alie-Cox shouldn’t be in fantasy lineups at less than 100%.

Colts TE Mo Alie-Cox (knee) is listed as questionable for this weekend’s game vs. the Ravens. He only got in limited practices on Wednesday and Friday. Alie-Cox shouldn’t be in fantasy lineups at less than 100%. His absence would make TE Trey Burton easier to trust.

Colts TE Mo Alie-Cox (knee) is active for today’s game against the Lions. He can’t be trusted in fantasy lineups, but his return adds some risk to Trey Burton and Jack Doyle’s profiles.