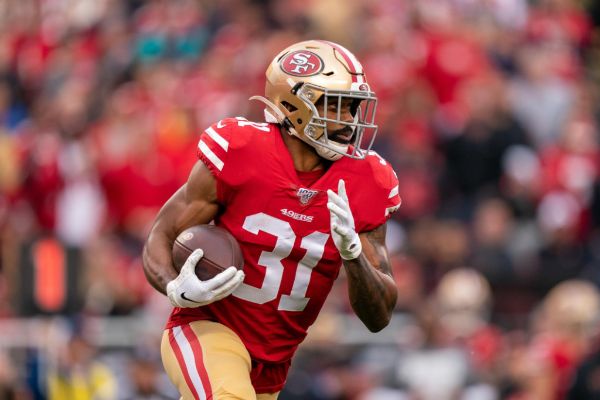 We like his familiarly with HC Mike McDaniel’s system, too.

Durability remains a major risk here, however. And Miami signaled that they won’t count on Mostert by adding both Chase Edmonds and Sony Michel in free agency.

A few big games are certainly possible for the former 49er. But sustained success isn’t likely.

Dolphins RB Raheem Mostert (thumb) didn't practice all week and has been ruled out for Sunday's Wild Card game vs. the Bills. This news swings the door wide open for RB Jeff Wilson Jr. to lead the backfield in this contest. The Bills' defense has been tough all season and ranks 3rd-best in Football Outsiders' run defense DVOA over the last 4 weeks. Even so, Wilson Jr. projects to have enough volume sans Mostert to be an effective fantasy option in playoff formats.

Mostert still not practicing on Thursday

Dolphins RB Raheem Mostert (thumb) missed practice for the 2nd-straight day on Thursday. Teammate RB Jeff Wilson Jr. (illness) upgraded to full practice. There's still one more day of practice left for Mostert to log some participation in advance of Sunday's Wild Card game vs. the Bills. Be sure to keep an eye out for updates tomorrow.

Dolphins RB Jeff Wilson Jr. (illness) was a limited practice participant on Wednesday. Fellow RB Raheem Mostert (thumb) did not practice. The health of the Dolphins' backfield will be of great interest ahead of Sunday's Wild Card contest vs. the Bills, particularly with QB Tua Tagovailoa already ruled out for this game. Check back tomorrow for more information regarding this duo of backs.

Dolphins RB Raheem Mostert suffered a broken thumb in Sunday's win over the Jets. He garnered 11 carries and 2 targets in that one before leaving in the 3rd quarter. The injury doesn't necessarily mean Mostert will miss the Wild Card game against the Bills, but it's tough to imagine him getting significant backfield work with 1 full hand. Mostert's likely absence boosts the upside of Jeff Wilson Jr. for this weekend. We're certainly not betting on Miami getting to Round 2, though.

Dolphins RB Raheem Mostert is questionable to return for Sunday's game vs. the Jets with a thumb injury. We'll update his status when we know more. Mostert's absence leaves Miami's backfield to Jeff Wilson.

Update: Mostert has been ruled out.