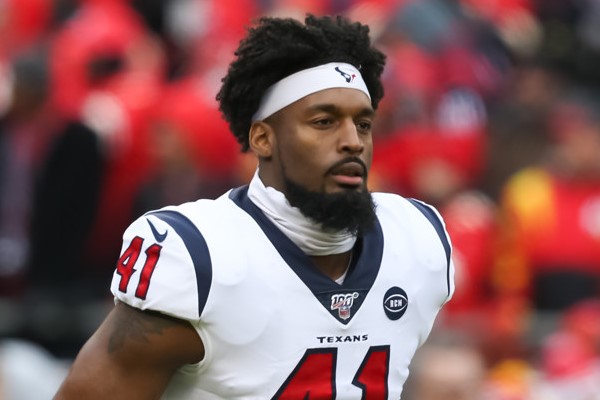 Titans LB Zach Cunningham (knee) is active for today's game against the Raiders.

Dupree out, Cunningham questionable vs. Raiders

The Titans have ruled EDGE Bud Dupree (hip) out for Sunday's game against the Raiders. LB Zach Cunningham is questionable with a knee injury he suffered Thursday. That kept him off the field Friday. Neither should have factored significantly into your IDP plans. We'll check Cunningham's status Sunday.

Texans DE Jonathan Greenard (foot) is active for today's game against the Colts. He played through a questionable tag last week and should be in most IDP lineups. Houston made LB Zach Cunningham a healthy scratch, with Christian Kirksey back off IR. That clearly points to Kirksey regaining a full-time spot next to Kamu Grugier-Hill.

The Texans this week designated LB Christian Kirksey to return from IR, and he has practiced with the team. If his repaired left thumb is ready for Sunday's game against the Colts, the returning starter would destabilize LB Zach Cunningham's role. Cunningham had sunk to a reserve spot behind Kirksey and Kamu Grugier-Hill before Kirksey's injury. We'll watch for whether Kirksey makes it back to the active roster.

The Texans have ruled LB Christian Kirksey out for Sunday's game against the Dolphins with his fractured thumb. It's a little surprising after Kirksey played through the injury last week (after it occurred at the end of the Week 7 game). It's tough to know what the LB playing time will look like with Kirksey out. According to the Houston Chronicle, Neville Hewitt "was prepared to play in place of Kirksey last week," when Kirksey played with a "club" on his injured hand. So it appears Hewitt -- rather than Zach Cunningham -- will be the 2nd LB alongside Kamu Grugier-Hill.