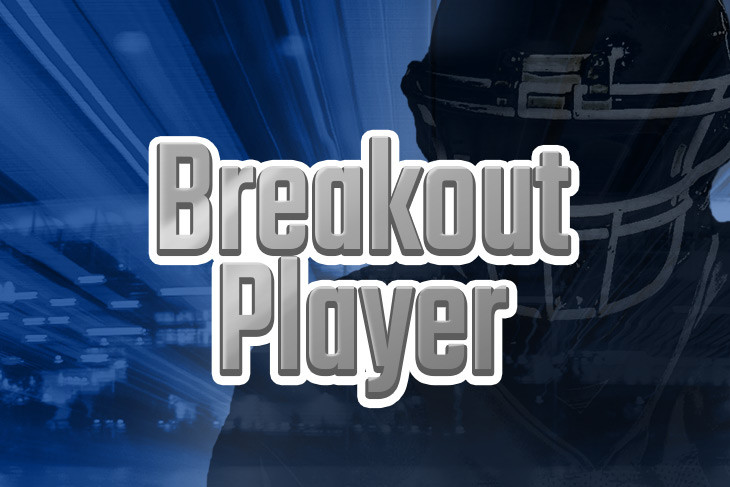 Truthfully, the 2020 Breakout Player wasn’t at all on our radar at this time last year.

He arrived looking like a year 1 contributor on special teams. (His former HC called him the #1 special teamer in the 2019 rookie class.)

Instead, he played just 3 special teams snaps compared to 764 on offense.

Yup -- it was a strong rookie year from Washington WR Terry McLaurin. The former Buckeye laid a foundation to make us believe he's just getting started as a fantasy force.

Let's dive into his 2020 outlook from all angles.

At the 2019 NFL Combine, McLaurin measured at just over 6'0, 208 pounds. He excelled in several key drills…

And he knows it.

"I see myself as a deep-ball receiver with the ability to take the top off any defense," he said after the draft, per NBC Washington. "I grew up liking DeSean Jackson's game."

McLaurin spent 4 years at Ohio State, but he never truly broke out.

That’s a total of 75 catches, 1,251 yards and 19 TDs. Amazing TD rate, yes. And strong catch and yardage totals … had they surfaced in a single season.

But the hollow, advanced-age production — McLaurin entered the league at 23 — left us wanting more. So there was reason to approach this guy skeptically. At least until we reached last September.

McLaurin paid immediate dividends in Week 1 at Philadelphia, snagging 5 of 7 targets for 125 yards and a score. He went on to post a 58-919-7 line on 93 targets. All 4 of those marks led Washington by significant margins.

And McLaurin did it in 14 games — missing Week 4 with a hamstring injury and Week 17 with a concussion — on a bad offense. Washington finished 32nd in points scored, 31st in total yards, 32nd in passing yards and 28th in passing TDs. Their -169 point differential ranked 2nd-worst league-wide behind Miami.

Compare McLaurin's numbers to Round 3 WRs since 2010 and you begin to really take notice. His yardage ranks 2nd behind only Keenan Allen. He cracked the top 5 in catches, yards and yards per target.

How does he compare to all 62 rookies with 40+ catches over the past 10 years? Check it out:

A few of those guys flamed out, but the majority turned into perennial high-end producers.

Thanks to some in-depth film review from Yahoo's Matt Harmon, we see how McLaurin’s production looks repeatable. Per Harmon, McLaurin posted a 76% success rate vs. man coverage. Since 2014, only 2 rookies have posted a better rate. You probably know them: Odell Beckham and Michael Thomas.

Last year — vs. the entire league — McLaurin’s 79.7% success rate vs. press coverage placed him in the 93rd percentile.

And how's this: McLaurin's Pro Football Focus grade of 86.5 ranks 2nd behind only Odell Beckham among all rookie WRs over the past 10 years.

Except, well, they didn’t.

The arrivals include Antonio Gandy-Golden and Dontrelle Inman. Gandy-Golden is a Round 4 rookie from small-school Liberty. Inman, 31, is on his 5th team since 2017.

Trey Quinn built some buzz last summer but totaled 198 yards in 12 games. Steven Sims took over the slot role late and tallied 36 targets, 20 catches, 230 yards and 4 scores. But this is a 5’10, 176-pound former undrafted free agent. He’s not going to infringe on McLaurin's role.

Frankly, not even the coaching staff knows who’ll step into the #2 role. Position coach Jim Hostler said he has “no idea” what the WR corps will look like beyond McLaurin. Yikes.

Sure, there are some big-name free agents available. But Josh Gordon, as of this writing, hasn’t been reinstated. And Antonio Brown has been suspended for half of the season. Neither is a good bet to sign with Washington at this point and make a big impact.

At RB, Washington just released Derrius Guice after an arrest. Losing the most talented pure rusher figures to cut down on this unit’s ground-game efficiency. That statement holds more water with the one-dimensional Adrian Peterson -- now 35 -- in position to see early down work.

So it’s clear: McLaurin is set up to handle a massive offensive role this season.

Turner’s only experience in the role came over the final 4 games of last season, when he replaced his father, Norv. It’s not even worth repeating the limited results (especially with 3 games of Kyle Allen at QB; 1 with Will Grier).

According to the Washington Post’s Sam Forier, “Turner expects to be creative with shifts, motions, formations and play-action.”

While there’s not a large sample in Turner’s background to dissect, one thing we can anticipate is greater play volume. Washington’s 885 total plays (55.3 per game) last year were the 2nd fewest by any team over the past 14 (!) seasons.

That number will almost certainly rise substantially. McLaurin, of course, would stand to benefit.

As for QB play, Dwayne Haskins looks like a near-lock for the Week 1 job. Credit Alex Smith for getting back in the mix following an awful right leg injury. But after missing part of 2018 and all of 2019, he’s clearly disadvantaged.

And Haskins — for all of the flak he takes — at least ended 2019 positively. His final 2 games produced 394 yards and 4 TDs on a 72.1% completion rate. It’s a tiny sample, but it’s the type of improvement you want to see from a rookie QB. Remember, Haskins racked up 4,831 yards and 50 TDs in his 1 starting season at Ohio State. And recall that Washington selected him 15th overall.

Even mediocre QB play should be enough to support a step forward from McLaurin.

McLaurin sits WR19 in our PPR ranks; WR23 in ADP. That’s a noticeable gap in the Round 5 to Round 6 range of most drafts.

While there are often attractive WRs available then — see Tyler Lockett and Courtland Sutton — target upside is McLaurin’s differentiator. We project him for 128 targets, although he could easily top that number if Washington struggles (as expected) and doesn’t get meaningful contributions from another pass catcher (another anticipated scenario).

Flag McLaurin on your MVP Board and get fired up about him as a WR2.