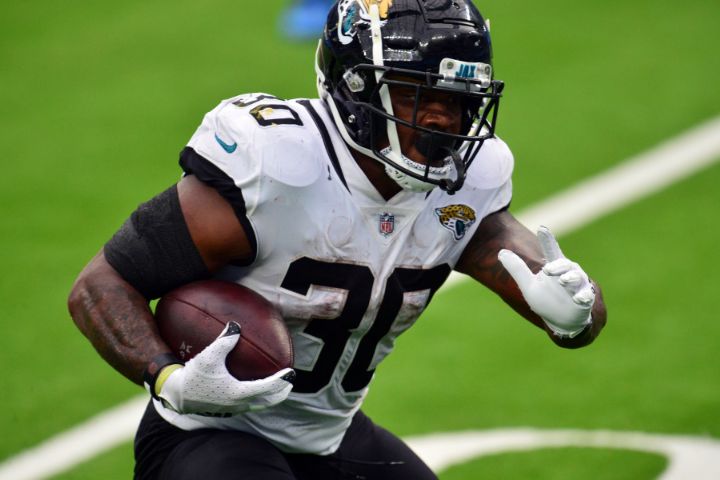 James Robinson made a much bigger impact on the 2020 fantasy football season than we could have reasonably expected from any Jaguars RB … or -- really -- any Jaguar.

The undrafted rookie jumped from a basically undrafted ADP to nearly leading his position in starter-level fantasy weeks.

I lined up all 17 weeks of RB production to find the median score for each spot in the rankings. In PPR formats, 11+ fantasy points landed a player among the top 24 there. Robinson delivered 13 such outings in his 14 appearances.

Only Dalvin Cook produced more (14 in 14 games), with Alvin Kamara the only other back to tie Robinson’s total (and he played 15 games).

Of course, Cook and Kamara still arguably helped their fantasy teams more by posting more top-shelf scoring weeks. But no player at any position matched Robinson for “out of nowhere” production. Not even Justin Herbert. (We knew the 6th overall pick in the NFL Draft would likely start at some point in the season. Collectively, we had no idea who Robinson was last summer.)

Before we get further into the RB performances from the season just past, though, let’s step back to look at the position on whole.

For the 2nd straight season, RBs scored fewer fantasy points than the year before. That seems alarming, given the general trend for the position among NFL teams. Among the 11 categories for franchise-tag values, only TEs and special-teamers trail RBs. League-wide RB carries and rushing yards have trended downward over the past decade.

(Note: All of these graphs use different scales. So steeper slopes don't necessarily mean steeper increases or declines in a given category vs. the others shown.)

But the RB fantasy-scoring dips of the past 2 seasons don’t yet signify a trend. In fact, 2018’s high point looks more like an outlier in what has actually be a steady rise for fantasy points at the position.

The decrease in rushing attempts and production has coincided with overall increases in the receiving categories (despite declines there as well in 2020).

Interestingly, we have also seen an upward trend in RB rushing TDs -- despite fewer carries and yards over the same span.

Credit slight growth in NFL scoring over the past decade, capped by last year’s all-time record for points in a season. My minor takeaway from this point: Even if they’re running less overall, RBs will remain central to TD scoring. (Going out on a limb there, I know.)

Last season, though, also found an 11-year high (as far back as I looked for this article) in the impact of rushing TDs on RB fantasy totals. Rushing TDs accounted for 19.0% of total PPR points at the position. Only 1 of the previous 10 seasons had eclipsed a 17.4% share, with none higher than 18.15%.

What’s that mean? Rushing scores are probably coming down in 2021. But the historical trends also suggest a rebound in receiving.

Of course, there’s also the chance that evolving NFL offenses continue to run more WR routes and spread those short targets around more than before. We’ll see.

For now, let’s shift our focus back to the specific RB performances.

As I mentioned, I started this process by lining up the weekly RB scores from the past season to determine the median score for each spot in the rankings. The resulting levels:

As you might have guessed, no RB tallied more top-5 weeks than Cook (6). Second place belonged to a tie between Kamara and Derrick Henry (5). But the top spot in this chart belongs to a guy who delivered top-shelf scoring each time he took the field last season … even though injuries limited that to just 3 games.

McCaffrey tops the chart again for reaching top-13 level in all 3 of his appearances. Buffalo’s Antonio Williams joins him after racking up 21.3 PPR points in his only active game of the season (Week 17).

Behind Club Perfect, Kamara and Cook were the only RBs to tally top-13 level scores in at least 60% of their outings.

This is where James Robinson rejoins our top performers. Just 5 of his 14 games -- still a solid number -- reached top-13 level for fantasy RBs in 2020. But he finished only 1 game short of the top-24 mantle. That’s awesome for a guy who opened most league seasons on the waiver wire.

The Colts spread the scoring around a bit more than we hoped back in draft season, but Philip Rivers ultimately produced the expected RB receiving effect. Indy ranked 3rd in the NFL in RB receptions -- behind the Chargers and Washington -- after finished just 23rd the season before.

Cleveland is noteworthy as well, ranking 2nd in both top-13 weeks and top-24 weeks. Keep that in mind as you consider Nick Chubb and Kareem Hunt in your upcoming drafts. If we take out the Dallas game he left early, Chubb’s 7 top-13 performances among 11 games would mark a 63.6% rate, creating his own shelf between Dalvin Cook and the rest of the pack in that category.