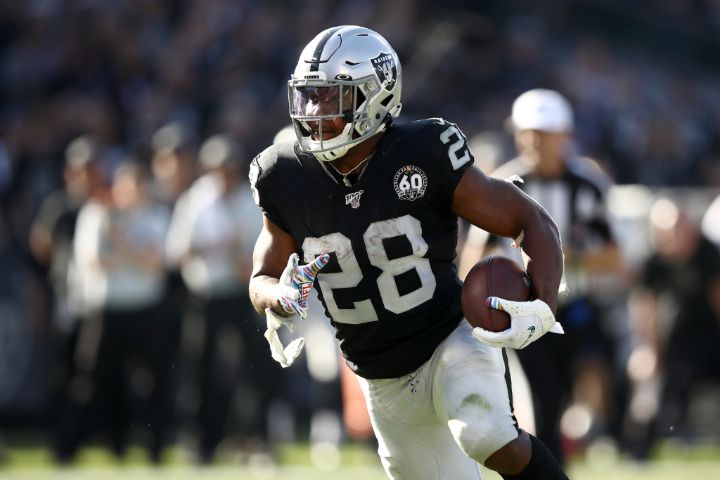 Josh Jacobs just might benefit from some helpful rushing matchups in his 2020 schedule.

Nick Chubb on the other hand ...

Projecting strength of schedule can be dangerous any time of year -- and more so the further you sit from a season’s start. A lot of rookies have yet to even practice with their new teams, much less settle into their 2020 roles. We’re still waiting to see the health on many guys coming off 2019 injuries. And we don’t even know yet which team(s) will employ Jadeveon Clowney or Everson Griffen.

But that doesn’t mean we can’t try to get in front of it.

Let’s start with what we know. If we average the PPR points allowed to RBs by defenses over the past 5 years, we find that the 9 “worst” RB defenses have added more than 10% to scoring vs. the league median.

On the other end, the 8 “best” RB defenses have sapped roughly 10+% of production vs. the median.

On average, that group of 9 “worst” defenses allowed RBs to score at 118.76% vs. league-median production. The 8 “best” defenses held RBs to just 83.65% of production. We’ll get back to those numbers in a few minutes.

Before that, though, let’s look at which defenses we can reasonably expect to be best or worst against RBs in 2020.

I know there’s no way I can accurately project all the rushing matchups. Just look at last year. The 2 worst RB defenses by season’s end -- Carolina and Jacksonville -- each ranked among the league’s 6 toughest RB defenses the year before. And both teams finished 2017 in that “tough” range as well.

Tampa Bay and San Francisco, on the other hand, each finished 3 straight seasons among the league’s 9 weakest RB defenses before ranking as the 2nd and 3rd toughest matchups (respectively) for fantasy RBs in 2019.

Because of those wide swings, I left all 4 of those teams out when selecting these 2 groups.

What you’ll find here, though, are 7 defenses that we can reasonably expect to be favorable matchups for RBs and 7 that appear likely to play the run tough.

Let’s start with the negative matchups (in alphabetical order) ...

The Ravens have ranked among the league’s bottom 9 in RB points allowed 4 of the past 5 years -- including allowing the fewest points in 2018 and 4th-fewest last season. The other year in that span found them ranking 9th-best in Football Outsiders’ run-defense DVOA. The Ravens have added elite run defender Calais Campbell and solid run defender Derek Wolfe to the D-line this offseason and restocked their ILB cupboard with 1st- and 3rd-round picks. Throw in last year’s breakout offense on a 14-2 team that spent most of the season playing with leads, and Baltimore figures to be a negative spot for your fantasy RBs.

The Vikings have finished 5 straight years among the league’s bottom 12 in RB points allowed. They’ve finished 3 straight among the top 11 in FO’s run-defense DVOA, including #6 and #8 rankings in that span. This year presents change, with DT Linval Joseph and DE Everson Griffen gone. But Minnesota imported DT Michael Pierce, who has graded out better than Joseph in run D for 3 of their 4 shared seasons (according to Pro Football Focus). And Griffen earned his 3rd-weakest run D grade through 10 seasons last year. Betting on the Vikings D rather than against it has been the play under HC Mike Zimmer.

Last year’s toughest RB defense ranked 6th in run-defense DVOA after trending back in that direction from a 2017 weak spot. New England has ranked 22nd or lower in fantasy points allowed to RBs 4 of the past 5 years, and the Pats sustained no worrisome losses in run D.

The Saints allowed the 6th fewest RB PPR points in 2019 after yielding the 4th fewest in 2018. They should only be in better shape on D this year with healthier versions of DT Sheldon Rankins and DE Marcus Davenport, plus the addition of LB Zack Baun.

The Jets haven’t done much well lately. But they finished last season 2nd in run-defense DVOA -- their 4th top-11 ranking of the past 5 years. DE Leonard Williams moved on via trade in the middle of last season, but Quinnen Williams carries big upside after arriving as the 3rd overall pick in the 2019 draft. LB C.J. Mosley returns after losing 15.5 games of his Jets debut to a groin injury.

The Eagles have finished 2 of the past 3 years among the 7 toughest defenses on RB scoring. They finished each of those 3 campaigns among the top 9 in run-defense DVOA, including a #4 ranking last year. And then Philly signed DT Javon Hargrave in free agency. Hargrave earned the 4th-best run D grade from PFF among Steelers last season and rated 21st among 200 interior linemen league wide.

The Steelers, of course, lost Hargrave. But 1 of the 3 guys ahead of him in run grade was Tyson Alualu, who plays all over the line and will help fill the void. DE Cameron Heyward comes off the strongest run-D grade of his career in his age-30 season. And DE Stephon Tuitt returns after losing 10 games to a torn pec. Pittsburgh finished each of the past 2 years among the 8 toughest defenses in both PPR points allowed to RBs and FO’s run-defense DVOA.

Now let’s look at which defenses might present the most favorable matchups.

Atlanta improved in run D last year, climbing to 14th in DVOA while limiting RBs to the 11th-fewest PPR points. But that followed 3 finishes of 25th or worse in DVOA and 3 years of allowing the 4th most fantasy points among the previous 4 years. The Falcons didn’t do anything big to actually alter the run D last year. DT Grady Jarrett is the only starter who has actually graded out well in run D.

There’s room for the Bengals to make a big move in this category. They spent big in free agency on DT D.J. Reader, who graded near-elite in run defense last season. They also drafted 3 LBs, led by 3rd-rounder Logan Wilson. I’d bet on him starting in the middle right away. But the Bengals have spent the past 3 years as an entrance ramp to the RB points highway and won just 2 games last year. They’ll need to prove they’re not a positive RB matchup before I’ll believe it.

Cleveland finished 4 of the past 5 years ranked 25th or worse in run-defense DVOA, including a #30 ranking last season. The Browns yielded the 9th-most PPR points to backs in 2019, and now return the same D-line while renovating the LB corps.

The Chiefs finished each of the past 2 years among the 4 most generous RB scoring defenses and have finished 4 straight years 25th or worse in run-defense DVOA. That included ranking last in the league in 2017 and 2018 before shooting all the way up to 29th last season.

Each of the past 5 seasons has finished with the Chargers among the 12 most generous RB scoring defenses. They ranked just 25th in run-defense DVOA in 2019, the 2nd time in the past 3 years they’ve occupied that spot. Free-agent addition DT Linval Joseph -- who turns 32 in October -- is coming off his worst PFF run-D grade since 2011.

Miami allowed the 3rd-most PPR points to RBs last season, the team’s 3rd finish among the top 7 in that category in the past 4 years. The Dolphins have also finished 2 straight years 24th or worse in run-defense DVOA. There’s room for free-agent import LB Kyle Van Noy to improve the run D. But none of the team’s starting D-linemen rated well in that category last season.

Washington has finished 4 straight seasons ranked 24th or worse in run-defense DVOA and 3 of those 4 seasons among the top 7 in allowing PPR points to RBs. We’ll see if a switch from a 3-4 base to 4-3 alters that, but the 2020 Washington defense doesn’t present anything scary for opposing runners. And the offense has a ways to go before opponents are playing with fewer leads.

Now that we’ve got our positive and negative RB scoring matchups, let’s look at the schedules around the league …

And now let’s check the potential boost or drag to scoring for each team’s RBs.

Before we do that, though, keep in mind that this is just a small piece of the overall RB picture … and, frankly, one that could prove wrong once we get into the season and see the actual defensive performance. So don’t read the tables below as an order to target the RBs at the top and avoid those at the bottom.

How should you read them? Let’s start with the scoring used.

Remember the percentages from those 9 worst and 8 best RB defenses earlier in the article? That group of 9 added an average of 18.76% to RB scoring. The group of 8 negative matchups sapped, on average, 16.35% of RB scoring.

Here are the results …

I left out Week 17 in the first chart because most fantasy football leagues exclude that week. The “15-game factor” combines the per-game values I mentioned above to produce a full-season multiplier for a RB’s scoring average.

Let’s put that into practice: Last year’s RB24 in PPR averaged 12.8 points per game. Using the factors from the chart above, that would come out to 202.5 PPR points for the Raiders’ schedule at the high end, 186.0 points for the Packers’ schedule on the low end.

So we’re talking about a span of 16 points over a full fantasy season, about 1.2 points per game. Not necessarily a huge deal, but it can be a difference of 8-10 spots in certain ranges of the RB rankings.

In case you play in a league that runs through Week 17, here’s a full 16-game look …

Just to reiterate: Don’t leave this article with the message “Go get Josh Jacobs! Avoid Aaron Jones!” Instead, consider it a potential tiebreaker between closely ranked RBs.

That said, perhaps a 2nd half for Jacobs that includes both Chargers meetings, a home date with the Chiefs, a visit to Cleveland and a Week 16 home date with Miami is a reason to give Jacobs a little bump.

Josh Jacobs scored as a fantasy RB1 last year. But what does the offseason arrival of Kenyan Drake mean for Jacobs' 2021 fantasy value?