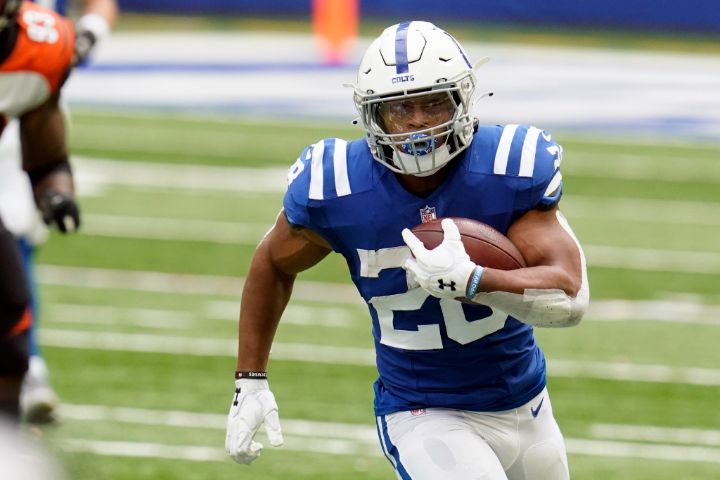 We all know about Jonathan Taylor’s huge fantasy finish to last season. You should also know about the favorable path of matchups that helped him get there.

Here were his final 5 opponents and rushing lines …

Taylor is an anecdote here, rather than the focal point. But his 2020 finish just might provide some hints we can use.

Our main goal in trying to work out strength of schedule right now should be seeking out potential boom weeks. Those are the kinds of performances that can turn a good season into a championship run.

The trick, of course, is that it’s way early to figure out which defenses will give us those cushiest of matchups. There are position battles to sort out, injuries to deal with, new coaches and schemes, and sheer luck.

Dallas, for example, allowed the league’s 2nd-most RB rushing yards last season but yielded just the 13th most PPR points to the position. The key reason: just 59 receptions and 0 TDs on the receiving side.

The Jets, on the other hand, rated a solid 8th in Football Outsiders run-defense DVOA but allowed the 10th-most PPR points to the position. Blame that discrepancy primarily on the Jets allowing the league’s 2nd-most RB receptions. Tying for 12th-most RB carries faced didn’t hurt either.

That begs the question of what we should look for in projecting the next year’s best or worst RB matchups.

If you’re looking for clear signals on which defenses will carry over 1 season’s performance to the next, I’ve got bad news for you: You won’t find them.

(Though if you do, I’d love to hear about them in the comments section at the bottom of this article.)

Whether we’re looking at stat-collection categories, rate stats or advanced metrics such as DVOA, we find high volatility year to year. That’s why I caution against weighing the results here too heavily.

That said, what I did find in looking back over the past 10 years of results is that the stickiest categories appear to be (in order):

But we also know that TDs aren’t as predictable -- in general -- as touches and yards. And the year-to-year correlations in TDs allowed don’t come close to matching the rates for carries, yards and total points.

It’s also worth noting that if you remove last season, the biggest jump in correlation comes in receptions. I mentioned back in my February RB Scoring Review that RB receptions dipped last season. This looks like another data point suggesting that was a fluke. The pre-2020 receptions correlation still sits behind the categories I mentioned above but comes closer to that group than the rest.

Of course, the fact that rushing yards still correlate much more closely than receiving yards further supports that the rushing side should draw primary attention. I also found that total PPR points per carry have correlated better than either total points per touch or rushing points per carry.

So we want to focus on the defenses that saw the most carries, yielded the most rushing yards and allowed the most fantasy points -- with a glance at the reception totals as well.

I know I’m not going to be able to predict the top 8 or bottom 8 defenses for the coming season. But if we throw 6 darts at each board, we should be able to hit some favorable and unsavory matchups. So let’s get to those picks …

Let’s start with the positive matchups (in alphabetical order) …

The Panthers have finished each of the past 2 seasons among the 8 friendliest RB defenses in PPR points allowed. That included allowing the most points in 2019. Carolina ranked just 18th in carries faced and rushing yards allowed last year, which actually kept the scoring down a bit. The 2019 Panthers faced the 7th-most carries and allowed the most rushing yards. Last year’s version ranked just 20th in run-defense DVOA. This year’s edition added LB Denzel Perryman to help the run D, but he has yet to reach 500 snaps in a single NFL season.

If we want a defense facing a lot of carries, then we want a losing team. You might be excited about the passing-game talent on the Bengals offense now, but Vegas has Cincinnati projected for the 5th-fewest wins and 5th-fewest implied points per game in 2021. The Bengals have finished 4 straight seasons among the league’s top 8 in carries faced.

There’s a chance that Detroit gets tougher on run D this year. There was some bad luck in their #2 finish as a RB defense last year, primarily in yielding 29 total TDs to the position. Houston allowed the 2nd most at 23, with Vegas the only other D that allowed more than 20. But the Lions played the run poorly, ranking just 27th in DVOA. The biggest offseason addition to that area was DL Michael Brockers. The former Ram is coming off the worst Pro Football Focus run-defense grade of his career. He checked in just 67th among 138 interior linemen who played 180+ snaps. Is he going to rebound big in a worse defense and on the wrong side of 30? Overall, the Lions are also implied for the 2nd-fewest points per game and tied for lowest projected win total.

Houston sits tied with Detroit for lowest over/under win total and checks in last in Vegas-implied points per game. This is going to be a bad team. The Texans could be good in run defense and still present a positive matchup for RB scoring. Unfortunately for them, there’s also no reason to believe defense will be good. J.J. Watt is gone. LB Benardrick McKinney -- traditionally better against the run than in any other area -- got dumped. And good luck finding a high-upside import.

The Eagles have played tough on run D for a while. They remained among the league’s top half in DVOA against the run and overall last season. But they also dipped to their lowest ranking against the run since 2016. More important for our purposes here, Philly faced the 7th-most carries in the league last season and allowed the 7th-most RB rushing yards. Perhaps that heads back in the other direction. Philadelphia’s D-line looks like a collection of declining assets, though. Fletcher Cox and Brandon Graham stand on the wrong side of 30. DE Derek Barnett has been a disappointment after early-career promise. DT Javon Hargrave arrived on a big free-agent contract last offseason but saw his start slowed by injuries. He could key a turnaround … but he also didn’t play well even when healthy. And the LB corps is weak enough that Minnesota castoff Eric Wilson looks like an upgrade. Vegas also projects this year’s Eagles to rank among the league’s bottom third in wins and points.

These defenses could make for tough weeks ...

Let’s start with this AFC North pair. Each defense has been perennially tough against the run for a while now. The Ravens drifted up to 20th most PPR points allowed to RBs last season -- basically because they yielded 5 receiving scores. That’s more than Baltimore gave up in 2019 and 2018 combined and their largest single-season number since at least 1999. (My numbers only go back to 2000 as of this writing.) So I’ll go ahead and bet on a “rebound,” especially given that they still faced just the 7th-fewest carries and allowed the 7th-fewest RB rushing yards last season. The Steelers, on the other hand, saw opponent volume rise. Yet they still held RBs to the 2nd-fewest PPR points.

The Colts climbed from 19th in overall defensive DVOA and 18th against the run in 2019 to 7th and 9th, respectively, last year. Looks like acquiring DT DeForest Buckner worked. They sat just behind the Ravens, allowing the 21st most PPR points to RBs last season. But the passing game also played a huge role here. Only the Bucs and Falcons allowed a larger percentage of their PPR points via the pass than Indy’s 49.1%. Perhaps that will remain a softer spot this year, but we can semi-ignore it while trying to figure out the tougher RB matchups.

Miami will be at least as interesting a case as Philadelphia on the other side. The Dolphins looked like a defense on the rise last season. That included 22nd-place finishes across the board in most carries faced, rushing yards allowed, receptions allowed and PPR points allowed. They’ll need to keep progressing in that direction to become a negative matchup, but they appeared to take offseason steps in that direction. DT Raekwon Davis saw his playing time increase from Week 8 on, a span that coincided with Miami’s run D grading better. Miami also signed LB Benardrick McKinney after Houston let him go. McKinney is coming off his worst PFF grades across categories last season. But he also played just 4 games before a season-ending shoulder injury. Before that, he had historically rated much better against the run than in any other area.

The Saints have finished 3 straight seasons among the 6 stingiest run defenses -- both in fantasy points allowed and DVOA. The most significant subtraction from last year’s unit looks like DE Trey Hendrickson, a pass-rushing specialist.

No defense saw fewer carries or allowed fewer RB rushing yards than the Bucs last season -- the 2nd straight year in which they led the league in limiting ground yardage. They finished just 7th-stingiest in PPR points allowed, though, because no team allowed more receptions to the position. So, hey, feel free to try Nyheim Hines + prayer against them. But Jonathan Taylor could be in for a tough day. (They play in Week 12.) Oh, and last year’s Tampa D went 11 games without DT Vita Vea. The Bucs allowed 4.0 yards per rush when he was out in 2020, vs. 2.8 with him.

So, we’re treating those 12 defenses as the “Good” or “Bad” matchups for the schedule grid below. I mentioned before the groups of 8 at either end of the matchup rankings. They’ll give us our adjustment factors.

We’ll apply those below to quantify the impact on each team’s RB schedule.

Now for the grid …

Applying the numbers above gives us these rankings through Week 17 (when most fantasy seasons will end):

The 49ers, Falcons and Jets are the only teams reaching 5 matchups with our “weak” group of run defenses. The Jets counter that with 5 negative matchups as well, 3 of those in the final 4 weeks. Atlanta gets 4 negative spots, thanks to sharing a division with the Buccaneers and Saints.

San Francisco, on the other hand, might just have 1 more reason to like Trey Sermon (or a late-round option if you don’t want to buy the Sermon hype).

Arizona, Denver, Minnesota and Pittsburgh follow the 49ers in schedule help. The Broncos seem to get a particularly attractive finish: Lions, Bengals, at Raiders, at Chargers.

On the other end, Josh Jacobs and the Raiders might be in for a tough start: Ravens, at Steelers, Dolphins. The only other negative on their slate comes against the Colts in Week 17.

In case your season runs through the new Week 18, here’s a 17-game version of the Factor chart ...