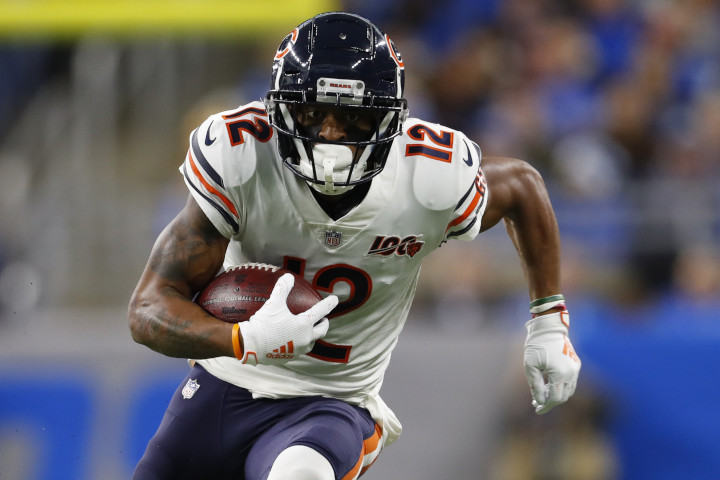 Talk draft strategy with a buddy for a couple of minutes and you’re bound to hear those words.

But is it true?

The number of WRs to average 10+ PPR points per game has spiked the past 2 seasons: 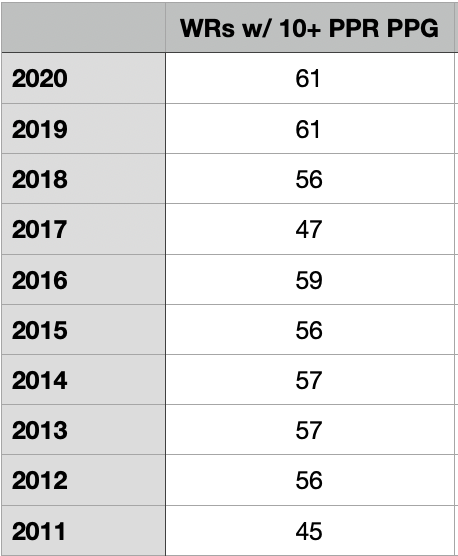 But it’s a different story if we look at WRs to average 15+ PPR points per game, which is a better representation of an every-week starter that’s really helping you win fantasy games. The number of guys to hit that threshold has vacillated over the past 10 seasons: 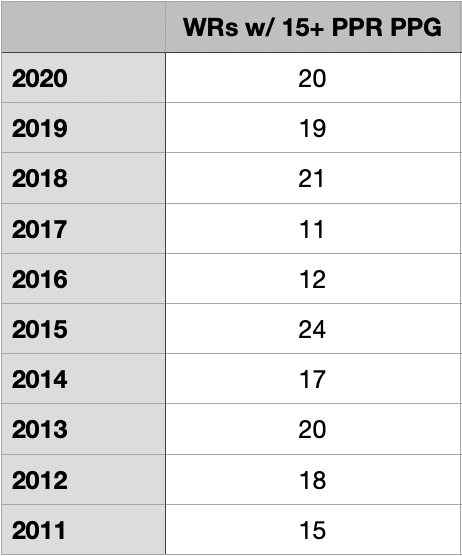 I bring this up because the more drafts I’ve done this year, the more I’ve realized that WR isn’t that deep. At least in terms of difference makers, or even guys you feel good about as weekly starters.

Our 2021 projections have 61 WRs slated to average 10+ PPR points per game -- the same exact number we’ve seen the past 2 seasons. But we have only 17 WRs projected for 15+ PPR points per game. That’d be down from the past 3 years but right around the average of 17.7 WRs that have done it per season since 2011.

So that’s what should drive your WR strategy in drafts this year. Yes, you can afford to wait on WRs a bit longer than RBs. But you don’t want to wait so long that you’re relying on those 10-point-per-game guys in your lineup every week.

More specifically, here’s how you should attack the WR position in your drafts:

Tyreek Hill, Davante Adams and Stefon Diggs. Not much needs to be said here. These are elite talents set to see big volume from quality QBs.

Hill and Adams are worth considering anywhere in the back half of the 1st round -- at least in PPR and half-PPR leagues. Diggs is in play in the late 1st and anywhere in Round 2.

Even in non-PPR leagues, the relative safety of these guys vs. the early RBs makes them fine picks at the tail end of the 1st round.

It varies a bit by scoring system, but this group consists of our next 7 WRs:

Ideally, you’re able to secure at least 1 of the top 10 WRs. That’s much easier to do if you’re picking early in Round 1 because you have 2 shots at this group, both in the late 2nd and early 3rd.

Robinson is the 1 potential exception, with an ADP sitting at 3.09 in PPR, 3.07 in half-PPR and 4.02 in non-PPR. Consider yourself lucky if you’re able to snag him in that range. A-Rob has finished 7th and 9th among WRs in PPR points the past 2 seasons -- and has a good chance to get the best QB play of his career in 2021.

Rounds 3 through 7 is where you want to really build up your WR corps. There are attractive targets in each of those 5 rounds. And the options get shakier -- a lower floor, lower ceiling, or both -- once you get out of this range. Try to have at least 3, and preferably 4, WRs by the time you exit Round 7.

Here are a few of our favorite targets in this territory:

Our 2021 Comeback Player is regularly available in Round 4. He’s 1 of only 5 WRs who have caught 90+ balls in each of the last 2 seasons. Now he gets a big QB upgrade in Matt Stafford.

Higgins averaged 15.9 PPR points in 8 full games with QB Joe Burrow last year. That would have been good for 16th among WRs over the course of a full season. Reports out of Cincinnati have Higgins looking ready to make a year-2 leap.

A buzzy August has our 2021 Breakout Player’s ADP on the rise. But he remains a value anywhere in the 6th round. Jeudy has been the best player in Broncos camp by most accounts.

He finished 20th among WRs in PPR points last year and 28th in non-PPR -- despite scoring on just 3 of 95 catches. Anderson ranked top 13 at the position in targets, catches and yards. Better TD luck will make him a big value at his 7th-round price tag.

If you executed this plan and have 4 WRs through 7 rounds, you’re really just looking for upside bench stashes the rest of the way. In standard lineup-setting fantasy leagues, you’ll be churning the back of your roster via the waiver wire all season. So you shouldn’t spend many -- any? -- of your later-round picks on “floor” players. Shoot for ceiling. And if you miss, dump ‘em for that hot waiver-wire add.

Use Upside Mode in your Draft War Room to find the WRs with the highest projected ceilings in the later rounds of your draft. But here are our favorite targets:

This Jets passing game might surprise. It’s addition by subtraction with the departure of Adam Gase. And QB Zach Wilson has looked good this preseason. Davis, coming off a nice season in Tennessee, has been by far Wilson’s favorite target. Moore is just returning from a quad injury but had been lighting up the practice field since getting drafted in the early 2nd round this spring.

His rookie season was disrupted by a significant leg injury. But Pittman flashed down the stretch and checks boxes for size (6’4, 223 lbs.) and college production (101-1,275-11 in his final season at USC). We like his chances of emerging as the top dog in Indianapolis’ passing game this year. And QB Carson Wentz’s injury has suppressed Pittman’s already-cheap price tag.

It’s been an encouraging preseason for this rookie. He’s been Arizona’s primary slot receiver and seen 9 targets and 3 carries on 47 snaps (about a game’s worth). Moore has a real chance to emerge as the #2 weapon in the Cardinals’ passing game.

Edwards earned a starting job as a rookie out of training camp last year before being derailed by an ankle injury. He’s healthy now and has reportedly been ripping up training camp. Check out Top 10 Fantasy Football Sleepers for more on Edwards.

Multiple Patriots beat writers have predicted that Meyers will lead the team in receiving this year. He’s looked like the #1 WR in preseason and sits 2nd among 107 qualifying wideouts in Pro Football Focus’ preseason receiving grades.

He’s jumped off the screen in preseason action, looking like a rookie ready to make an immediate impact. Marshall has hauled in 6 of 8 targets for 138 yards and owns Pro Football Focus’ 13th-highest receiving grade among 107 qualifiers. He’s unlikely to ascend beyond the #3 spot on Carolina’s depth chart -- but remember that Curtis Samuel saw 97 targets in that role last year.