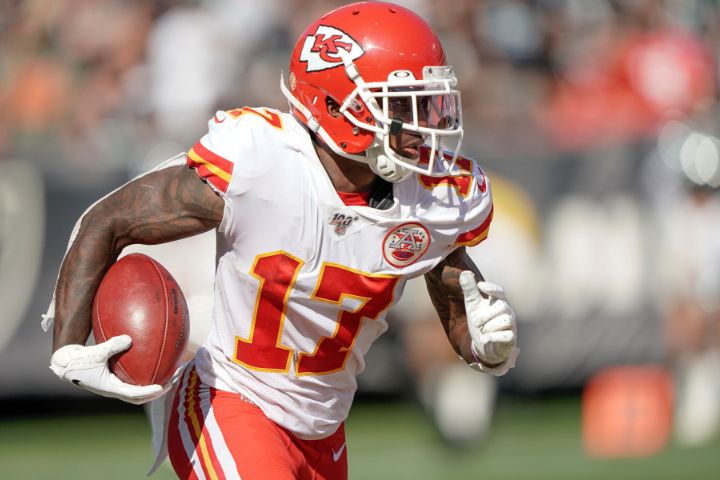 The 2 main keys to your fantasy football draft are:

1) Find a couple of players who significantly outperform their draft slot.
2) Avoid the land mines.

Check out 14 Undervalued Players -- and we've got Sleepers coming later this week. But here we’re looking at potential land mines -- guys who are going much earlier than they should and could thus blow up your championship plans.

Unless any of these 8 players slide well past ADP, go ahead and let a league mate pick them instead.

What does Fournette have going for him in Jacksonville? Volume. And there’s reason to believe that aspect changes.

Fournette has been Jacksonville’s clear (and unsurprising) carry leader since arriving in 2017 as the 4th overall pick. But 2020 saw a dramatic increase in his receiving role. Fournette averaged just 3.7 and then 3.3 targets per game in his 1st 2 seasons. That jumped to 6.7 last year. His 100 targets ranked 4th among all RBs and his 76 catches 5th. He didn’t perform particularly well in that area, though.

The Jaguars have since imported RB Chris Thompson, a mainstay and perennial reception leader for Jay Gruden backfields in Washington. Gruden, by the way, preceded Thompson’s arrival as the new OC in Jacksonville.

Fournette certainly still projects as the dominant carry leader for the Jags. But even that comes in an offense that ranked 26th in points, 20th in total yards and 24th in total DVOA a year ago.

Behind Fournette in current RB ADP sit Todd Gurley, James Conner and Chris Carson -- all with workload projections at least similar to Fournette’s, and each almost certainly positioned in a higher-upside offense. Even Le’Veon Bell -- 5 spots behind Fournette in positional ADP and nearly a full round behind him -- looks similar on the carry front and more likely to stay a high-volume receiver.

Fournette certainly has a path to paying off at his ADP, primarily by reversing last year’s bad TD luck. But he also presents a bust path (not to mention injury history). And he doesn’t stand out for upside even within his ADP zone.

That team had Chester Taylor coming off a 303-carry, 42-catch season, one that placed him 14th among PPR backs. But it also added 1st-round RB Adrian Peterson, a generational talent who quickly pushed Taylor aside.

Is Jonathan Taylor Adrian Peterson? Probably not. (That’s what “generational” means.) But Taylor does arrive looking like a phenomenal prospect.

Mack, meanwhile, hasn’t matched the workload profile of Chester Taylor. Even without the new rookie challenger in tow, Mack has seen his receiving role tumble. He averaged just 1 reception per game last year, even in an offense that saw no player exceed 72 targets. Mack still finished 9th on the team in that category.

Now comes a beast of a rookie, who just finished averaging 6.7 yards per carry across 3 seasons as Wisconsin’s workhorse. Taylor even boosted his receiving profile after 2 quiet years with a 26-252-5 line in 2019 (9.7 career yards per reception).

Who you select as your RB3 (or 4) is certainly not going to kill your fantasy roster -- and probably wouldn’t even hurt it. But Mack heads into 2020 as a “why bother?” draft option. He’ll need a Taylor injury to present any real upside.

The next 4 RBs behind Mack in current ADP -- James White, Tarik Cohen, Jordan Howard and Tevin Coleman -- all face much clearer paths to regular work. And there’s plenty more upside in options beyond that range.

We’ve been drilling Golladay fairly hard on this front all offseason. So let’s start a little softer here.

Golladay at least makes more sense as a fantasy WR1 in best-ball formats than he does when we’re setting lineups. His WR9 PPR finish last season included 5 weeks of 23+ points. He delivered a pair of 2-TD games before Matthew Stafford went down for the season in Week 9.

But Golladay also feasted on abnormal efficiency. He scored on 17% of his receptions. He racked up 18.3 yards per catch, 3.1 higher than his 2018 rate. Golladay also ranked just 19th among all WRs in target share (20.3%). Even his 21.3% share in Stafford games would have ranked just 15th for the season. Golladay ranked just 26th at the position in receptions when Stafford went down.

The QB was also producing well above his norm. Stafford delivered career highs in yards per pass attempt and TD rate before his back injury, helping Golladay post WR7 numbers over that span.

So, are you ready to count on Stafford and Golladay keeping up last year’s elite efficiency? Or are you ready to bet that Golladay suddenly sees a big jump in target share -- with Marvin Jones back from injury, with TE T.J. Hockenson healthier and a year into his development, and with a pass-catching upgrade at RB in D’Andre Swift?

If so, then feel free to reach for Golladay. We’ll continue letting someone else draft him at cost and lean toward higher-floor options for our weekly lineups.

Like Golladay, Kupp is easier to make a case for at ADP in best-ball leagues. If you don’t have to endure his down weeks, then you can focus on the TD upside for the guy who has been Jared Goff’s favorite end-zone option the past 3 years.

But we’re into the portion of the fantasy calendar that focuses on lineup-setting leagues. So it’s time to focus on the downside that comes with Kupp in 2020.

The Rams look poised to continue their altered offensive approach from late last season. That’s when the team deployed fewer of the 3-WR sets that were a staple of HC Sean McVay’s first 2.5 years, leaning instead toward more multiple-TE alignments.

It’s tough to imagine the Rams keeping Kupp down in that range going forward. But Kupp’s production suffered even beyond the opportunity dip last year.

As you’ve likely noticed in our WR rankings, we project Robert Woods well ahead of Kupp. So the sheer fact that Kupp’s ADP sits higher than Woods’ basically guarantees we won’t be touching Kupp in drafts.

Brown comes off a tremendous rookie season. But he has looked like an EASY pass at ADP all offseason.

Brown finished last season 20th among WRs in PPR points and 8th in non-PPR despite tying for just 46th at the position in targets. He racked up 20.2 yards per catch and scored on 15.4% of his receptions. Among the top 50 PPR wideouts, only Kenny Golladay, Darius Slayton and Breshad Perriman posted higher TD rates.

Brown should be heading for more season-long target share in his 2nd campaign, but what’s the ceiling there? Tennessee sported the league’s 4th most run-heavy offense in 2019, despite just a 9-7 record.

His efficiency is a near-lock to fall, and Tennessee’s a bad bet for favorable target volume. Yet Brown’s being drafted even higher than where he finished 2019. No thanks.

The case for Diggs in fantasy goes something like … John Brown finished last season as PPR WR22, and Diggs is better than Brown.

I agree with both of those things. But Brown is still around. And so is Cole Beasley. And so is Josh Allen, and the same offensive coaching staff.

Then there’s Josh Allen. Among 39 QBs with at least 140 dropbacks last season, Allen ranked 30th in Pro Football Focus’ adjusted completion rate. He checked in 31st among that group in passing grade. And he finished 29th among 36 qualifiers in passer rating on deep balls.

Allen isn’t the QB who’s going to help your WR maximize (or even boost) his scoring efficiency.

Diggs is a terrific player, and he’ll surely deliver a few spike weeks. But so will plenty of other WRs going around him (and even well behind him) in ADP.

You could build a case for drafting some of the WRs on this list around ADP. But Hardman’s cost is just a matter of drafters clearly getting over-excited at the combo of the young wideout’s speed and Patrick Mahomes’ skills.

Hardman ranked just 5th among Chiefs in targets last season, collecting 41 for the year. Even that number got inflated by Tyreek Hill injuries. Hardman drew 22 of his 41 targets in the 4 games that Hill missed. Another 4 of Hardman’s looks came in a Week 11 game Hill left early.

The rookie garnered just 1.4 targets per game in Hill’s 10 healthy contests. He then played less than 30% of the snaps in Kansas City’s 3 playoff games, tallying just 6 total targets.

After the season, the Chiefs re-signed WR Demarcus Robinson and restructured WR Sammy Watkins’ contract to keep him around. They also spent their 1st-round pick on RB Clyde Edwards-Helaire, who ranked 3rd in receptions on last year’s loaded LSU offense.

Where is Hardman’s regular work coming from?

He makes sense only as a handcuff to Hill -- or maybe Watkins. And that could be worthwhile in this elite scoring offense. But Hardman’s going too early to be a WR handcuff -- and well ahead of Watkins.

I’m not gonna lie: This call makes me a little more nervous than the others on the list. And it’s not because I’m worried about being wrong on Gesicki. I don’t think he’s very good, and the numbers back that up.

Gesicki ranked just 55th among all TEs in yards per route run last season. He ranked 55th in Pro Football Focus receiving grade. Among 54 TEs who saw at least 20 targets, Gesicki checked in just 39th in yards per target.

Where he won was on volume. Gesicki finished 2019 seventh among TEs in targets. Even from there, though, he ranked just 12th in total PPR points and 15th in points per game.

Gesicki clearly benefited from injuries to others, especially Preston Williams. Gesicki drew just 10.9% of Dolphins targets before Williams went down; 17.5% after the ACL tear.

New OC Chan Gailey has not been friendly to TE production in his career, outside of a year with Tony Gonzalez in Kansas City. The argument against that -- and for Gesicki -- has been that this “TE” is really just a big slot WR. But even with the opt-outs of Allen Hurns and Albert Wilson, Miami still presents a busy landscape of pass-catchers.

Beyond DeVante Parker and a rehabbed Williams, Jakeem Grant and Isaiah Ford remain at WR, with Chester Rogers and Ricardo Louis joining the depth chart (among others). Miami has also added Adam Shaheen at TE.

No one in that paragraph beyond Parker and Williams comes across as a true threat, but if the big argument in favor of Gesicki is volume, then we can’t ignore the competition committee. And there’s also Matt Breida to provide much more receiving upside than any member of last year’s RB crew.

Is there a chance Gesicki gets the target volume to land him among the top 12 PPR TEs by season’s end? Sure. It only took 76 targets to rank 12th in that category last year.

But Gesicki doesn’t look poised to capitalize on that with strong efficiency. And there’s enough of a crowd in Miami to keep his opportunities down -- especially if Gesicki’s just 1 in a pool of slot WRs rather than the clear lead TE.