The studs are obvious in this week's Thursday Night Football showdown. And they're expensive.

We all know Josh Allen, Stefon Diggs and Rhamondre Stevenson arrive as top contenders. We'll hit some other key guys lower in this article. But the biggest question we need to answer is just how to make the salaries fit.

Even with a somewhat conservative projection, Allen sits 2nd among QBs in our Week 13 fantasy football rankings. I say conservative because it falls well short of what he's done in recent meetings with the Patriots.

Week 13 of last year was the "Wind Bowl." Outside of that meeting, Allen has topped 300 passing yards and tossed 3+ TDs in 3 straight showdowns with New England -- including 2 on the road and a home date in the playoffs. He might also be ready to go Full Josh Allen after returning to full practices this week. We hadn't seen that for Allen since he hurt his right elbow at the end of the Week 9 loss to the Jets.

On the New England side, Stevenson gets a workload boost with Damien Harris out (thigh). He got 24 and 22 opportunities the previous 2 times Harris sat out with injuries this year. The Bills have allowed 5.0 yards per carry over the past 5 weeks, though they do still rank 5th in Football Outsiders run-defense DVOA over that span. Buffalo registers as a basically neutral matchup for RB scoring by our adjusted fantasy points allowed.

Diggs, meanwhile, just keeps being Diggs. He racked up another 15 targets in the Thanksgiving Day win over the Lions, his 7th game this season of 10+ targets. Diggs leads the position in total fantasy points and checks in 6th among WRs in target share.

You don't really need to make the case for any of those 3 tonight. But what should we put around them? Let's see what the value charts say ...

(Updated for J.J. Taylor NOT being elevated from the practice squad.) 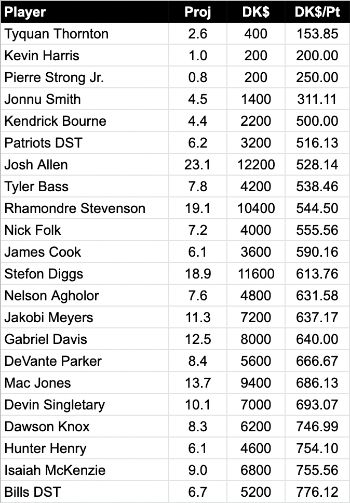 This chart originally had RB J.J. Taylor at the top. The Patriots elected not to elevate him from the practice squad, though -- instead rolling with rookies Pierre Strong Jr. and Kevin Harris behind Stevenson tonight. If either guy does anything in your lineup at minimum salary, then you're golden. Honestly, though, we're totally making up projections on them. They've combined for just 4 carries all season. And neither has touched the ball since Week 6.

Tyquan Thornton has been more involved than his draft classmates, though his playing time has dipped the past 2 weeks with DeVante Parker back. Thornton at least sports the big-play speed to turn any touch into fantasy points.

It'll be tempting to focus salary-cap space on fitting Bills pieces, but get some exposure to Mac Jones. The Patriots QB is coming off his 2 best outings of the season. You probably already know the big numbers from Thanksgiving night, but Jones also completed 85% of his passes the week before against a tough Jets pass D. 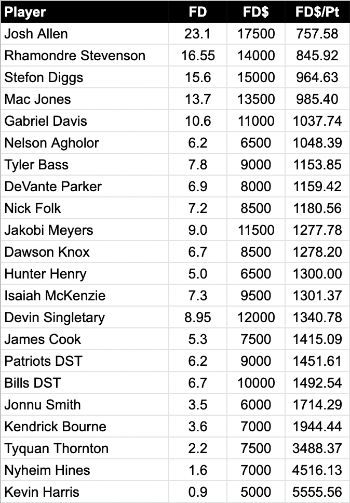 Strong would appear just below Harris in this chart, but it wasn't worth the time and effort it would have taken to display him. Unless you really need the $1000-$1500 in salary, I'd prefer Hunter Henry or Jonnu Smith as the cheap Patriot.

And if you're just playing 1 of the rookie RBs to differentiate in case either does something ... well, then the specific projection doesn't really matter. None of us really knows how much either guy will touch the ball -- if at all.