It was understandable. It was the 1st time in his young career that both Keenan Allen and Mike Williams missed the game. But it was also Atlanta. So a mere 245 passing yards, 1 TD and 1 INT was underwhelming.

That also marked Herbert's 3rd straight week of less than 6.0 yards per pass attempt. And he has just TD passes over his past 4 games.

The San Francisco 49ers might come in looking like the kind of pass-funnel offense that should drive QB volume. They enter Week 10 ranked 4th in Football Outsiders' run-defense DVOA; 13th against the pass. But Niners opponents have actually passed under the expected rate so far this season.

And that run defense doesn't exactly set the table nicely for Austin Ekeler.

The biggest question on the other side might be whether the Chargers can keep it competitive enough to push San Francisco out of its run-leaning ways. Vegas doesn't like those chances. The 49ers head into the night as 7.5-point favorites.

Let's check the values on each side ... 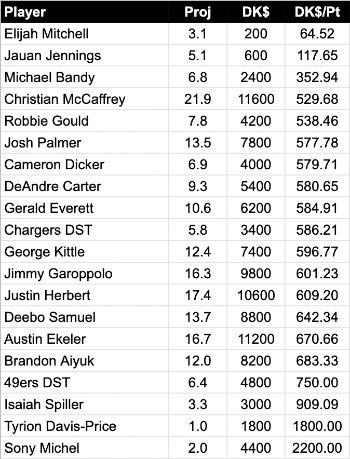 Elijah Mitchell is set to play for the 1st time since a Week 1 knee injury landed him on IR. How much work will he get? No one really knows. Certainly not as much as he would have if Christian McCaffrey hadn't arrived while he was out. But coming in at bare-minimum salary makes Mitchell intriguing, especially vs. the #29 defense in rush DVOA and in a game that finds his team favored by 7.5. There should be plenty of carries to go around the 49ers backfield.

Josh Palmer doesn't register as a bargain, but he has absorbed lead-wideout volume in his past 2 appearances. Palmer went for 8-106 receiving on 10 targets at the Falcons and caught 9 of 12 targets against Denver in his previous appearance. He has 4 games of 8+ looks among 7 this season. 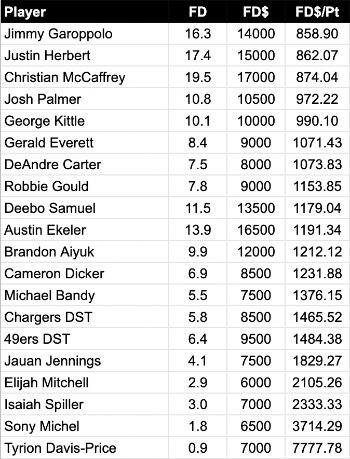