The past 2 weeks haven't been great for an Eagles offense that had been tearing it up.

First came the loss to Washington -- a game that saw both A.J. Brown (ankle) and Dallas Goedert (shoulder) suffer injuries, and the offense just generally turn sloppy. Philly managed just 264 total yards in losing its 1st game of the year.

But things didn't get much better at Indianapolis last week. The Eagles pulled out a late victory, but they also posted their 2nd-worst offensive performance of the year by Football Outsiders' DVOA -- ahead of only the rain-soaked Week 4 win over Jacksonville.

It was the 1st game without Goedert. To be fair, though, it was also the best defense they have faced to date. The Colts sit 10th in DVOA for the season and have gotten stronger in recent weeks.

Green Bay has also put up 3 of it's strongest defensive outings among the past 4 games. But last week's loss to the Titans marked 1 of the Packers' worst performances on that side of the ball. It was easily their worst rating to date in pass D.

The remaining options have allowed 2 straight opponents to go over 400 yards -- Green Bay's only 2 games of 400+ yards allowed this season. The Titans -- yes, the Titans -- threw for 320, the most passing yardage the Packers have yielded all season.

On the rushing side, Green Bay sits 8th most friendly to RB scoring by our adjusted fantasy points allowed. So this just might be a get-right spot for Eagles offensive studs.

Let's check the showdown values plays for our DFS lineups ... 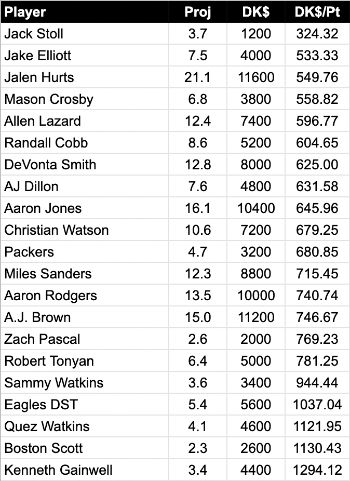 Jack Stoll looks like the lead TE in the wake of Goedert's shoulder injury. That only produced 1 target vs. Indy last week, but he played 81% of snaps and ran a route on 71% of Jalen Hurts' dropbacks. That rate trailed only DeVonta Smith (100%) and A.J. Brown (91%).

Brown proved just OK for fantasy last week -- 5 catches, 60 yards -- but got back to his usual playing time. So don't worry about the ankle. He and Smith combined for 64% of Philly targets in that game as well. So both will be well worth considering as you build your lineups tonight.

It's also worth noting that the Eagles actually played well on offense against Washington, outside of the turnovers. Football Outsiders rated in the team's 2nd-best offensive performance of the season by DVOA -- 2 weeks after their best performance (vs. Pittsburgh).

Sanders and Aaron Jones each find good spots for fantasy upside. The Eagles arrive 26th in run-defense DVOA; the Packers 29th. And both of these offenses want to run the ball. 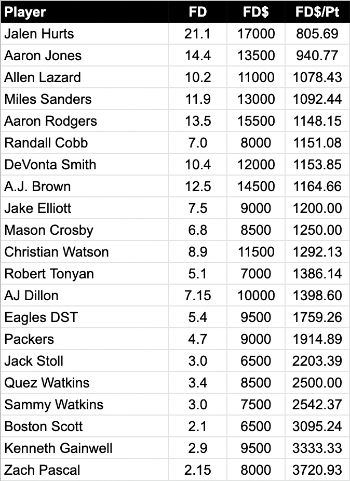 Randall Cobb returned from IR last week and immediately found a prominent role. He played 56% of offensive snaps -- his 3rd-highest rate in 7 games this year -- and drew 6 targets. That tied for 3rd on the team and made up a decent 15.4% target share. He proved efficient, catching all 6 for 73 yards. Just as importantly, he returned as the slot leader. That has been a vulnerable area of the Philly defense since CB Avonte Maddox went down. (He's on IR.)