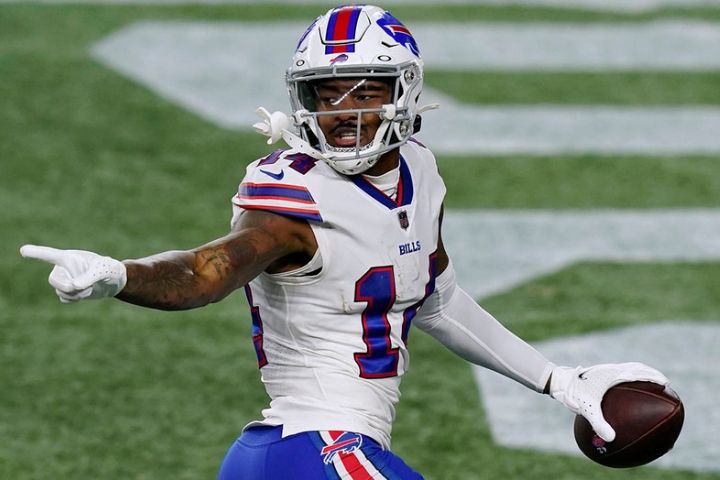 Vegas sure doesn’t expect Monday Night Football’s matchup to go the way it did when these teams met last year.

In a Tuesday-night, COVID-delayed, Week 5 clash, the Titans stiff-armed the Bills en route to a 42-16 victory. Stefon Diggs posted a nice 10-106 line on 16 targets, but no other Buffalo players delivered noteworthy lines.

For Tennessee, Derrick Henry managed only 57 rushing yards and Ryan Tannehill just 195 yards passing. But they accounted for a combined 5 TDs. A.J. Brown led the receiving with a 7-82-1 line on 9 targets.

This time? Vegas has visiting 4-1 Buffalo as the 6-point favorite, carrying the 4th highest implied team total for the Week 6 slate. The Bills have racked up 436 total yards or more in 3 straight outings. The Tennessee defense, meanwhile, yielded 454 yards to the Jaguars last time out.

So what’s going to happen in the final game of Week 6? And who will be the key players in making that happen? 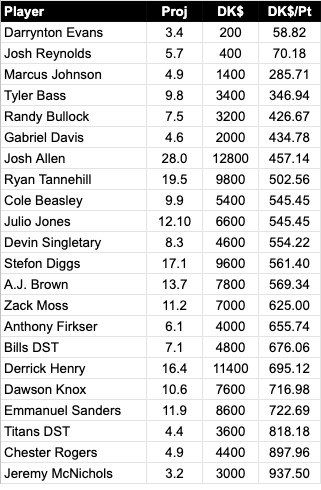 The intrigue starts right away. Evans came off IR this week, and we’re assuming he’ll play against the Bills. How much? That’s anyone’s guess. Jeremy McNichols has led Titans RBs in targets with Evans out, but 12 of his 23 came in a single game. Does Evans immediately take most of McNichols’ playing time? We’ll see. But at the absolute minimum price, Evans needs only to be active to be worth strong showdown consideration.

Josh Reynolds would look much better if A.J. Brown doesn’t play. Tennessee added Brown to the injury report Sunday and listed him “questionable” because of an illness. We’ll see about the #1 wideout’s status as the game approaches.

Marcus Johnson played 75% of the Titans’ offensive snaps last week, but the team is welcoming Julio Jones back for the 1st time since Week 3. Like Reynolds, Johnson might have trouble finding playing time.

On the Buffalo side, Tyler Bass comes up 1st. He does rank 2nd among kickers in fantasy points per game entering Week 6. The Titans have been a neutral matchup to kicker scoring so far. Otherwise, you’re basically playing around with lineup configurations to see who to pay up for.

Be aware that more multiple-TE sets have decreased Cole Beasley’s playing time. He went from 60%+ snap share over the first 3 weeks to 50% and then 39% the past 2 games. 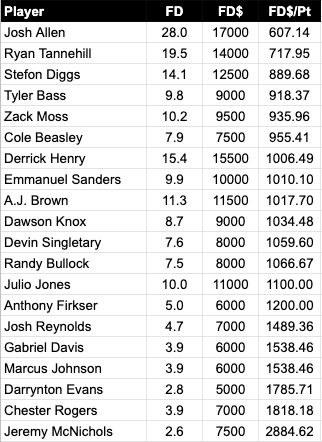 According to our adjusted Fantasy Points Allowed formula, Tennessee delivers the biggest boost to WR scoring. The Titans rank 3rd-worst in adjusted fantasy points allowed to that position.