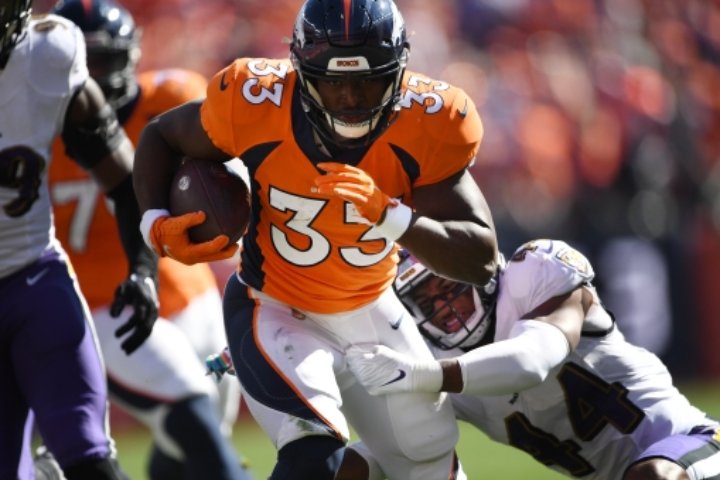 Usually, a primetime Chiefs game means that Patrick Mahomes and crew are the exciting part. But fantasy football folks are fired up about someone on the other side this week.

With Melvin Gordon out, Broncos rookie RB Javonte Williams is headed for his 1st NFL start and clear lead-back status.

If we get a classic performance from the Mahomes Chiefs that digs a quick scoring hole for the opponent, then Williams could be in a tough situation. K.C. hit the week having faced the 5th fewest RB carries on the year.

The matchup looks quite positive overall. Kansas City sits just 28th in run-defense DVOA, according to Football Outsiders, and 26th in total defensive DVOA. But the Chiefs have played much better lately. They’re up to 16th in “weighted” DVOA, which weighs recent games more heavily.

Last time K.C. took the field, they delivered their best defensive performance of the season so far against Dallas -- 1 of the strongest offenses they’ve faced this year.

So what’s in store for tonight? 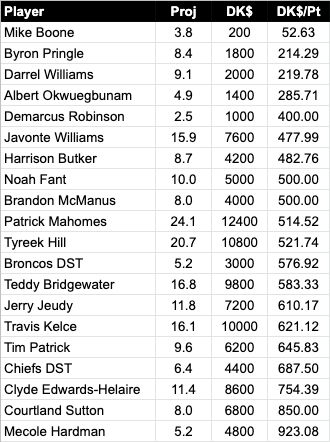 Javonte Williams isn’t going to sneak up on anyone as a showdown play tonight. But what about Denver’s now #2 RB, Mike Boone? The Broncos have accumulated the 9th most RB rushing attempts in the league this year. Williams certainly should be in line for a larger share of the split than usual tonight. But he’s also not likely to absorb all of what Melvin Gordon leaves behind. Boone has played just 7 total offensive snaps this season, and his next carry will be his 1st of the year. But the Broncos gave him a 2-year contract in free agency this offseason, before drafting Williams. Anything Boone can give us at minimum price will be welcomed, especially with all those high-priced Chiefs on the other side. 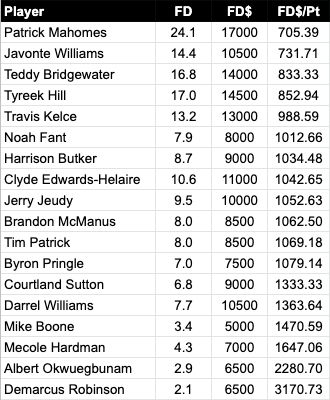 Even with the big salaries among Chiefs, the big 3 still land among our top 5 values for FanDuel showdowns. With the half-PPR scoring and no multiplying of salaries over here, it’s tough to get away from Patrick Mahomes as the primary MVP selection.