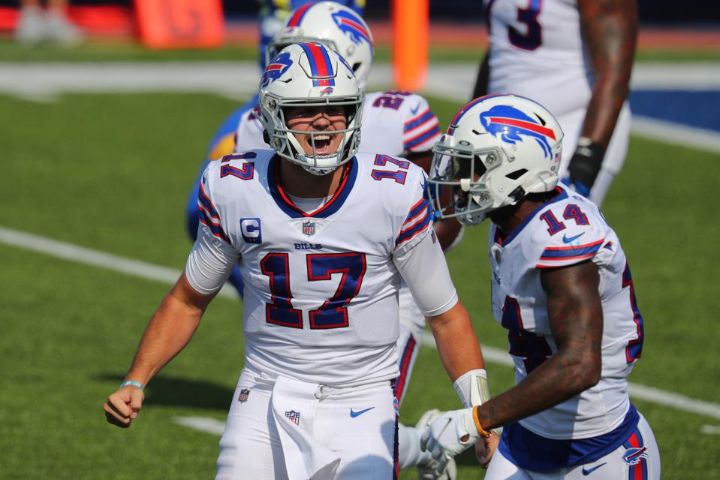 This week’s Monday night appetizer should be entertaining.

Josh Allen and Patrick Mahomes enter the day as the #2 and #4 QBs in fantasy points per game, respectively. Let that remind you how good Allen has been for fantasy. His 21-point outing at Tennessee last week marked a 25% scoring dip from his previous low or the season. He outscored Mahomes 3 of the first 4 weeks.

Mahomes, meanwhile, has been the only QB other than Dak Prescott to crack 40 fantasy points in a game this year. He did so with that monster 5-TD game at Baltimore in Week 3, just to remind us what he’s capable of.

We’ll have no Sammy Watkins on the K.C. side for this one. Buffalo should get RB Zack Moss back, but we’ll have to watch to see whether WR John Brown we’ll play. And the Bills could still be missing top corner Tre’Davious White and key coverage LB Matt Milano, though both seem to be trending toward playing.

Zack Moss hasn’t played since Week 2. He logged 12 and 8 touches in the 2 games he did play, though. And Devin Singletary struggled the move the ball over the past 2 games. He averaged just 2.8 yards per rush across 29 carries and even managed only 1 reception in the loss to Tennessee. Moss opened the season not only involved on offense overall but garnered 9 red-zone opportunities in Week 1; 6 from inside the 10-yard line.

He could be the key to tonight’s 1st showdown slate. Moss not only presents a shot at a TD but will also help you build around those expensive, high-ceiling QBs.

Chiefs WR Demarcus Robinson is another cheap option, with Sammy Watkins’ absence. Robinson played a season-high 68% of the snaps in the Week 5 game Watkins left early. And any skill-position player who takes the field with Mahomes has a shot at reaching the end zone.

On FanDuel, Moss and Robinson don’t present nearly as much value, but they could still be key in allowing you to fit both QBs plus 1 more 5-digit salary. Bills TE Tyler Kroft looks like the cheapest truly viable option here, unless you want to take a shot on T.J. Yeldon ($5,500) maintaining a role with Moss back. (Of course, Moss turning up as a healthy scratch would change things here … but would also be surprising.)