Here's how exciting tonight's game is: 4 of the top 5 players in the 1st value chart below are the kickers and defenses.

But it's a football game, and we need some reason to watch it besides admiring Saquon Barkley's thighs, right?

The Giants present some value at WR. Sterling Shepard and Richie James lead the team in targets through 2 games. It was David Sills V, though, leading Giants wideouts in snaps and routes last week.

Of course, Dallas' defense has played the Buccaneers and Bengals tough through 2 weeks -- holding both Tom Brady and Joe Burrow under 200 yards passing. 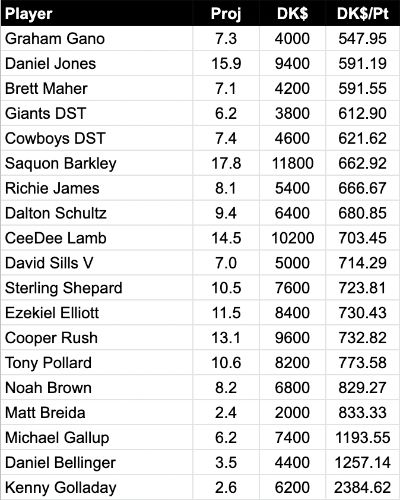 It's interesting that Tony Pollard has already climbed so close to Ezekiel Elliott in DK salary. He did trail Elliott in playing time and routes last week, but Pollard held the 7-2 target edge after matching Elliott at 2 targets in Week 1. He certainly looks like the higher-ceiling option ... though also the riskier touch bet.

Dalton Schultz is not expected to play. That adds rookie TE Jake Ferguson to the mix here at just the $200 minimum salary. There's no way to know how much of a receiving role he'll play, but Ferguson did get in for 34 snaps and 8 routes last week. He also caught 30+ passes in each of his 4 seasons at Wisconsin.

Michael Gallup is also not expected to play, which raises the ceiling for Noah Brown. 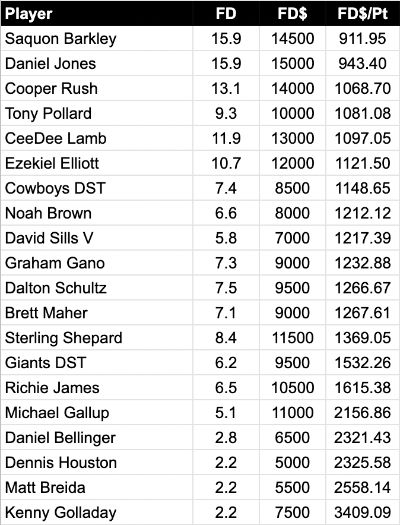 Building a FanDuel showdown lineup is often more about deciding who to leave out than who to include. Daniel Jones looks like a big money guy to strongly consider benching here.

He hasn't played a full game against Dallas since the 2020 season. But as I mentioned, this year's Cowboys have been tough in pass D. They sit 6th in Football Outsiders DVOA against the pass through 2 weeks and have limited Tom Brady and Joe Burrow to a combined 5.7 yards per pass attempt.