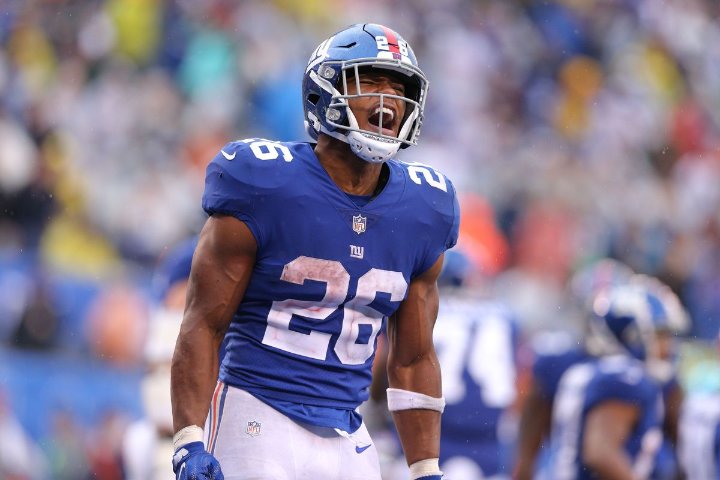 It looks like we're about to get Giants RB Saquon Barkley back for the 1st time since early in Week 5.

His return couldn't be more timely, as New York hits the road to take on a tough Tampa Bay team ... but one that has showed more cracks lately than it previously seemed to have.

Barkley makes for an interesting fantasy football option tonight, and he just might be a key to unlocking sneaky value for QB Daniel Jones.

On the other side, we're all waiting to see whether Buccaneers TE Rob Gronkowski is finally ready to play. His status is holding those of at least 2 teammates hostage. Could his return also help Tom Brady rebound from a recent slide? 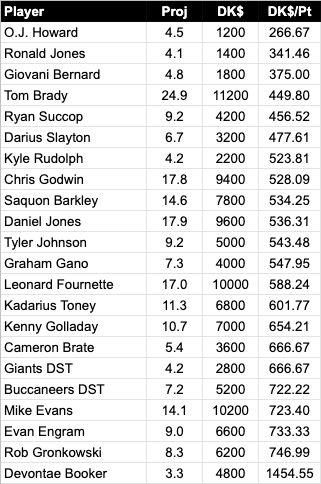 Let’s start with Saquon Barkley, who returns at $1400 less than his DK Showdown salary from Week 5, when last we saw the star back on the field. And that week’s price was a season-low at the time. So his salary presents opportunity.

You’ve probably heard about the Buccaneers being a little difficult to run on, but someone needs to remind their fantasy points allowed about that.

Four of the past 5 Tampa Bay opponents have had a RB top 16 PPR points. That span began with a 10-74-2 receiving line for Myles Gaskin -- in a game that also saw him get only 5 carries -- an explainable performance. But then Week 7 produced 133 total yards for Khalil Herbert, including 100 rushing on 18 carries. Then came a solid 19-61-1 rushing line (plus 3-15 receiving) for Alvin Kamara and last week’s 24-64-2 for Antonio Gibson.

The yards per carry obviously weren’t incredibly efficient for Kamara or Gibson, but that’s 3 consecutive games of an opponent RB getting 18+ carries against the defense that has faced the league’s 2nd-fewest rushing attempts. Barkley has run more efficiently than both Kamara and Gibson this season, according to Football Outsiders DVOA. And he’s certainly capable of Gaskin-style receiving exploitation -- if given the opportunity. It’s also worth noting that Tampa will be missing key run defender DT Vita Vea (knee).

As of this writing, we aren’t sure whether the Bucs will also be missing Rob Gronkowski. He’s officially questionable and finished the week by missing Saturday’s final practice. Before that came 2 days of full participation, so we’d bet on the veteran returning. But the fact that he’s basically been out since Week 3 but never been placed on IR suggests that everyone involved in deciding whether he’ll play is effectively guessing.

Gronk tried to return for Week 8 but made it through only 6 snaps in that game. And his status affects the other 2 Tampa TEs in our chart above. Let’s check out the weekly non-blocking pass snaps (according to Pro Football Focus) for the season: 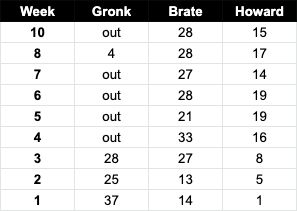 As you can see, Cameron Brate is the significantly better bet than Howard to be in route. That said, the past 4 games haven’t produced huge differences in their target counts:

Because we really haven’t seen Gronk in action since Week 3, it remains to be seen just how the snaps sort out with the vet back. 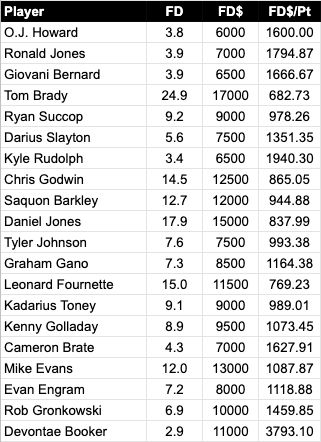 With Barkley expected back tonight, let’s take a look at QB Daniel Jones’ numbers with and without the star RB so far.

Jones, of course, left the same Week 5 game at Dallas in which Barkley suffered his high-ankle sprain. Take that game out, and we have 4 contests with and without Barkley. Here’s what Jones has averaged with Barkley …

And 4 games without Barkley …

There’s obviously been much more at play over those 2 stretches than whether Barkley was on the field. But Barkley is quite the worthwhile piece, and the offense on whole has gotten healthier. Assuming Barkley does play, WR Sterling Shepard looks like the only significant player who’ll be missing.

Jones looks intriguing against a Tampa defense that just allowed 29 points to Washington and 26-of-32 passing to Taylor Heinicke.

On offense, Tom Brady has masked some recent (relative) struggles with TD passes: specifically 4 apiece against Chicago and New Orleans. His past 4 games have produced his 4 worst PFF passing grades of the season. Since Week 6 -- the beginning of that span -- Brady ranks just 20th in passing grade among 39 QBs with 50+ dropbacks.

Of course, he also ranks 5th among QBs in fantasy points per game over that span. So it falls short of being a truly worrisome issue.