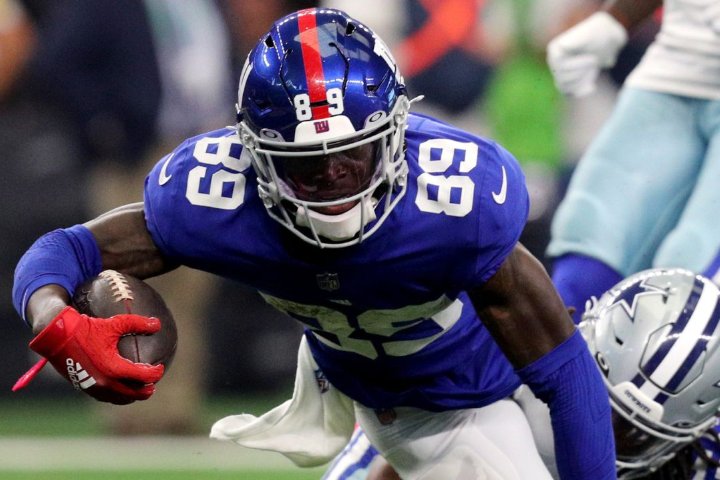 It ain’t the Dak Prescott conundrum, but the Giants have some questions to answer with the Monday night inactives.

Sterling Shepard and Kadarius Toney each seem likely to play, but they’re officially questionable. So we’ll see about 7 p.m. ET whether either or both will be active for the game. And their statuses will affect the outlooks for others such as WR Darius Slayton and TE Evan Engram.

The Giants’ offense faces 1 of the league’s most favorable scoring matchups so far. The Chiefs have allowed 27+ points to every opponent but 1 through 7 weeks. No defense is allowing more yards per play.

On the other side, Kansas City comes off a shockingly bad performance at Tennessee: just 3 points and a season low in total yards. Are there problems that need fixing, or was that just a bad week?

Let’s move on to the value charts … 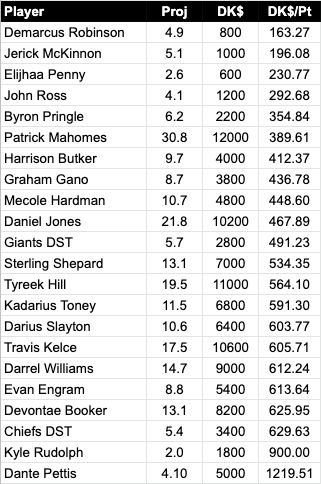 First of all, there’s nothing significantly wrong with the Chiefs offense -- other than maybe a need to turn the ball over less. But for fantasy purposes, we don’t really care whether they fix that.

Moving on … Demarcus Robinson tops the DK value chart by virtue of his cheap salary, but he’s interesting more because his role hasn’t shrunk Robinson played a season-high 79% of the snaps in the loss to Tennessee and drew a season-high 6 targets the game before that.

Byron Pringle nearly triples Robinson in salary and caught twice as many balls over the past 2 weeks, but Robinson has tallied 1 more target over that span amid significantly more playing time.

The rough game at Tennessee has Patrick Mahomes matching his season-low salary from the Buffalo matchup. His season average of 299 yards per game sits just 1 yard shy of the DK 300-yard bonus. 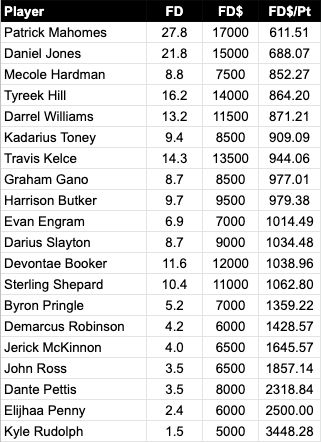 After being questionable with his quad issue the previous 2 weeks, Tyreek Hill didn’t even make the injury report this week. He should be a key factor in the proceedings Monday night.

Hill’s iffy status the past 2 weeks seemed like it should help Mecole Hardman’s upside, but he saw no real playing-time boost and finished each of those games with just 5 targets and 4 catches.

So if we separate his outlook from Hill’s, then it’s not hard to like Hardman’s price this week -- especially against a Giants D that’s been 11th most friendly to WRs by our adjusted fantasy points allowed.