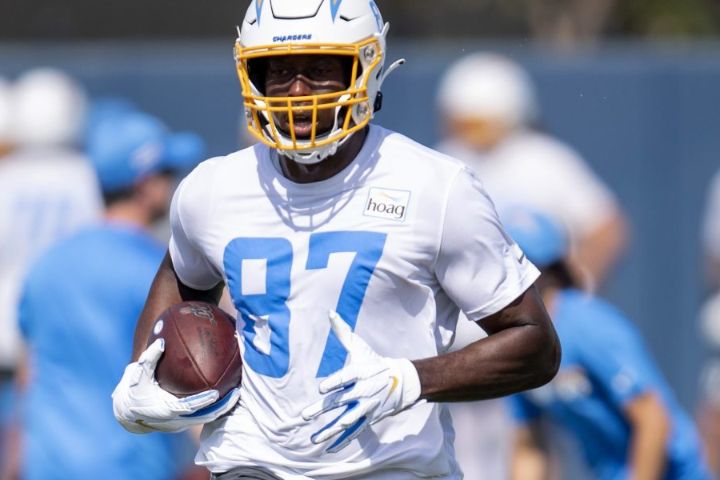 A secret weapon for tonight’s clash might just be guessing which Chargers RB scores a TD.

Then again, that group might just remain worthless beyond Austin Ekeler. The tiny costs of the other guys, though, add intrigue -- especially with a concentrated group of high-dollar playmakers we want access to.

Of course, you don’t have to dig all the way to the bottom of the bargain bin to find players capable of outperforming their DraftKings showdown salaries. The staircase to that price basement will take you past pass-catchers from both sides in the mid-to-low ranges of salary -- many with better opportunity outlooks than the L.A. backs.

Meanwhile, the Las Vegas RB puzzle might not be put together until the game starts.

Let’s get to the specifics … 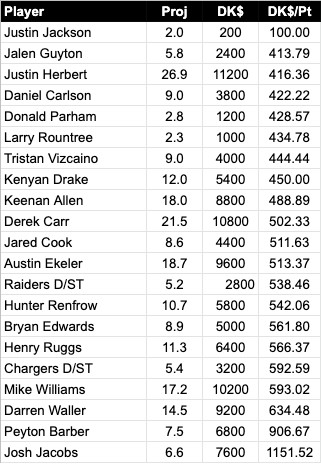 Justin Jackson jumps to the top of the value chart because his salary sits at the bare minimum. Anything he gives us at a $200 is frosting. But his 7 carries (for 26 yards) and 2 targets through 3 weeks leave us no reason to believe he carries difference-making upside. Larry Rountree, at least, has seen 3 carries (to Jackson’s 1) in the red zone, including 1 inside the 5-yard line. That said, the rookie has also followed an 8-carry opener with just 5 attempts for 2 yards and 1 catch or a loss of 1 over the past 2 weeks. If either Jackson or Rountree finds his way to the end zone at his clearance price, then he’ll give you a huge boost. But it looks far more likely that neither offers anything … unless Austin Ekeler goes down.

Jalen Guyton’s stats look similarly underwhelming, but he has topped 60% playing time in every game and run 81 more pass routes than #4 WR Josh Palmer. So his path to relevance is likely shorter than those of the Chargers RBs.

Jared Cook has followed a 5-catch opener with just 5 total receptions over his past 2 games. But he entered Week 4 ranked 6th among all TEs in routes. Even Donald Parham has run 12+ routes in each game and sits near the bottom of the salary chart (with an end-zone friendly frame).

On the Raiders side, we’ll probably need to wait until the inactives come out tonight to find out whether Josh Jacobs is playing. That will impact the outlooks for both him and Peyton Barber -- though we still might not know until after the game has started just how much each guy will touch the ball. Consider both RBs risky either way.

Finally, the QBs probably shouldn’t sit as far apart in our chart as they do. We project Justin Herbert just over 300 yards passing, so his DK point total includes the 300-yard bonus. But our Derek Carr projection sits just 4 yards short of 300. So really, they both look like solid bets to achieve that bonus. Unless you’re building a bunch of lineups, I’d try to include both QBs. 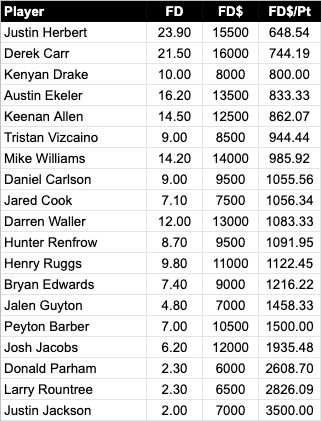 Without the DK yardage bonus, Herbert and Carr sit right next to each other over here. Otherwise, things look pretty straightforward.

We’ll see whether the Chargers get top CB Chris Harris back. He’s questionable after limited practices all week following a pair of missed games. His return would likely impact Vegas slot WR Hunter Renfrow the most.