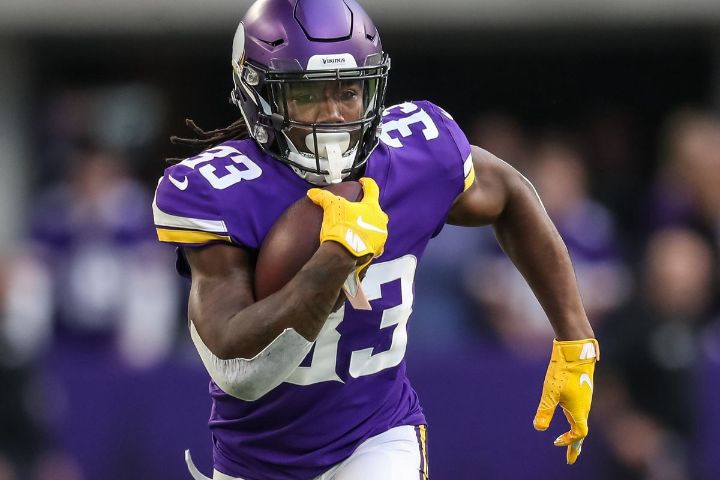 Unless you’re really trying to differentiate in a large-field tournament, it’ll be tough to get away from Vikings RB Dalvin Cook for showdowns tonight.

Of course, we all know about what Cook’s done lately: 369 rushing yards, 109 receiving yards and 6 total TDs in 2 games since returning from injury; TDs in every game this season.

It’s worth noting, at least, that the Bears will be the 2nd-best defense he has faced this season by Football Outsiders DVOA -- both overall and specifically against the run. Cook managed a more pedestrian 14-63-1 rushing and 2-8 receiving against the Colts back in Week 2. He also averaged just 3.8 yards per carry at Seattle back in Week 5 before leaving that game with a groin injury.

That said, Cook still finished RB19 and RB10 for half-PPR scoring in those weeks, respectively.

His 1 meeting with the Bears last season found Cook rushing for only 35 yards on 14 carries (2.5 per attempt). But he did score his team’s lone TD and catch 6 of 8 targets for another 35 yards.

This year’s Bears defense hit Week 10 as the 3rd-stingiest RB defense by our adjusted fantasy points allowed. It limited Derrick Henry to a 21-68 rushing line just last week. It also yielded a 17-106 to Ronald Jones -- in Chicago -- 4 games prior.

Whether you’re looking to build around Cook or try to build without him, here are the values from our projections ...

Cordarrelle Patterson should also factor into the backfield mix more than usual. He has already been lining up there more than at wideout, but he hasn’t reached 4 carries in a game since Week 3 and has only exceeded that number once. Patterson also has reached 4 targets just twice -- and not eclipsed that level -- but those 4-target games each came within the past 3 weeks. There’s a chance we see Patterson lead the backfield in touches tonight … or he could remain around the 5.3 opportunities he’s been averaging per game so far.Chicago’s backfield presents some intrigue. David Montgomery’s concussion leaves the Bears down their top 2 RBs (Tarik Cohen’s on IR). That brings Lamar Miller to the active roster for the 1st time, and he’s nearly a must-play at minimum salary in DK showdowns. Miller spent 2 seasons as the lead back for Miami (2015-16), when Bears OC Bill Lazor got his 1st shot at coordinating an NFL offense. HC Matt Nagy is handing Lazor the play-calling duties tonight for the 1st time.

Ryan Nall is the remaining piece but also the most expensive. Combine that with him drawing 0 carries so far this season, and it’s tough to make a case for him.

On the other side: Irv Smith’s injury makes Kyle Rudolph worth highlighting. Here’s the matchup effect of the Chicago defense on each position so far, according to our strength-of-schedule formula:

Smith and Rudolph combined for 8 targets against Detroit a week ago and 9 targets in the loss to Atlanta 2 games before that. Especially if Chicago succeeds in slowing down Dalvin Cook -- and scoring a few points -- there’s clear upside to Rudolph tonight.

Nick Foles at $1000 less and facing a worse pass defense looks like the stronger QB starting point on either site tonight. WR Anthony Miller also checks in at a healthy savings vs. teammate Darnell Mooney on both sites. Mooney holds just a 54-50 target lead for the season. Miller has edged Mooney 19-17 over the past 2 games.

Rudolph checks in at an attractive salary here as well. There’s no Lamar Miller in the FD pool, though. So get your shares of him on DK if you want some