Monday night doubleheader means twice the showdown opportunities, and there are plenty of offensive factors to choose from in these 2 games.

One is expected to be missing from the Buffalo side, however. WR Gabriel Davis is expected to be inactive because of the late-week ankle injury. That creates opportunity for other Bills wideouts, including a particularly cheap young player near the top of the table.

On Tennessee’s side, WR Kyle Philips is expected to play through his questionable tag. RB Dontrell Hilliard has already been ruled out, though. Does that enhance the receiving opportunities for Derrick Henry, or does his 12% target share from Week 1 go to WRs/TEs?

The 2nd game features a couple of stud wideouts who posted big numbers in Week 1 … but also plenty of rushing upside. 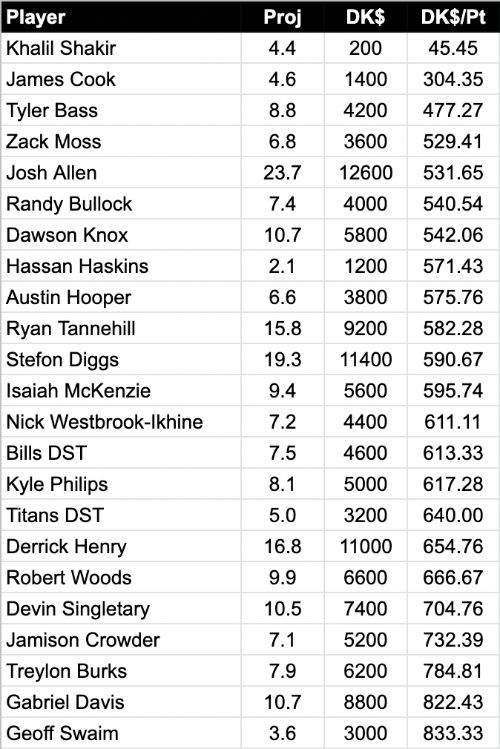 Khalil Shakir was a healthy scratch in Week 1. If the Gabe Davis injury pulls him onto tonight’s roster, though, then the rookie presents nothing but upside from his minimum salary. And that fantasy projection for him includes the chance of Davis playing.

Isaiah McKenzie and Jamison Crowder also gain upside without Davis. Stefon Diggs, however, might become a player you can’t avoid.

James Cook’s light Week 1 leaves his salary low as well, putting him into play to help fit the studs. 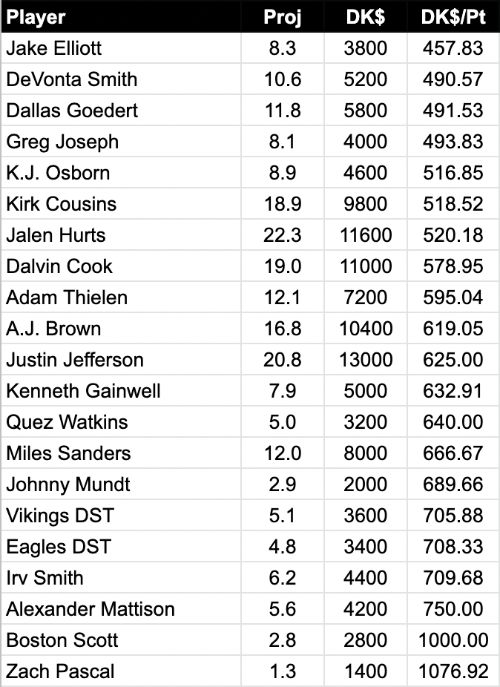 This game lacks the bottom-shelf salary options, so don’t hesitate to include 1 of the kickers. Otherwise, it’s a matter of mixing and matching stars.

According to Football Outsiders, the Vikings played the worst run defense of Week 1. That bodes ill for a matchup with QB Jalen Hurts and the Philly backfield crowd.

The Eagles, meanwhile, checked in 2nd worst, allowing big fantasy numbers to both D’Andre Swift and Jamaal Williams in a narrow win over the Lions. It’s quite possible that in a game featuring Justin Jefferson and A.J. Brown, the showdown keys become Dalvin Cook and Miles Sanders (or other Eagles runners).