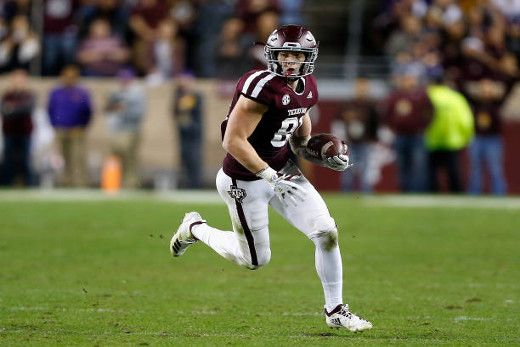 Soon, he’d flash that type of playmaking ability in D-1 company — this time at College Station.

He also received some lofty praise from TE coach Tim Brewster, who brings extensive experience in the collegiate and professional ranks.

“As a pass receiver, I would have to say he’s got a lot of the same elements that Antonio (Gates) had,” Brewster said via The Athletic. “He’s got really outstanding ball skills and his ability to competitively catch the ball is exactly what it’s going to be in the National Football League because you have to catch the ball in tight windows. Jace can go in the crowds and come out with the ball. Then his ability to run routes like a wide receiver — and he truly can; he runs routes like a wideout.”

Let’s see some of that praise in action.

Talk of Sternberger running routes like a WR is no joke. Here's some of his best footwork -- a subtle but highly effective move against highly touted 'Bama LB Dylan Moses. Sternberger tallied a 3-59-1 line against this defense.

Sternberger did a ton of damage up the seam in college, and with fine speed, it's an area he should threaten in the pros. There's extra weight behind that when you consider his post-catch juice.

Sternberger hauls in this next pass despite a slight redirect from a teammate. His hands shouldn't be an issue in the pros, as PFF charted him with a drop rate of 5.7%.

Sternberger absorbed contact well in the first clip -- and he holds on here despite taking another shot. In the games I studied, he did well to secure the ball in traffic.

It's debatable how much we'll see plays like the one below in the NFL. Sternberger tested below average in the vertical jump and has a wingspan in the 30th percentile, per MockDraftable. At least in college, though -- and in the toughest conference in the nation -- Sternberger demonstrated this special ability...

A lack of ideal size hurts Sternberger in the blocking game, which is universally regarded as his main weakness. He's not Mike Gesicki-level bad -- but it's clear this guy effectively has just one year of major college experience. His development in the trenches will be a storyline to watch this summer.

Sternberger's tape was quite impressive. He displayed excellent movement skills, reliable hands and the strength to churn out extra YAC.

He didn't test as a special athlete at the Combine. And he's just adequate in terms of size. All it takes is one team to fall for him, but I'd guess that he's drafted in Round 3 -- perhaps earlier.

One AFC TE coach told NFL.com's Lance Zierlein that Sternberger will catch "50 to 60" balls if his strength improves. His college tape -- and work ethic, from all indications -- say that's a highly reasonable scenario within 2-3 years. Consider Sternberger a top-4 TE despite the stacked class. 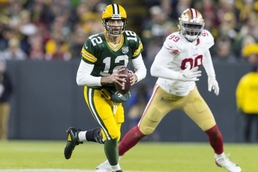 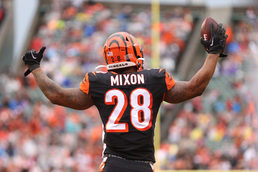 How heavily should we way strength of offense when evaluating fantasy players? Let's see what the numbers from the past 5 seasons say ...

The projections party is done. And these are the guys we couldn't stop fighting over ...

Which rookies do we like more or less than the consensus? And which veterans will feel the impact of the NFL Draft the most? 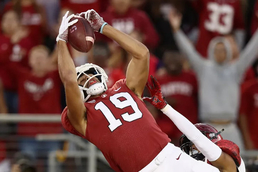