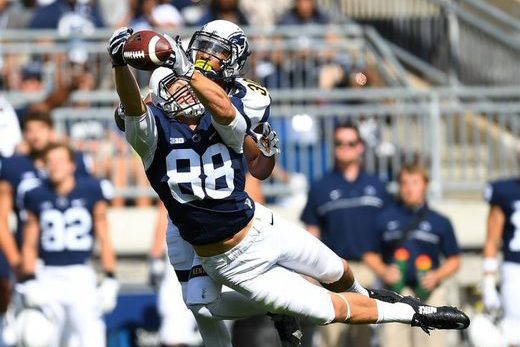 (percentile rank among all TEs at Combine since 1999, courtesy of Mockdraftable.com):

Gesicki arrived at Penn State as a stellar athlete. Beyond football, he finished high school as his alma mater’s all-time leading scorer as well as a dunk-contest champion on the basketball court. Gesicki also lettered all 4 years in volleyball. If you watched many Nittany Lions games over the past 2 years, you probably heard those facts mentioned.

His college career started slowly, though Gesicki appeared in all 13 games as a true freshman in 2014 and then started 8 of 12 in his sophomore campaign. He broke out as a junior, surpassing Andrew Quarless’ school record for receptions by a TE. Gesicki ranked 2nd behind only Chris Godwin on the team in receiving yards and TD catches that season and earned an honorable mention All-Big Ten nod from the coaches.

Gesicki then broke his own receptions record as a senior and led a PSU squad that saw 4 players tally 53-57 receptions. Gesicki also tied for the team lead in TD catches, nabbing 28.1% of the team total in that category.

The tall, athletic TE didn’t feast on big games in college. He did score 2 TDs on 4 different occasions in 2017 but also reached 60 yards only twice, eclipsing 62 once and topping out at 89 yards. Gesicki reached 70 yards twice as a junior, topping out at 88 and averaging 48.5 per game in his best yardage season.

For his career, Gesicki averaged 11.5 yards per catch.

If you encountered it while out walking your dog in the neighborhood, then you’d need to scoop it with a plastic bag and throw it out.

We’ll see plenty of that from college TEs, though. So now let’s check out a play where his assignment appears to be hiding behind his own RT’s butt until the backfield is fully compromised, and then tentatively getting in the way to lighten the shot to his QB on a broken run play.

Who cares, though, right? We only need his receiving points in fantasy. But the blocking here is so terrible that it’ll cost Gesicki potential snaps at least early in his career. And we’re past the days of most NFL teams going run on 1st and 2nd downs before 3rd-down passing situations. If you’re not out there to block as a TE, you’re a situational player.

Of course, there are weak-blocking TEs in the NFL, too. And Gesicki certainly displays the receiving talent to get some team to work on him.

Gesicki turns back like a wideout to make the catch and then shows his athleticism by getting the foot down.

And here’s a nice example of the 6’5.5 leaper high-pointing a downfield heave that the QB probably only tossed because he knew he had a dunk champ in the area …

You might have noticed that I included a highlight reel among the “games watched,” which is certainly not what I normally do. But I watched that in search of more exciting receiving plays. Frankly, I saw plenty of good but not a ton of special.

I might as well just paste Gesicki’s Combine numbers here again. That’s what you and an NFL team will be buying in the Penn State TE. And as if the workout numbers aren’t impressive enough, scroll down to the player comparisons list and you’ll find no other TE supplying more than a 70.8% match. Classmate Dallas Goedert, by comparison, has 4 matches at 80+%. James Hanna -- a 2012 draftee and the top match on Gesicki’s list -- had 2 comps at 80+% and 8 more above 72%.

There’s intriguing athleticism here for sure. And at the right price in rookie drafts -- and in the right NFL landing spot -- he’d be interesting. At the same time ...

"Gesicki is Coby Fleener,” an NFL team source told WalterFootball.com. “Tall, lean, probably will run fast, horrendous blocker - even versus defensive backs. He's got some high-point ability, but I have seen him drop his share of contact catches and contested catches, too. I don't feel he's as a strong as he could be."

Now, Pro Football Focus credited Gesicki with a 75% catch rate on contested balls last year (9 of 12), which led all TEs. And Gesicki doesn’t come across as strong on tape, but his 22 bench reps were at least good enough to hit the 65th percentile among Combine TEs (since 1999).

There’s talent, size and athleticism. But the player needs some refinement to his receiving and a lot of work on his blocking (unless some team wants to make him Devin Funchess). Gesicki will make for an upside shot inside the final 2 rounds of rookie drafts, but I wouldn’t go chasing after him.