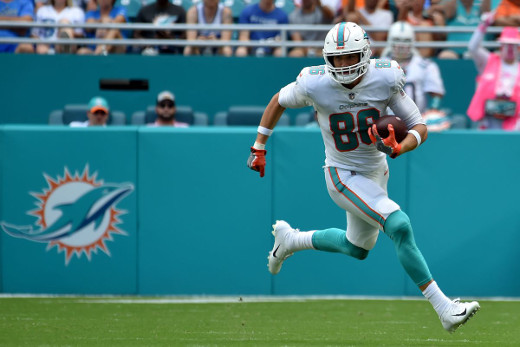 -Gesicki set career highs across the board in 2020 with 53 catches, 703 yards and 6 TDs. He did so despite missing his 1st career game (dislocated shoulder, Week 14).

-He tallied 5 top-10 fantasy weeks and ranked as the TE8 in PPR points per game.

-In Tua Tagovailoa’s 7 full games, Gesicki averaged 6.1 targets, 3.8 catches and 46.4 yards per outing. He notched 4 total scores over that span.

-Gesicki ranked 2nd on the team in targets (85). He saw an OK 15.5% target share, albeit for a paper-thin Miami pass catching corps.

-Miami treated Gesicki more like a WR, aligning him in the slot on 67.4% of his passing down snaps.

-This offseason, Miami added speed to the offense in 6th overall pick Jaylen Waddle and free agent Will Fuller. Their arrival should open up the middle of the field for Gesicki, a plus athlete himself.

-2021 is all about the play of Tagovailoa, who earned Pro Football Focus’ 6th worst passing grade (65.4) among 32 QBs with 300+ dropbacks. A full season removed from hip surgery, the year of experience and likely improved O-line play provide reasons for optimism.

-As of June, Gesicki is entering the final year of his rookie contract.

Gesicki broke out last year for a Dolphins squad desperate for playmakers. The setup looks much different this year after Miami spent significant resources on rookie Jaylen Waddle and veteran Will Fuller.

We’ll be curious to see what this offense looks like with Gesicki’s former TE coach, George Godsey, now the co-OC. But we ultimately don’t anticipate significant usage for Gesicki. With a capped target ceiling, the former Penn State standout is a back-end TE1.

Dolphins TE Mike Gesicki (shoulder) is active for tonight's game vs. the Raiders. There's a chance he's limited in his 1st game back from that dislocated shoulder, making him a risky fantasy option.

Dolphins TE Mike Gesicki (shoulder) was limited in practice all week and is listed as questionable for Saturday night's game against the Raiders. He'll be a risk/reward TE1 if active. We'll get his official status around 6:45 pm ET on Saturday.

Dolphins TE Mike Gesicki (shoulder) was limited in Wednesday's practice. There was a report this past Sunday morning that Gesicki was on track to play vs. New England. He ended up inactive but must have been close to playing. We're tentatively expecting him to give it a go against the Raiders on Saturday night.

Dolphins TE Mike Gesicki (shoulder) is inactive for today’s game against the Patriots. Adam Shaheen and Durham Smythe will share TEs duties. Neither is a bankable fantasy play, especially vs. the league’s 2nd-ranked TE defense.

Dolphins TE Mike Gesicki (shoulder) has a "real chance" to play vs. the Patriots today, according to NFL Network's Ian Rapoport. Gesicki will workout before the game to determine whether he can give it a go. He'll obviously carry elevated risk in fantasy lineups if active. We'll get his game status around 11:30 am ET.