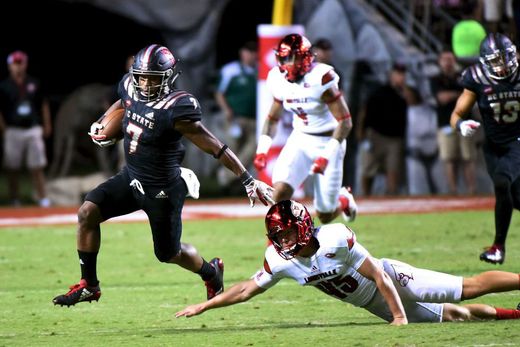 Hines landed at State after running for 5,500 yards and 87 TDs over his final 2 years at nearby Garner High School. He stepped right in as a factor his true freshman year, carrying 48 times, catching 20 balls and serving as the Wolfpack’s lead kick returner. Hines scored a TD in each of those phases, leading the ACC in kick-return yards.

He spent much of 2016 as a wideout, starting 6 of 12 games there, while 2017 Browns draftee Matthew Dayes dominated the backfield work. Dayes and 6 other teammates drew more carries than Hines, but the sophomore ranked 2nd on the team in receptions (accounting for 16.3% of the team total) and 3rd in receiving yards (15.5%).

With Dayes gone, the Wolfpack let Hines take charge of the backfield last season. The junior led N.C. State in all rushing categories, ranking 4th in the conference in rushing yards and tying teammate Jaylen Samuels for 5th in rushing scores. Hines led the ACC in all-purpose yards despite dealing with a mid-season ankle issue and was a finalist for the Paul Hornung Award (nation’s top all-purpose back). ACC coaches voted him 1st-team all-conference at RB and 3rd-team as a specialist.

Off the gridiron, Hines also proved his track-level speed by earning All-America honors as a 100-meter sprinter and running with the ACC-championship 4x100 Wolfpack relay team.

There weren’t many Hines games available, and I couldn’t find anything from before 2017, but these 2 games did flash some intriguing traits.

The speed that produced 4 TD runs of 48+ yards last season is easily evident whenever Hines gets an opening. He should get onto a pro field right away as at least a return man and presents the kind of big-play potential that offensive coaches want to work into the game plan.

Although 2017 marked his 1st full season as a college RB, Hines didn’t run like a converted WR. He appears to sport at least decent vision for developing holes and has the quicks to get to space.

Here he gets an edge vs. UNC that some backs might not be able to reach in time, then weaves back through the defense to turn a nice gain into a huge one …

Oh, and there’s also the potential for something like this at any point …

I don’t know about you, but I’m dizzy now.

The book on Hines seems to be that he needs to refine his receiving skills. I couldn’t watch enough tape to evaluate his hands. Pro Football Focus, however, charted just 2 drops last season and called both “concentration” drops -- meaning Hines failed to secure the catch because he turned to run too quickly.

What I can see is a guy trusted to do some WR stuff. Here he blows by coverage on a go route from the slot right position. There’s no catch because the QB overthrew him, but Hines could have scored on a good throw.

Hines isn’t going to take over an NFL backfield any time soon. He’s just not that type of back. Even as N.C. State’s lead rusher last year, he assumed just 40.8% of the rushing load and scored 34.3% of the rushing TDs. But he’s also not just a fast, little gimmick.

PFF rated him 10th among draft-eligible RBs in elusive rating last season -- along with 3rd in pass-blocking efficiency. Hines collected fewer blocking opportunities than the RBs around him -- generally far fewer -- but he allowed just 1 total pressure among his 41 pass-blocking chances.

Then there’s that matter of being the fastest RB at the Combine. And Hines told the Good Morning Football crew that was the slowest 40 time he’s recorded. Hines said he dropped a 4.31 at the Nike combine for high school players 3 years earlier.

Regardless of the particular facts in that area, Hines presents excuses for getting him onto the field: speed, WR experience, proven kick-return ability and a season as the lead rusher.

He also comes along at the perfect time. Alvin Kamara and Christian McCaffrey each topped 100 targets as rookies last year, and 14 RBs tallied 50+ catches -- more than in any of the previous 3 seasons.

Landing spot will be the final key piece to determining Hines’ value, as we can’t trust all coaching staffs to leverage the talent appropriately. He’ll be an intriguing guy to watch through and beyond the NFL Draft, though. 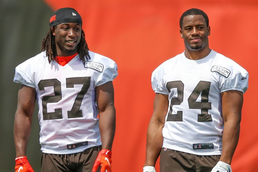