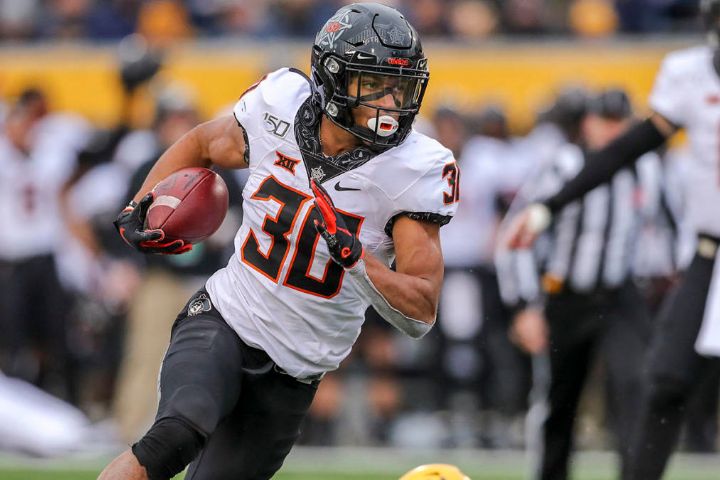 The reported 40 times from Hubbard’s pro day have varied widely, from sub-4.4 to 4.50. Even the slowest of those still puts him slightly above average for the position in speed score. That 3-cone time, however, checks in significantly slower than the position’s historical average of 7.05 seconds.

After a redshirt season, Hubbard joined a Cowboys backfield led by then-junior Justice Hill. He collected just 45 carries through the season’s 1st 9 games, though he averaged 7.0 yards per rush in that span. Hill went down early vs. Oklahoma, however, allowing Hubbard to take over for the final 4 contests. The redshirt freshman topped 100 rushing yards in 3 of those 4 outings, including an 18-145-1 (8.1 per carry) vs. Missouri in the Liberty Bowl. Hubbard also caught 3+ passes in each of those 3 games.

The next season made Hubbard famous. His 2,094 rushing yards checked in 2nd in school history, behind only Barry Sanders’ 1988 total. Hubbard’s 161.1 yards per game beat his nearest Big 12 competitor by 64.6. He ran for 150+ yards in 7 of 13 games and hit 200+ on 4 occasions. Hubbard also scored 2+ TDs 7 times, en route unanimous 1st-team All-America status and Big 12 offensive player of the year honors. (Alas, Jonathan Taylor kept him from winning the Doak Walker Award as the nation’s top RB.)

Touch volume certainly helped. Hubbard averaged 25.2 rushes per contest. The 328 total carries led the conference by 95. His 23 receptions tied for just 4th on the team but accounted for 88.5% of the team’s total RB catches.

Things proved far tougher for Hubbard in 2020. He continued to dominate the backfield early, garnering 20+ carries in each of the 1st 5 games and averaging 110 yards per contest. Hubbard tallied 48.6% of the team’s rushing attempts, 53.1% of the rushing yards and 71.4% of the ground scores over that span. But a high right-ankle sprain in that 5th game knocked things off track.

Hubbard carried just 14 total times over the next 2 games, sat out the following 4 and then opted out for the final 2. For the year, Pro Football Focus rated him well below the position’s average in rushing grade, elusive rating and yards after contact. Hubbard also fumbled 7 times over his final 2 college seasons

I have to say, I came away disappointed that a 2,000-yard back didn’t look more impressive.

The 2019 Tulsa game I watched found Hubbard racking up 256 yards and 3 TDs on 32 carries, his 2nd biggest game in a huge season. But his big plays -- in that game and others -- tend to come on reps like this …

Of course, most RBs will get their biggest gains through well-blocked lanes. That’s obviously not the issue. And the long speed on Hubbard is certainly nice.

The problem is a lack of substance between those big plays.

But Hubbard doesn’t consistently win on power, and his balance through contact looked iffy at various points.

Hubbard looked fine on the receiving reps I saw, though nothing stood out on that front. What did stand out is a lack of strength when he tried to pick up pass-rushers.

If Hubbard’s going to be a 3rd-down type at RB -- and I don’t think he’s big enough (in size or style) to be a “lead” runner -- then his weakness as a blocker just might hurt his chances of getting on the field early.

Because I’m writing this on a holiday, though, I’ll close out this section with the best run I saw from Hubbard among the 5 games I watched.

As we’ve said in some of the other RB scouting report podcasts, there’s a sizable group of RBs waiting to be sorted by the draft capital teams wind up spending on them. I entered this process expecting to have Hubbard near the top of that group. At this point, though, I think he’ll land closer to the bottom.

I just don’t see a special feature to Hubbard’s game. Even the speed didn’t show up in him being especially quick to or around the edge on his runs.

Hubbard’s fine, but his monster 2019 stat line doesn’t match up with what I saw on tape.

We’ll see what the NFL has to say about him come draft weekend, but he looks like just a decent committee back in the pros to me.

For now at least, I prefer Trey Sermon over Hubbard in best-ball drafting. 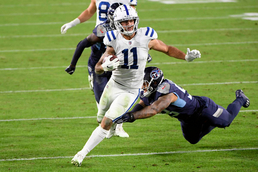 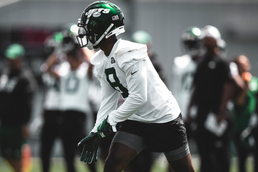