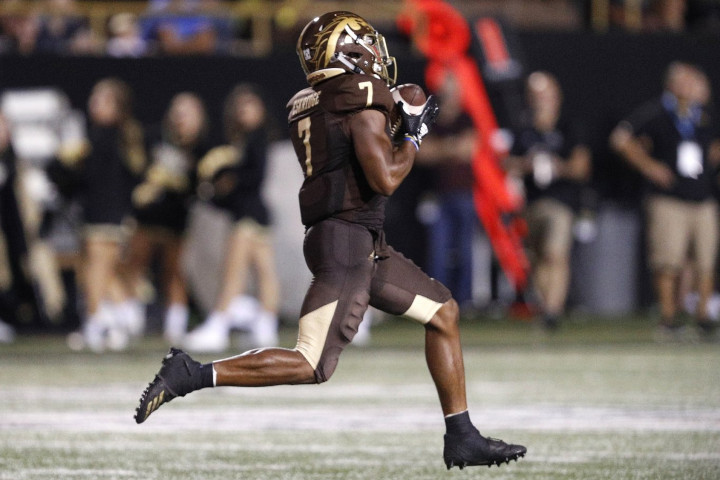 Eskridge was a 3-star RB recruit coming out of Bluffton High School in Indiana, where he ran for 1,020 yards and 16 TDs as a senior. His only known scholarship offers came from Western Michigan and Ball State.

Eskridge chose Western Michigan and immediately made the move to WR. He finished 5th in catches, receiving yards and TDs on a 2016 squad led by then-senior Corey Davis. Eskridge missed 2 games that year with an undisclosed injury.

With Davis off to the NFL, Eskridge stepped into a more prominent role as a sophomore. He led that Broncos team in receiving yards and ranked 3rd in catches and TDs behind redshirt sophomore WR Keishawn Watson and senior TE Donnie Ernsberger.

Eskridge set new career highs in catches and yards in 2018. But he still failed to lead his team in any major receiving categories. Those honors went to freshman Jayden Reed. Eskridge’s market shares remained disappointing: 15.6% of the receptions, 25.1% of the receiving yards and 15% of the TDs. He also missed 2 more games in 2018 with injury.

Eskridge spent the first 4 games of his senior season playing both WR and CB. He totaled just 3 catches on offense and made 14 tackles on defense. His season ended on September 21 at Syracuse, though, with a broken and displaced right collarbone that required surgery.

Eskridge opted to take a medical redshirt and return for another go in 2020. That finally led to a breakout campaign -- albeit in an abbreviated 6-game season. Eskridge topped 100 yards in 5 of those 6 contests, including a 212-yard, 3-score explosion vs. Central Michigan. His 130.7 receiving yards per game led the MAC and ranked 4th in the country. Eskridge dominated market share, accounting for 33.3% of his team’s receptions, 45.1% of the receiving yards and 44.4% of the TDs. He averaged a massive 4.94 yards per route run -- best among 17 of this year’s top WR prospects.

He also added kick-return duties to his resume, averaging a strong 27.5 yards with 1 TD on 17 chances. Eskridge was named MAC Special Teams Player of the Year and First Team All-MAC at both receiver and kick returner.

Eskridge’s game is built on speed. He was simply too fast for many of the CBs he faced last year. This is what most of his long TDs looked like:

Not only is Eskridge fast, he also has explosive acceleration. Watch him go from 0 to 60 in a blink on this screen:

The threat of Eskridge’s speed puts defenders on their heels immediately. Eskridge does a nice job taking advantage of that, snapping off routes in front of them. He’s smooth on in-breaking routes like slants and posts. And he can stop on a dime on comebacks.

Despite going just 5’9, Eskridge has the vertical to climb the ladder for high throws.

He doesn’t look very comfortable in traffic, though. He had 2 drops in the 3 games I watched and also failed to come down with a few contested balls.

Eskridge’s speed will translate to the next level. But as we’ve seen countless times, it takes more than just speed to make it as an NFL WR.

And there’s not much else to like about Eskridge’s profile.

His 2020 production and tape are impressive. But they should be. He was a 23-year-old, 5th-year senior playing against 2nd-tier competition in the MAC. It’s concerning that he didn’t stand out in any of his first 4 years on campus.

Eskridge is small, played against weaker competition, had a late breakout and is entering the NFL at 24 years old. He also missed time with 3 separate injuries over his 5 seasons at Western Michigan.

We’ll see when and where he lands in the NFL Draft, but Eskridge is the type of prospect you should be fading in dynasty rookie drafts.