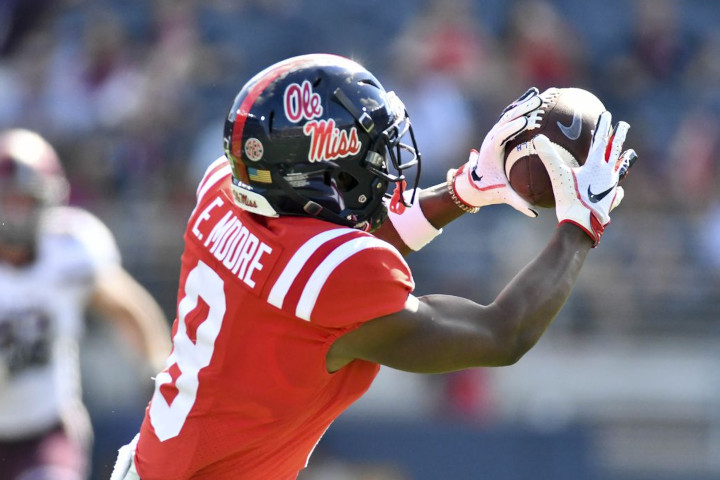 Moore earned a 4-star grade from most scouting services coming out of St. Thomas Aquinas High School in Florida. ESPN tabbed him the 24th-best WR prospect in the class; Rivals had him 34th. Moore received 33 college offers and originally committed to Georgia before switching to Mississippi.

He got on the field as a true freshman, finishing 3rd on the Rebels in catches and 4th in receiving yards and TDs. You might have heard of 2 of the other WRs on that team: A.J. Brown and D.K. Metcalf, who were both juniors at the time. Moore’s freshman campaign included an 11-129 line vs. South Carolina with Metcalf sidelined. He also served as Ole Miss’ primary return man, averaging 18.5 yards per kick return and 3.4 yards per punt return.

Brown and Metcalf’s departures paved the way for Moore to take over as Ole Miss’ top dog in 2019. He easily led a bad passing game in all major receiving categories, accounting for 36% of the receptions, 36.5% of the receiving yards and 54.5% of the TDs. No one else on that team reached even 200 receiving yards for the season. Moore, meanwhile, topped 100 yards in 4 games, including a 9-143-1 effort vs. LSU.

He set new career highs across the board this past season, despite playing in just 8 of Ole Miss’ 10 games. Moore posted 225+ yards in 3 of those outings and went over 100 in another 3. He led the entire country in catches (10.8) and receiving yards (149.1) per game. His 86 grabs set a new school record.

Moore accounted for 44.8% of Ole Miss’ receptions, 41.8% of the receiving yards and 32% of the TDs in his 8 games. He was named First-Team All-SEC, a First-Team All-American and a Biletnikoff Award Finalist.

Moore chose to sit out the final 2 games of the season to start preparing for his pro career.

Moore was schemed plenty of easy touches last season. Some will consider that a knock against him. I say it’s a positive that his coaching staff was so intent on getting the ball in his hands.

Moore is a tough tackle. He has good burst and wiggle in the open field but also runs with more power than you’d expect from a 5’9, 185-pounder. Pro Football Focus credited him with 18 missed tackles forced last year.

And Moore’s tape is chock full of plays that prove he’s much more than just a manufactured touch guy. He’s willing to operate in traffic and make catches while absorbing contact -- important traits for a slot receiver.

He has some of the most reliable hands in this year’s WR class. PFF charted him with just 10 drops on 200 career catchable targets.

And despite his diminutive frame, Moore’s acceleration, speed and ball tracking make him a weapon on deep balls. His 11 catches 20+ yards downfield last year ranked 9th among all draft-eligible receivers.

Watch how Moore turns away from the oncoming safety to protect the ball on this final deep catch. Veteran savvy.

It’s possible that Moore’s height is more of a limiting factor in the NFL than it was in college. Over the last 10 years, there have been only 13 seasons of 800+ receiving yards by a WR 5’9 or shorter. (Steve Smith, who’s probably the most optimistic comparison for Elijah Moore, owns 3 of those seasons and 8 total 1,000-yard campaigns.)

Moore’s weight lands him in a much better bucket. There have been 61 seasons of 800+ yards by WRs 190 pounds or lighter over the past 10 seasons. That cohort includes guys such as Antonio Brown, Tyreek Hill, Calvin Ridley, T.Y. Hilton and Brandin Cooks.

Moore’s frame might contain him mostly to the slot at the next level. That’s where he played 78% of his snaps last year and 90% for his career at Ole Miss. But that doesn’t make him any less exciting as a prospect. 3-WR sets are the predominant personnel grouping in today’s NFL, so Moore will be on the field plenty.

His combination of reliable hands, downfield ability and tenacity after the catch gives him plenty of ways to score fantasy points. I’d even expect his NFL team to use him on end-arounds and jet sweeps like Ole Miss did.

While he might lack the WR1 upside of guys like Ja’Marr Chase, DeVonta Smith and even Rashod Bateman, Moore looks like a guy ready to produce multiple WR3 or WR2-level seasons.

Update: Moore showed out at his Pro Day, blazing a 4.35-second 40-yard dash and, perhaps more importantly, a 6.66-second 3-cone. That's elite agility -- important for a player of Moore's archetype.