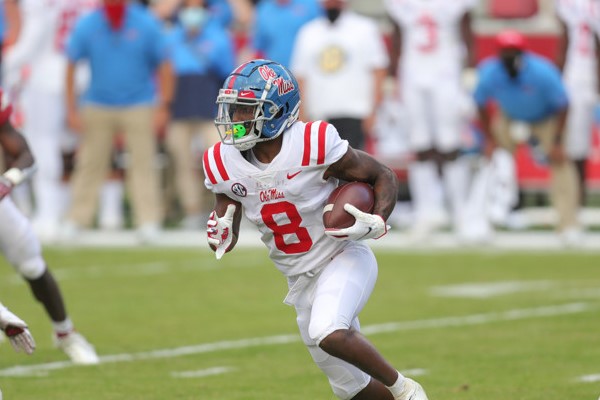 He caught a 3-yard TD pass in the back of the end zone to close out the team’s initial scoring drive (which opened at the Philly 21-yard line thanks to a big kick return from Braxton Berrios). Moore had a 4-44-1 receiving line on 5 targets by halftime.

It’s still not a great situation, but Moore is already operating as a clear lead WR. With Corey Davis headed for season-ending core-muscle surgery, that should continue.
Week 12
Moore maintained his target lead in QB Zach Wilson’s return from 4 weeks down with a knee injury. Moore drew 8 targets among Wilson’s 24 attempts (33%) in Sunday’s win over the Texans, doubling his nearest teammate (TE Ryan Griffin, 4). Moore caught 4 of those looks for 46 yards.

Nearly half of that yardage came on a 22-yard catch-and-run in the 3rd quarter. It’s worth noting that 2 of Moore’s 3 shortest single-game average target depths have come in Wilson games. Sunday’s 6.4 ADOT followed games of 11.5, 15.0 and 10.3. It was his shortest since the Week 8 win over Cincinnati, Mike White’s 1st pro start.

The Jets should also be in better spots for target volume going forward. Sunday’s win was just the team’s 3rd of the season and found the Jets attempting 8 fewer throws than their previous low mark. The team is averaging 38.5 attempts per game for the year.
Week 11
In Joe Flacco’s first start of 2021, Moore posted another big fantasy game: 8 catches, 141 yards and 1 TD. He led all Jets with 11 targets — a 28.2% share. Moore has now hit 10+ PPR points in 4 straight. Zach Wilson might return for Week 11, but the Jets’ next 2 matchups (at Houston, vs. Philadelphia) give Moore spot-start value.
Week 10
Even with the return of Corey Davis, Moore saw his weekly volume. He caught 3 of his 6 targets for 44 yards and a TD. It was the 6th time in 7 games that Moore saw 6 or more targets. He also found the end zone for the 2nd straight week.

Going forward, despite being in an inefficient offense, the Jets continue to play in negative game scripts leading to plenty of volume for Moore. He won't have massive yardage upside but consistent work should lead to solid performances especially if he continues to find the end zone.
Week 9
Moore scored his first 2 NFL receiving TDs in Thursday night’s loss to the Colts -- the 1st from QB Mike White and the 2nd from QB Josh Johnson. Because of course.

It was an impressive performance from the rookie, who was creating big separation all night. He matched a season-high with 8 targets and set new season highs with 7 catches and 84 yards. That followed a 6-67 line in Week 8.

Moore still played just 60% of the Jets’ offensive snaps in Week 9, though, and ran a route on 63% of pass plays. Those marks were up from the previous few weeks, but we still need them to be higher if Moore is going to be a reliable fantasy play. We’ll also need to see who starts at QB for the Jets in Week 10.

Moore should be owned in fantasy leagues of 12+ teams, but we’re not yet ready to trust him in fantasy lineups -- especially in a tough Week 10 matchup vs. the Bills. After that come much better draws vs. the Dolphins and Texans.
Week 1
Not the debut Moore was looking for. He finished with 1 catch on 4 targets for minus-3 yards. That “catch” came on a jet sweep that the Panthers defense strung out for a loss.

Moore did have some opportunities in this one. He just missed a diving catch on a deep ball in the 1st quarter. And he had a 22-yarder up the left sideline called back by an illegal formation penalty.

Encouragingly, Moore played 86% of the Jets’ offensive snaps and ran a route on 85% of pass plays. We’ll see what happens to those rates when WRs Jamison Crowder and Keelan Cole return, but we’re expecting Moore to remain a top 2 WR for the Jets.

We wouldn’t trust the rookie in Week 2 fantasy lineups -- but he should certainly remain stashed on benches.

We’re high on Moore as a dynasty asset. His athleticism and production profile are both extremely strong. If Moore stood 6’0 instead of 5’9, he’d likely have been a top-20 pick back in April.

In year 1, though, with an offense sure to go through growing pains, we’re not expecting significant fantasy contributions. Unless Jamison Crowder is off the roster, Moore is just an end-of-roster stash.

The Jets on Saturday placed WR Elijah Moore on IR for his quad injury. That knocks him out for at least the next 3 games, which makes the rookie droppable in most cases if you don't have an extra spot to stash him. Week 17 would be the earliest Moore can return. His absence boosts the target outlooks for Keelan Cole and Jamison Crowder, as well as Jets RBs.

Jets WR Elijah Moore (quad) is listed as questionable for this weekend’s game vs. the Saints. He didn’t practice all week but is expected to test the quad on Saturday. Stay tuned for updates on his status. His game kicks off at 1 pm ET on Sunday, so we’ll know whether he’s active around 11:30 am.

Jets WR Elijah Moore (quad) missed his 2nd straight practice on Thursday. His injury isn't believed to be serious, but the rookie's Week 14 status is in question. We'll see if he practices on Friday and then how he's listed on the final injury report.

Jets WR Elijah Moore is "day to day" with a quad injury, HC Robert Saleh said Wednesday. Saleh added that he's "hopeful" Moore will be able to play vs. the Saints on Sunday but will know more by the end of the week. We'll keep a close eye on Moore's practice participation over the next few days. The rookie ranks 2nd among WRs in half-PPR points over the last 5 weeks.

Jets WR Elijah Moore (concussion) isn’t listed on the final Week 5 injury report after getting in full practices on Thursday and Friday. He’ll return for Sunday morning’s game vs. the Falcons in London but is only a desperation fantasy play at this point.