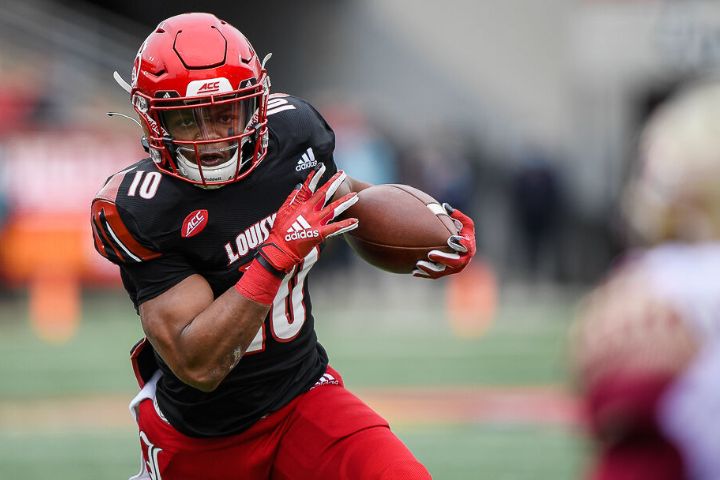 Some outlets -- such as PlayerProfiler.com in the link above -- add 0.05 seconds to Pro Day 40 times to account for historically faster times in that testing vs. dashes run at the Scouting Combine. Even the fastest reported 40 time for him still combines with that weight to put Hawkins well below average at his position in speed score.

Hawkins came on over his final 2 years in high school. He topped 1,500 all-purpose yards as a junior, including 788 on the ground and 509 receiving. His receiving yardage dipped to 134 in his senior campaign, but Hawkins rushed for 1,783 yards on 198 attempts. He hit the recruiting scene with a 3-star rating by multiple services and chose Louisville among 19 offers.

As a 2018 freshman, Hawkins garnered 3 total touches across 3 games before taking a redshirt. He hit his 2nd year ready to take over the Cardinals backfield, though.

After 3 Louisville players drew 70+ carries in 2018 with on one cracking 80, Hawkins more than doubled his nearest competitor in 2019 rushing attempts. His 264 totes accounted for 46.9% of the team total, under new HC Scott Satterfield. Hawkins also delivered 54.7% of the team’s rushing yardage and 39.1% of the rushing TDs. He ranked 7th in FBS in rushing yards per game (117.3).

Although the team played 11 games in 2020, Hawkins opted out after 7 weeks. Over that span, he claimed 52.8% of Louisville’s carries and 58.3% of the rushing TDs, while matching his per-game yardage output (117.4). Hawkins also dramatically increased his receiving presence, collecting 12.4% of the team’s receptions over his 7 games. His 16 catches quadrupled his 13-game total from the year before.

Hawkins said he earned the nickname “Playstation” back in Pop Warner -- both from his dad bugging him about playing video games too much and for his moves on the field. You can be sure the people using the nickname at this point are referring to his on-field play.

He has impressive vision to find the opening even when he’s running toward a wall.

And despite the below-average speed score, long speed sure doesn’t look like an issue.

Hawkins is also quick to the line and decisive in his moves.

Hawkins picked up a 1st down on 3rd-and-short in that clip, at least in part by outrunning to pursuit from the closing edge defenders. But that’s just the kind of opportunity he’s not likely to get in the NFL.

The biggest problem I found in the 4 games I watched of Hawkins: He’s tiny. So let’s jump to the next section to dig further into that.

Hawkins opted out before the end of November to prepare for the NFL Draft. By his March pro day, he weighed in just 1 pound heavier than the 182 at which Louisville listed him.

You need about 170 PPR points to reach the top 24 among RBs for a season right now. The last time a RB cracked 160 points in an NFL season at less than 190 pounds was Warrick Dunn back in 2008.

If we push the bar up to 190 pounds and hope for Hawkins to add weight, then we find 8 more seasons since Dunn’s last:

Concussions kept us from seeing what else Best could accomplish. Breida has seen 2 years of decline since his apparent Year 2 peak.

Sproles and Lindsay each entered the NFL after multiple years as workhorses. Even Lindsay -- an undrafted free agent with the Broncos -- racked up 117 college receptions.

Perhaps most importantly: All 4 of those guys are/were bigger than Hawkins.

It would be easier to envision a significant NFL role for Hawkins if he’d seen more receiving usage in college. He might have that aptitude. Pro Football Focus charted him with 0 drops at Louisville, and Hawkins caught 32 balls at 20.1 yards per reception over 2 starting seasons in high school.

But it’s tough to project worthwhile NFL numbers in an area that didn’t find Hawkins featured in college.

He was a beast in the run game, averaging 20.3 carries per contest in his breakthrough redshirt freshman season and 19.85 per outing over the past 2 years. The little guy even racked up 25+ carries in 5 of those 20 games. But he’s clearly not heading for usage anywhere near that in the NFL.

NFL.com’s Lance Zierlein compares Hawkins to Nyheim Hines, but that strikes me as overly hopeful. Hines caught 89 balls over 3 seasons at N.C. State, compared with Hawkins’ 21 at Louisville. Hines’ run included him basically spending his sophomore season as a WR.

PFF’s Mike Renner comp of Noel Devine looks more realistic. Devine enjoyed a stellar career at West Virginia. Then he measured in at 5’8, 179 pounds and has never gotten an NFL touch.

Jacquizz Rodgers -- a 5th-round pick by the Falcons in 2011 -- came to my mind as I watched Hawkins. PlayerProfiler just happens to give the same “Best Comparable” by measurables for both Rodgers and Hawkins: Kendall Hunter.

Rodgers racked up even more college receptions (151) than Hines or Lindsay, and that was the only area in which he made much NFL impact (2 years of 50+ catches). Hunter didn’t do anything. And it’s worth noting that each guy checked in at 195+.

Hawkins was a fun college player, but there’s not much to grasp onto here for his fantasy future. We’ll see if the NFL says otherwise.