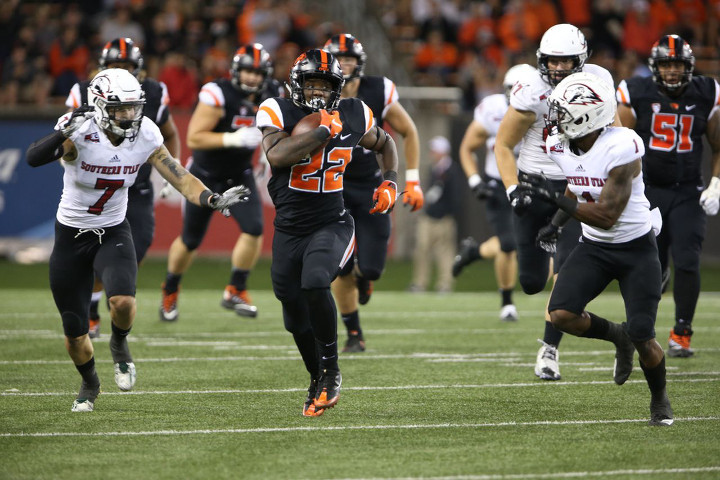 A 3-star recruit, Jefferson quickly made a huge impact for the Beavers.

Across 12 games in 2018, Jefferson’s 1,380 rushing yards marked a true freshman record. He even snagged 25 of 27 targets. Jefferson played ahead of Artavis Pierce — a junior at the time — who made only 8 appearances due to injury. The Bears added Pierce as a UDFA after the 2020 draft.

Foot and ankle injuries forced 3 absences in 2019. His efficiency dropped (4.8 yards per carry), while his receiving production lagged across 9 games: 11 targets, 9 catches, 85 yards.

Jefferson played 6 of 7 games in 2020, missing 1 to the COVID-19 protocol. He looked more like the guy who burst onto the college scene in 2018, hitting 100 yards in all but 1 outing. Yet he remained unimpressive as a receiver. Jefferson again tallied 9 catches on 11 targets.

“Every scout I talk to, they already say I’ve improved in my pass protection and pass protection identification,” Jefferson said via NBC Sports. “One thing they’ve said they want to see more of during this past season is start catching the ball more out of the backfield. But I just played that today [at OSU’s Pro Day].”

Now, in terms of testing, Jefferson’s Pro Day was a disappointment. His straight-line speed tested out average. But the broad and vertical jumps — plus the short shuttle and 3-cone times — all fell shy of the 50th percentile among Combine RBs since 1999 (per MockDraftable).

So we’re not looking at some Saquon Barkley-like freak. Of course, that’s not a requirement to thrive at RB.

Ask Jefferson what he does best, and it’s not something you can measure.

“I think I see a lot of things that other running backs don’t see, to be honest,” he said. “So I think that’s one of my best abilities. And I’m going to play hard. I’m going to play until the game ends. [I have] that mental and physical toughness.”

Let’s get to the tape.

Jefferson busted off a couple of long runs across the 3-game sample. But if you're just looking at the box score ... it's misleading.

In this first run, Jefferson deserves credit for hitting the right hole and navigating the initial traffic. But look at #6 for Oregon. If he plays through the whistle, there's no way this run goes 82-yards -- Jefferson's career-long by 20 yards.

Jefferson hits the right hole again in this next clip. Vision does indeed look like one of his top traits. But he gets an excellent block (hold?) from #84 before the safety completely takes himself out of the play.

He fared OK in Pro Football Focus' Elusive Rating, as his 72.3 mark placed him slightly above average in this class. Jefferson's not going to win with flashy moves in the pros, but he regularly showed bounce and wiggle with bodies around him.

Another cut and a burst through the line...

Nothing in this film study turned up anything of note in the receiving game. PFF did chart Jefferson with only 1 dropped pass on 44 catchable targets. And while it's hard to look past his 18 catches over the final 2 seasons (15 games), Jefferson at least wasn't phased out in that area at OSU. In 2020, backups B.J. Baylor and Calvin Tyler Jr. combined for just 7 receptions.

Dane Brugler of The Athletic believes Jefferson "currently lacks the technique or anchor to stonewall [defenders]" in pass protection. There wasn't much of a sample for me to see, but there was this ugly rep that underscores Brugler's sentiment...

Jefferson is a cerebral runner with a clear ability to find holes. While he lacks top-end long speed, his 1.59 10-yard split ranked ahead of highly regarded guys with similar size like Kenneth Gainwell (1.62) and Michael Carter (1.65). He's not a plodder.

Now, playing through contact might be an issue in the pros. Jefferson brings average size and didn't show a ton of power at Oregon State. Also, it remains to be seen just how much teams will trust him on 3rd downs -- especially right away.

A projected late-round pick, Jefferson is likely looking at a developmental year in 2021. He's at least on the young side (21), but I can't say I'm too intrigued by his overall profile. He's currently our RB9 in this class.