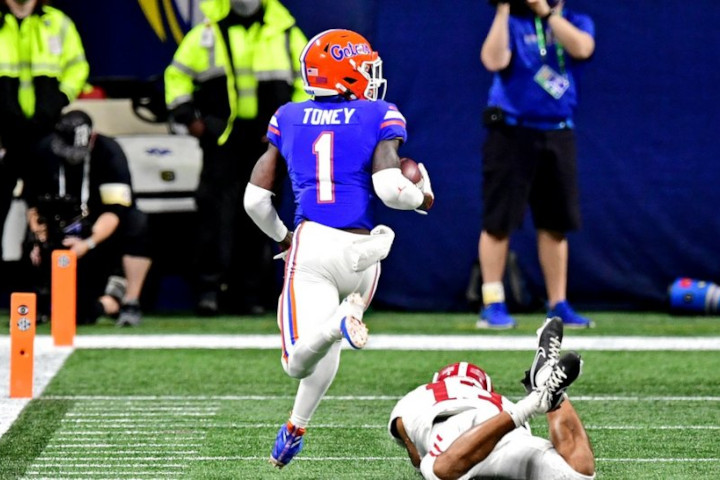 Toney will enter the NFL with just 1 season of experience as a full-time WR across his high school and college careers.

He dominated at QB for Blount High School in Alabama, racking up 6,498 yards and 69 TDs through the air plus 1,790 yards and 31 scores on the ground over his final 2 seasons. He was recruited as an “athlete” with a position switch in mind, ultimately choosing the Gators over offers from at least 7 other schools, including Alabama and Auburn.

Toney played some RB, WR and Wildcat QB as a freshman in 2017. He caught 15 balls, ran 14 times for 120 yards (8.6 YPC) and a score and completed 1 of 2 passes for 50 yards. Toney missed 3 games that year with a “myriad of injuries,” according to the school’s official website, that included at least shoulder and shin ailments.

Toney played in 12 of 13 games as a sophomore in 2018, splitting time at WR and Wildcat QB. He finished 4th on the team in catches and 5th in receiving yards, adding 240 rushing yards on 21 totes. His only pass attempt went for a 20-yard TD.

The injury bug bit Toney again in 2019. This time it was a September shoulder injury that cost him 6 games. He remained in a gadget role in his 7 healthy contests, topping 2 catches just once. Toney also took a step back on the ground, averaging a career-low 4.9 yards per carry on 12 attempts.

So his 2020 breakout came as a surprise. Toney finally focused on playing WR full time and enjoyed good health, playing in 11 of 12 games, opting out of the Cotton Bowl. He led the Gators in catches and receiving yards, finishing 2nd in TDs to TE Kyle Pitts. Toney’s market shares in his 11 games: 23.6% of the catches, 23.0% of the yards and 22.2% of TDs.

Toney continued to contribute on the ground, taking 19 carries for 161 yards and a score. He also served as the team’s primary return man, averaging 22.1 yards on 7 kick returns and 12.6 yards with 1 TD on 11 punt returns. Toney was 1 of just 3 FBS players with a rushing, receiving and punt return TD in 2020.

I still think Rondale Moore is the best WR in this class with the ball in his hands. But Toney at least makes it an argument.

With his vision, burst, contact balance and leg drive, Toney could probably make it as a RB. He broke 32 tackles on 80 catches the past 2 seasons, per Pro Football Focus.

In the route-running department, Toney flashes potential just based on pure athleticism.

But he’s raw. Toney played 82% of his snaps and caught 79% of his passes from the slot last year. He ran a limited route tree, with the vast majority of his work coming near the line of scrimmage. His 7.7-yard average depth of target ranked 320th among WRs.

And Toney often tries to do too much with his routes, resulting in a lot of wasted movement.

Although he caught just 7 balls 20+ yards downfield last year, he has the potential to develop in that facet thanks to his acceleration and speed.

Of course, that was the 1st season that he spent focusing on the WR position. That gives him more room for growth than most prospects. He’s ready to make an immediate impact with the ball in his hands and certainly has the athleticism to develop into a plus route runner. Toney tested as an 89th percentile athlete at his Pro Day.

But how often do we see these raw WRs really work out in the pros? Mecole Hardman is the latest example. It’s too early to write him off, but his first 2 seasons have been disappointing.

Curtis Samuel might be the best-case scenario for Toney’s development. Samuel started his Ohio State career at RB and didn’t spend much time out wide until his final college season. He got off to a slow start in the NFL but has improved his numbers every year and finished as a top-30 fantasy wideout in 2020.

Samuel was drafted at just 20 years old, though, while Toney is already 22. There are also real durability concerns here after Toney missed 10 games with injuries over the past 4 seasons.

His best chance at a significant fantasy impact will be landing with a team that will maximize his open-field ability, getting him the ball on quick-hitting passes, plus jet sweeps, end-arounds and maybe even straight handoffs. Just like the Panthers did with Curtis Samuel.

Update: The Athletic's Dan Brugler notes that there are off-field concerns with Toney after 2 incidents while at Florida. He was "suspended for the 2018 season opener after his involvement in an on-campus confrontation between players and Gainesville locals where he painted an air-soft gun to look like an AR-15 assault rifle." Then Toney was "pulled over by Gainesville Police, which revealed an authentic and loaded AR-15 rifle in his back seat (July 2018) that Toney had 'for protection because of the locals' (no charges filed)." 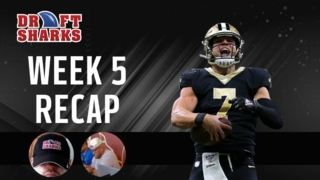 Let's talk through Taysom Hill and whatever else happened in fantasy football Week 5 ... Top targets at each position for Week 1 FanDuel tournaments. A quick look at the 21 players that moved up or down the rankings over the past week, including Antonio Gibson, Kenneth Walker and George Pickens.