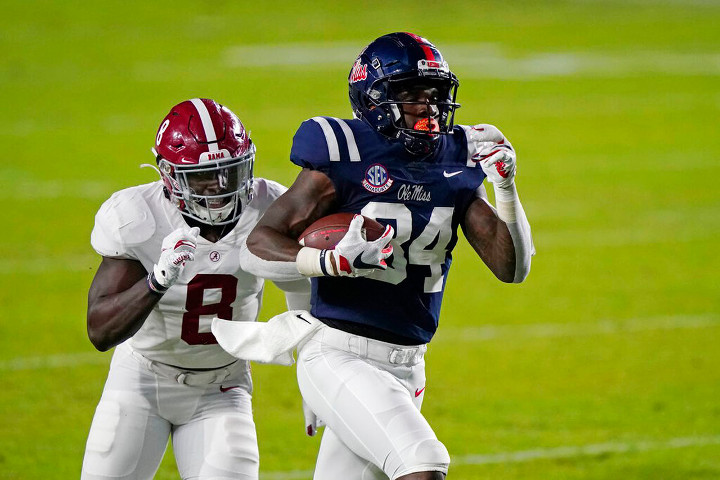 Yeboah couldn't finish his workout due to a hamstring injury.

He went on to start 38 games across 4 seasons with the Owls. As for production, though, there wasn’t much to speak of.

Following a redshirt year in 2016, Yeboah finished 8th on the team in catches and 7th in yards. That 2017 team included WRs Keith Kirkwood (currently a Carolina Panther) and Isaiah Wright (currently of the Washington Football Team). Yeboah stayed in a reserve role for 2018, while his production remained stagnant.

2019 at least provided a career-high 5 scores. Yeboah, however, battled a hamstring injury that originated in August. He topped 1 catch in just 3 of 11 games.

Yeboah was highly efficient, tallying 19.4 YPC and 2.25 yards per route run. Per Pro Football Focus, the YPRR figure ranked 3rd last year among qualifying TEs. We’ll see examples below, but he really excelled against Alabama (7-181-2) in a 63-48 loss.

2020 wasn’t all gravy. Yeboah went down with injuries to his groin/hip flexor on November 14. He suited up the next week vs. Mississippi State but admitted he wasn’t at 100%. Then came an opt-out to prep for the draft.

Let’s see how his game will translate to the pros.

Now, in the 3 games I studied, Yeboah also spent plenty of time out wide. His size made him a mismatch for a lot of college defenders.

Here he is working downfield against Alabama's Malachi Moore, a freshman but the #8 safety in his class, per 247Sports. Moore also made the SEC's All-Freshman Team.

Yeboah proved excellent after the catch. Below, he avoids the jam and puts a nice open-field move on junior 'Bama S Daniel Wright.

Call this a borderline drop because of the QB's ball placement. But Yeboah still had suspect hands in college with 13 drops on 87 catchable targets, per PFF.

Here's what Yeboah said on his blocking early last year....

"I think of myself as a pass-catcher and a blocker. I know a lot of people say it, but if you turn on the film, I block. I actually enjoy blocking. I enjoy pancaking people," Yeboah said in an interview with The Grove Report in spring of 2020. "I take pride in my blocking. If I miss a block, I'm going to get pissed off. It's something that a lot of people don't know about me, but it was part of the Ole Miss pitch to me."

The tape shows he struggled to body up defenders, especially in space. The last 2 clips are in the same quarter of a loss to Arkansas. Clearly, improved blocking will be critical to getting Yeboah on the field.

Even as an older prospect — 23 in October — Yeboah still shows a raw game. He has a ways to go as a blocker. And he needs to improve his hands to become a reliable member of a team's passing attack.

Ultimately, Yeboah profiles as a mid to late round draft pick with developmental upside. He’s primarily on the rookie draft radar in FFPC formats.